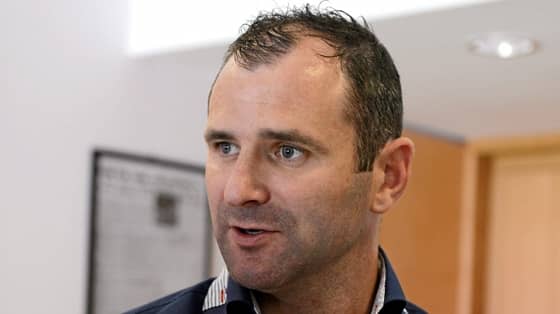 A county Armagh parent has hit out at his local school’s selection policy which he describes as “absolutely disgraceful” following his son’s nursery school rejection.

Former Armagh GAA player and three-time all-star Steven McDonnell, whose three-year-old son Cahir was denied a place at Cloughoge nursery, says he is baffled by the decision.

This year the Cloughoge Primary School Nursery received 70 applications for its 52 places and children from the Upper Killeavy parish are given first preference.

“We never expected anything like this as we believed that we were always within the parish boundaries of Upper Killeavy,” said Mr McDonnell.

“We have never had any concerns, issues or queries regarding my three other children which is why this has come as a huge blow to us.

“Nothing unusual has changed in our family circumstances as we have lived in the same house for the last 13 years so we cannot understand why this is the case now.”

The topic of nursery school places has always been a hotbed of contention across Northern Ireland, with complaints surrounding the selection process surfacing each year – in some cases children as close as 500 metres from the school have been turned away.

Mr McDonnell added: “Cahir already has two brothers at the school. Myself and my wife went to the old Cloughoge school which is up above the Cloughoge bridge.

“My sister attended the relocated school. I have two brothers who attended; my wife Lisa had five sisters and a brother who all attended the school. It’s our local school that we’ve had over 40 years of affiliation to.

“I am voicing my opinion for the benefit of our kids and their education; not only for them but for the families of those kids who will be declined places at their own local schools – it’s absolutely disgraceful that this has gone on.”

The problem stems from the fact the school believe Mr McDonnell and his family live in the parish of Middle Killeavy and not Upper Killeavy – a fact he firmly disputes.

“We requested a meeting with the principal Kate O’Hanlon and we met with her. It was a heated discussion and there was a lot of anger vexed from ourselves; Mrs O’Hanlon was firm in her stance as well, and it basically boils down to the fact they said we live in the parish of Middle Killeavy which is completely wrong!

“I’m asking for common sense and justice. We provided parish envelopes to prove that we are in fact from the Upper Killeavy parish.”

The family were unable to obtain an official parish boundary map and subsequently had their appeal thrown out.

A letter from the Independent Appeal Tribunal read: “Mr McDonnell stated that the grounds for appeal was that Cahir lives in the Parish of Upper Killeavy and therefore meets Criterion 5 and not Criterion 6 as deemed by the school. Mr McDonnell presented a letter from Mr D Bradley, SDLP and from the local Gaelic Club both of which state that the McDonnell family live in Upper Killeavy. In addition Mr McDonnell presented a box of parish envelopes which he stated had been issued to the family by Fr Naughton.

The letter continued: “The Principal stated that the family’s address had been verified by two parish priests as being in Middle Killeavy and hence the school had deemed that Cahir met Criterion 6 – ‘Children born between 2 July 2011 and 1 July 2012 whose parent(s)/guardian(s) reside in the traditional catchment area of Middle Killeavy.’

“Discussion followed on the availability of the map of the school’s catchment area. the Principal drew Members’ attention to the statement in the pre-school information booklet published by the SELB that states ‘a certified copy of the boundaries of the Parish of Upper Killeavy and the traditional catchment area of Middle Killeavy Parish is available for inspection in the school. Mrs McDonnell had confirmed that she had not asked the school to view the map.

“The Principal outlined that the school was oversubscribed at Criterion 5 – ‘Children born between 2 July 2011 and 1 July 2012 whose parent(s)/guardian(s) reside in the traditional Parish of Upper Killeavy’ at which point the sub criteria were applied.”