Fearon calls for voting age to be lowered 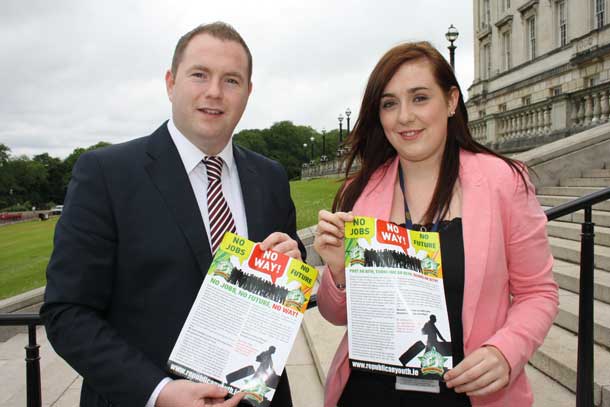 NORTHERN Ireland’s youngest Assembly member – Newry and Armagh MLA Megan Fearon – is to bring forward a motion calling for the voting age here to be lowered to 16.

The 20-year-old Sinn Fein representative replaced Newry and Armagh MP Conor Murphy in June, as he stepped down as an MLA after 14 years, in line with party policy to do away with so-called ‘double jobbing’.

Ms Fearon – who studied politics, philosophy and economics at Queen’s University – has been a Sinn Fein activist for five years. She has been heavily involved in youth work in her native South Armagh.

Now she wants to throw down the gauntlet and challenge others in the Assembly chamber to give a more active voice to young people in the Province – by letting them have their say at the polls at 16, rather than 18.

The Sinn Fein MLA will bring  the motion to the floor of the Assembly – in conjunction with the Green Party – on November 6.

“Many young people are feeling disenfranchised from the electoral process, even though, at 16, young people are very politically aware and able to make informed choices,” said Ms Fearon. “It is important their voice is heard.

“I will be calling on the Assembly to support a change to legislation that will empower young people with the right to vote.

“This is already being supported through the EU in Written Declaration 27, that calls for the EU member states to lower the minimum voting age.

“Elected representatives across the board need to waken up and recognise the widening gap between themselves and the citizens – especially the younger generation – they represent.”

Prior to Ms Fearon’s summer arrival in the Assembly, the youngest of Northern Ireland’s 108 MLAs had been her party colleague, South Down Assemblyman Chris Hazzard (ALSO PICTURED).