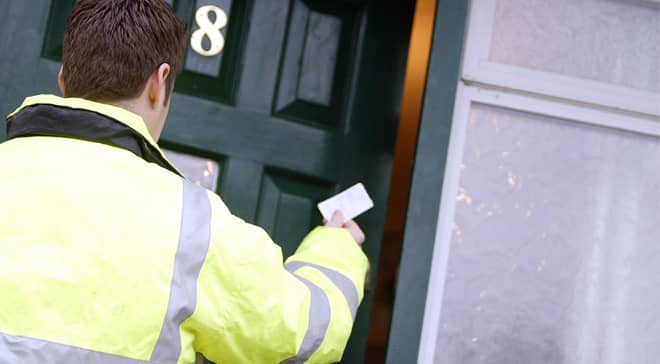 Police in E District are warning residents to be vigilant of bogus callers following two distraction burglaries in the area yesterday (Monday).
Around 1pm on Monday, a male claiming to be from NI Water called to a house in Ballyoran Park, Portadown.
The man was on foot and, after entering the house of a woman, he filled basins of water and checked cupboards.
The man left the property a number of times to speak to his colleague although no one else was seen.
The occupant later discovered that a sum of cash had been taken from a handbag in the cloakroom.
The man in this case is described as being around 40 years old, of medium build and was wearing a dark baseball hat and navy blue tracksuit. He spoke with an English accent.
In the second incident, a man called to a house in Edenderry Terrace, Banbridge, between 4pm and 4.30pm.
The man told the female occupant that he was carrying out work to the rear of her property and needed a look at her back garden.
He ascertained that the occupant was at home alone and went to the back garden.
When the woman came out to the garden through a rear door, which was left ajar, she spent approximately 20 minutes speaking to the man at the bottom of the garden.
The man left the garden through the gate and the occupant found the rear door closed.
When the occupant entered her home she discovered that rooms in her house were ransacked and a sum of cash and bank cards taken.
The man in this case is described as being around 5ft 6in – 5ft 8in tall, of stocky build and aged between 50 and 60 years old.
He was wearing a plain grey, round neck, short sleeved T-shirt and tracksuit bottoms. He spoke with a heavily accented voice, possibly north coast or English/Scottish.
Police are appealing for information in relation to both of these incidents and can be contacted on the 101 non-emergency number.
Police are also reminding residents to protect themselves against bogus callers.
PSNI Crime Prevention Officer, Michelle Wilson explained: “Bogus callers depend on the good nature and good will of others. They tend to target the more vulnerable members of our society and, in particular, older members of our community. It is always advisable to be cautious of unexpected callers.
“Everyone should follow this advice when dealing with unexpected visitors.
“Before answering your door, ensure your back door is locked.
“Think before you open the door – use your chain and spy hole or look out of the window to see if you recognise them. “
If you have any doubts about anyone calling to your door don’t let them in. Ask the caller to come back later and arrange for a friend, relative or neighbour to be present on their return.
“Ask callers for proof of identity and telephone Quick Check on 0800 013 22 90 and the person on the other end will check the caller at your door is legitimate. The service is free and operates 24 hours a day. Genuine callers will not mind waiting until you have checked that they are who they say they are. “
Be aware of callers who attempt to distract you by claiming that they have seen something untoward in your rear garden or somewhere that may encourage you to leave your house – they  may have an accomplice who is waiting to act upon this distraction.
“Neighbours can also play a part in helping protect the more vulnerable in  their community. Residents should try to look out for one another and report ALL suspicious activity to the police immediately. The non emergency police number  is 101. In an emergency dial 999.”
Read more news:
Forensic scientists called in to examine “certain items” at murder victim’s address
Cross-party panel expected to respond to Gillis Unit relocation plan
‘Shared education’ bid for Armagh expected to be resubmitted shortly
Planning application to open airsoft facility at disused quarry withdrawn
Police urge vigilance around schools after vandalism and fire in Poyntzpass