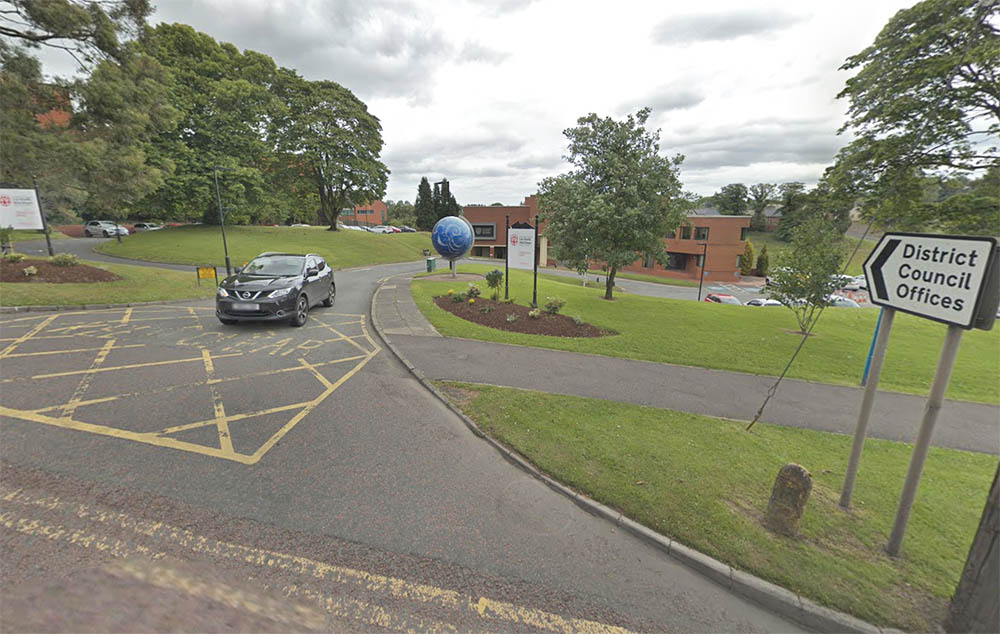 Tempers flared during a meeting of Mid Ulster District Council as, for the second time in nine days, calls to review Council’s dual language street sign policy were put to a vote.

On Tuesday, October 13, members of Council’s environment committee voted on a proposal brought forward by Councillor Trevor Wilson to review the policy.

This proposal was defeated with seven committee members voting against it and six in support.

At Council’s monthly meeting held on Thursday, the issue was brought forward by Council’s Vice Chair, Councillor Meta Graham with her proposal to review the policy, seconded by Councillor Mark Glasgow.

The proposal was defeated with 23 votes against and 14 for.

At Council’s monthly meeting, Councillor Graham said she had still not been given an answer to her question about the wording of the policy and the implementation of the dual language street signs.

“None of the signage that I have seen is displayed ‘adjacent to’, Irish is always given prominence over English and I would ask again why this is the case?”

The Vice Chair requested the minutes be updated “for accuracy purposes” and questioned why a councillor had put forward a “false request” explaining  the letter was purported to have come from a resident.

“How can a letter be sent in and signed by an occupier of the road or street in question but be submitted without their knowledge,” asked Councillor Graham.

“This was a public declaration of an abuse of the policy.

“As such, I propose that the policy is reviewed and also that before any more time or money is wasted on surveys, building control should contact the applicant to check the validity of the request. This whole thing is a disgrace.”

In response, Councillor John McNamee said that if Councillor Graham is not familiar with the design of signs and the workshops that took place a number of years ago then “some of her party would need to update her about that”.

The Sinn Fein representative proposed that things continue as they are. This proposal was seconded by Councillor Ian Milne.

Independent Councillor Dan Kerr said he was the councillor who submitted the request in question and was simply performing an administrative function.

“There is no attempt to pull the wool over someone’s eyes,” said Councillor Kerr. “A citizen contacted me and in good faith I carried out the request. I don’t know why they didn’t reply to the survey, you have to ask the constituent, not me.”

Councillor Mark Glasgow, seconded Councillor Graham’s proposal and said he was concerned that 19 surveys had been sent out without reply.

DUP group leader, Councillor Paul McLean said he was of the belief Sinn Fein are using this as a ‘coat-trailing exercise’.

“It is like what a dog does when it pees – it marks out its territory,” said Councillor McLean.

“The language signs are being used to mark out that this is a nationalist/republican council and what we have seen here tonight is another area where they have dropped the ball.

“A bit of skulduggery has been going on behind the scenes. It is quite obvious there is work going on and this whole thing is being promoted and blown out of proportion so I would agree with the Vice Chair on the whole process.”

Council’s Chair, Sinn Fein Councillor Cathal Mallaghan said every councillor is entitled to their opinion and will be heard in Council but called on Councillor McLean to withdraw his comments, likening Sinn Fein members or voters to animals.

“It is unacceptable and does not do your party any favours, like we have seen in the past,” said the Chair.

“In the same week your agriculture minister spoke in a demeaning way to nationalists, I just think this is a continuation of the disrespect that is shown to nationalists right across the north.”

Councillor McLean said: “I made the comparison in the process of what it is. The signs are being used to mark out territory as far as I am concerned.

“I believe, as a Council, we function well together but when it comes to things like this, where it seems there is a lack of respect for each other, then these things happen.

“This is an occasion and process where your party, in my view, does not respect the unionist section within the community.”

Independent Councillor Barry Monteith said there is a section of the community who, “abhor Irish culture, who hate the Irish language and are motivated by that”.

“The reality is this has been a very successful service, one that is very popular and I see no difficulty with councillors promoting it, the same way we would encourage businesses and community groups to apply for grants,” said Councillor Monteith.

SDLP group leader, Councillor Malachy Quinn said he was in a state of “despair” that this issue was being discussed again.

“What has actually happened here is a unionist councillor got a bit of press out of condemning these signs a couple of weeks ago and now everybody is piling on seeing a chance to get a few column inches,” said Councillor Quinn.

“The Irish language is not a threat to anybody and never has been. It is not about marking territory as Councillor McLean has put it, it is about pride in the Irish language and the desire to see more of it in the community.

“To keep raising this issue again and again is pretty sad to be honest.”

DUP Councillor Clement Cuthbertson said he was of the understanding the policy has never been reviewed and claimed it was the use of incorrect Irish on the street signs that required review.

“It was reviewed three times and the signs were changed three times, at a cost,” said Councillor Cuthbertson.

“Councillors are advertising these as free, but they have to be paid for by the rate payers and I would agree with the view that this is about marking out territory.

“There is no budget for this, the cost of this is split between two different departments and we have never had an accurate costing for the signs yet.”

Ulster Unionist group leader, Councillor Walter Cuddy said he was the councillor, Councillor Quinn had been referring to.

“Are there councillors in this chamber who actually think that some time in the future we will all be speaking Irish all of the time? All I am saying is it is all about equality and balance.

“We are back to this every time because the agreement we have had isn’t right. It is not bringing us all forward together we have to get a balance.

“Can we not go back and try and get an agreement, that is what we are about here.

“I hope we all can see sense but at the minute Sinn Fein and the SDLP just plough on through and say ‘look no chance, this is the way we are doing it and we will just keep marking our territory’.

“It is unfortunate to say that but it is true.”

Councillor McLean then said he was not grandstanding, telling the chamber he is “too old to be at that carry on”. He also said he wanted to be on record that he is against signage being vandalised.

“I have always gone down the democratic process, I have a right to raise issues and I will continue to do it,” said Councillor McLean. “I do not agree with vandalism and I believe it should be condemned.”

Bringing the debate to a close, Councillor Graham said remarks claiming she was motivated by hate were “completely uncalled for” and asked for them to be withdrawn immediately.

Councillor Monteith responded to this comment telling the chamber “that is a blatant misrepresentation of what I said”.

“I did not say any councillor was motivated by hate,” said Councillor Monteith.