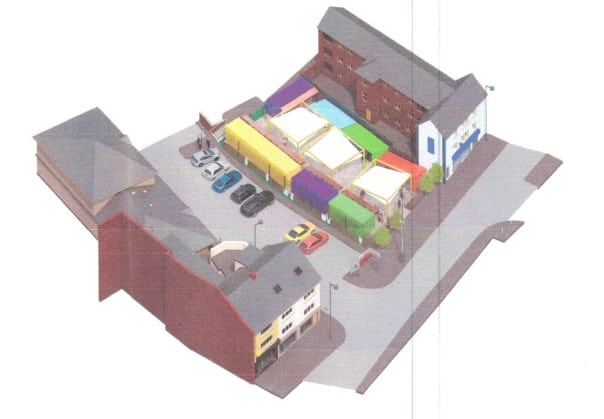 Dungannon’s Market Square is set to undergo a revamp with the installation the temporary installation of modified shipping containers.

Lodged by agent Barry Maguire Chartered Architect on behalf of Dungannon Enterprise Centre, the application sought permission to temporarily erect (for three years) modified shipping containers and lightweight structures at a site south west of and immediately adjacent to no 27 Market Square, Dungannon.

Acknowledging that as the land in question belongs to the council, all councillors had to declare an interest, a proposal to approve the application was put forward by Councillor Derek McKinney and seconded by the local authorities Chair, Councillor Cora Corry.

A report presented to councillors ahead of the committee noted there were no issues raised by council’s planning officers during their assessment of the application.

The site, located immediately adjacent to 27 Market Square is vacant however it has previously been used as offices dating back to the 1970s. It is currently bounded by wooden fencing and a number of mixed uses surround it including, residential, commercial and recreational uses with a car park located to the north west and south west of the site.

According to the application form, the intended use of this premises will be to create market space and, with the proposal having access from both Market Square and Feenys Lane car park, officers are of the view this is an appropriate use of the area as it could lead to rejuvenation of the site.

It was also noted the positioning of the containers is to be within the existing footprint of a former building which has been demolished many years ago and the foundations of this building would be much deeper than the 2ft dig proposed.

DfI Roads were not consulted on the proposal as the agent has not noted there will be any vehicles visiting the site, planning officers have recognised there may be a need for vehicles to visit the site on occasion but are content there is ample parking surrounding the site to allow for this. An artists impression of what the proposed project, adjacent to 27 Market Square will look like