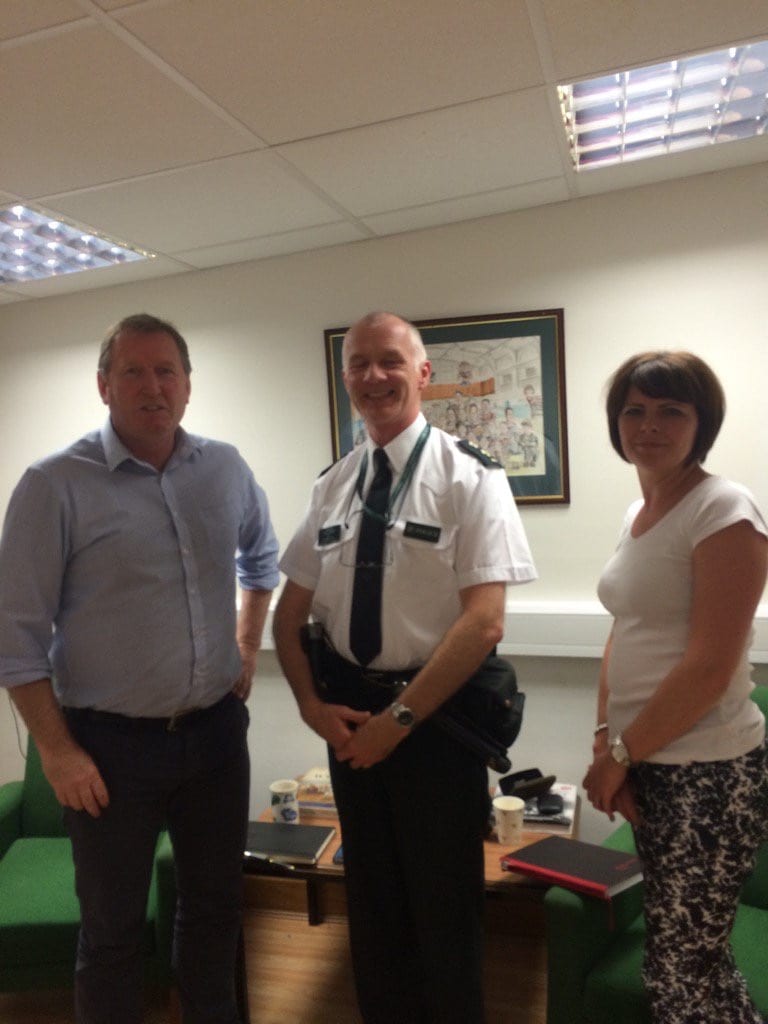 An Upper Bann MLA has expressed his concerns over the lack of funding to deliver on local policing plan priorities.

But he has been impressed by the commitment and attitude of police towards achieving this goal.

These included three major issues – drugs, young people taking and distributing explicit images, and blackmail, where locals have first been conned into sending compromising pictures via Facebook by criminal gangs.

Captain Beattie said he was “extremely impressed” by the inspector’s ommitment and focus towards ridding the town of anti-social behaviour and removing drugs from the streets.

He said: “During our discussions the inspector stressed three points that he would like the community to be aware of.

“The first was the major issue in the area around illegal drugs and indeed legal prescription drugs. Although the PSNI in the area continue to conduct disruptive searches for those dealing in drugs, there continues to be a major problem; this problem is exacerbated by the selling of prescription drugs such as Lyrica also known as Pregabalin.”

The MLA said the inspector also highlighted the issue of young people taking explicit ‘selfies’ of themselves then either distributing it through social media or retaining it on their phones.

Captain Beattie continued: “He explained that distributing explicit images of themselves is an offence, and may well result in the phone being seized or further legal proceedings.

“If as an adult you receive explicit photos of anyone below the adult age then it can also be deemed as an offence. His advice was that if you are under the age of 18, refrain from taking explicit images of yourself and, if you receive any, delete them immediately.”

This type of activity, said the Ulster Unionist, was not only something which young people had been worryingly participating in.

He continued: “Inspector Badger then went on to explain an ongoing trend in the local area. That is for overseas gangs posing as young ladies, targeting older middle aged men, in an attempt to get them to send compromising photos of themselves on Facebook. They would then use the photos to demand money from the individual.

“His advice was firstly not to send compromising photos but if you get caught out get in touch with Facebook immediately and, if you feel necessary, the PSNI.”

Captain Beattie said he was heartened by the meeting at his office, although funding was an issue.

He added: “The only cautionary note that I took from my meeting with Inspector Badger was the levels of resources he has for Neighbourhood Policing in the Portadown, Lurgan and Banbridge area.

“This includes himself and just two teams of six officers, with no resilience or support for any officer who would be off on long term sick due to illness, injury or stress.

“Given the new Executive Action Plan to tackle paramilitary activity and organised crime, which has been highlighted this week, promotes an increase in community policing, without extra funding or resourcing it is clear that Neighbourhood Policing will not be able to match the aspirations set out in the Action Plan.

“As a whole I am impressed by the policing plans and methodology set out by Inspector Badger, but I am in no doubt that the PSNI in the area have many challenges ahead and the Neighbourhood Policing team are at the forefront of promoting a better and safer community.”

Hero’s return: BBQ to welcome back Stevey after 60 ultra-marathons for autism

‘Help us find them’: Family appeal on driver who left young dad in intensive care

It could be yours: Would you like to own a house in Gosford Castle?