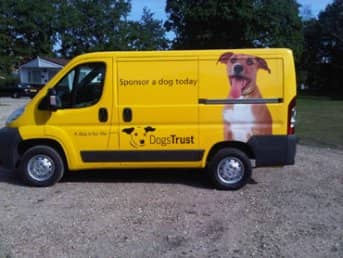 Charity workers offering a free dog microchipping service to the people of Armagh were left in a state of distress when they were targeted by teenage stone-throwers and subjected to “vile abuse” this afternoon, Monday.

Lord Mayor of Armagh, Cathy Rafferty, tonight expressed her disappointment at the news of the attack on a Dogs Trust vehicle and staff in the Mullacreevie Park area.

Condemning the incident, the Lord Mayor said: “The Dog Control Section of our Council had asked the Dogs Trust charity to help carry out free microchipping clinics in the Armagh City and District area, and they were on their sixth day of doing so without any issues.”

But she added: “The Dogs Trust vehicle and staff came under attack by a a group of five youths, around the age range of 14-17 years old, in the estate.

“This incident caused them to move from the location at the shop to the entrance of the Killylea Road to carry out the chipping clinic, but the group of youths followed them and continued to throw stones and other items at them and their vehicle.

“This left them no option but to leave the area.”

“The Dogs Trust and our Dog Control Service were in the area to help dog owners within the community,” she stated.

“What happened to them today was a disgrace and totally uncalled for. I am aware the whole deplorable incident caused much distress to those who were subject to this vile abuse.

“I extend the best wishes of all to them and hope this incident will not deter them from their great work.”

Councillor Rafferty confirmed that the PSNI had been informed of the incident.