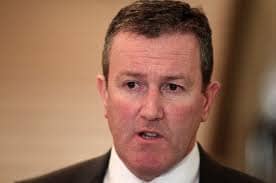 NEWRY and Armagh MP Conor Murphy has received a death threat to his constituency office.

The Sinn Fein representative said a call was made to the Newry office, claiming to be from the UVF, threatening that he would be shot at his home.

He said that the PSNI have been made aware of the phone call, which was received yesterday (Tuesday) afternoon.

“Considering the antics of the UVF in Belfast of several months now we took the threat seriously,” he said. “Whether it is the UVF or anyone else making such threats, they need to realise that Sinn Féin will not be intimidated from carrying on working for our constituents.”

A PSNI spokesman said they could not comment on an individual’s security.