Deano ‘Wooden’ Give Up! 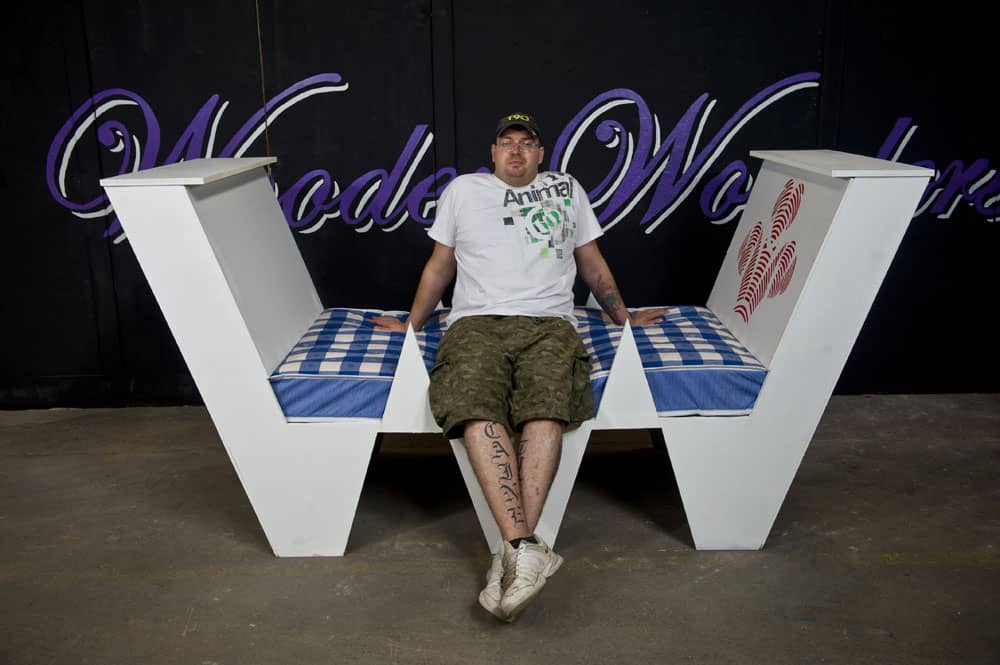 AN Armagh man is inspiring others to look to the future and is living proof that willpower and determination can triumph over adversity.

Thirty-year-old Deano Bevan was left wheelchair-bound after a work-related accident which then saw him spiral to the depths of depression. But this remarkable man is not one to admit defeat. Rather, in true ‘carpe diem’ style, he seized the day and bounced back in amazing fashion, not only learning to walk again, but going on to set up his own business.

Deano trained and worked as a carpenter until, aged 24, an accident left him unable to do so. Losing the job he loved sent him into a deep depression and, for nearly seven years, he struggled with his health problems and unemployment. Yet when he realised he could start his own business with the help of the Enterprise programme, it proved to be a turning point in his life. Growing up, Deano found his niche and life was going well for him.

He said, “I was incredibly lucky. I finished school, studied carpentry at college and started work straight away, doing a job I genuinely enjoyed.”

But in 2005, Deano fell from a roof while at work and broke both his hips. As a child he’d had health problems after being born with crumbling hips. This accident proved too much for his body to cope with and Deano spent 18 months in a wheelchair.

“There were times I thought I’d never walk again. I went from working 12 hours a day to being stuck in a bed or a chair, it was a very dark time and, looking back, I can see I gave up hope,” he said.

With determination, Deano learned to walk again, but his hips never fully healed due to his underlying condition.Because he remained in constant pain, unable to stand for long periods or carry heavy loads, he couldn’t return to full time work as a carpenter. He started taking medication to deal with his feelings of depression and began to look at other options.

He said, “I took a couple of courses and tried to learn about computers but, because I’m dyslexic, it just didn’t work out and didn’t lead to any jobs. The longer I stayed on disability benefit, the lower I felt.”

In the end Deano realised he wanted to find a way back into carpentry and, in 2010, he started to plan a business using his skills to make themed children’s furniture.

The plucky craftsman was inspired to come to The Prince’s Trust after seeing their logo on Blackburn FC’s jerseys and, after taking part in the Enterprise programme, was allocated a business mentor and a loan of £4000. This helped him to both secure premises and further investment to get Wooden Wonders off the ground in March 2012.

Said Deano: “Setting up my own business means my life can finally move forward. Now I split my time between building furniture and sitting down to do designing and paperwork, which means I can manage my health issues. We’ve already secured so many orders that I’m also able to employ another joiner and a spray painter on a part-time basis.”

Deano is now in the process of coming off benefits and has managed to overcome his depression so well that he’s also stopped needing his medication.

He added: “If I hadn’t found The Prince’s Trust I’d still be stuck at home looking at a half completed business plan. Instead I’m doing something I love and providing for my family. It feels great.”