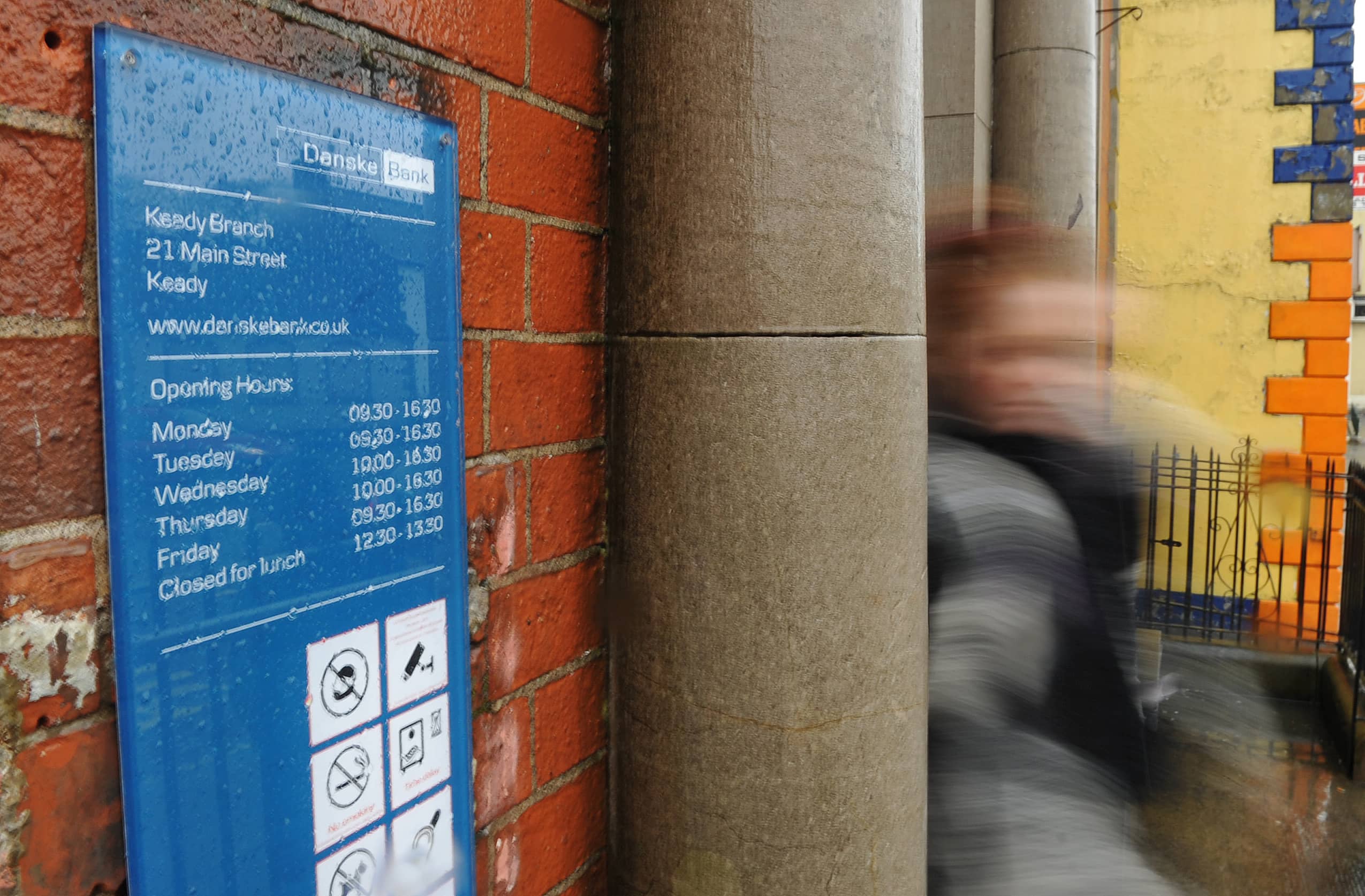 DANSKE Bank are to close two County Armagh branches in June, it has been confirmed. Danske Bank are to close two County Armagh branches, it has been confirmed. The Keady and Markethill branches of the bank, formerly known as Northern Bank, will close in June. Pic: Conor Greenan

The Keady and Markethill branches of the bank, formerly known as Northern Bank, will close in June.

Customers are being advised to use the banking facilities in Danske Bank’s Armagh and Portadown branches but will still be able to deposit and withdraw money using the Post Office.

The Ulster Unionist Party’s Newry & Armagh MLA Danny Kennedy has expressed his disappointment at the news and fears it could be damaging to the area.

“The closure of the Northern Bank’s Markethill sub-office would have a very profound and serious impact on the town and the local business community,” he said.

“It will have a detrimental effect on local services, not to mention the staff employed in the branch and I will seek to raise these concerns directly with the Northern Bank.”

“The Keady branch is located in an iconic and historic building in the centre of the town.  What’s more, in reaching their decision the Danske Bank has confirmed they are also closing their ATM service in the town as well,” he said.

“The SDLP will be meeting with Management within the bank to see if this decision can be reversed.  There is a real and genuine anger within these communities about this decsion, not to mention the concern for the staff effected with this move.”

A statement from Danske Bank said that the move is in response to the changing nature of everyday banking.

“Banking as an industry is not alone in responding to the changes in consumer habits. The increasing popularity of the internet in so many other aspects of life, from shopping to socialising, is also changing the face of banking,” it read.

“It is important that we keep pace with the changes in how customers use branches, and respond to those trends which require continued investment in our online services.” Danske Bank are to close two County Armagh branches, it has been confirmed. The Keady and Markethill branches of the bank, formerly known as Northern Bank, will close in June. Pic: Conor Greenan

Mr Boylan said: “The announcement that Danske Bank in Keady will close on the 14thJune is a huge blow to the local community. Thankfully the branch staff will not lose their jobs as they will be relocated, however, it still causes stress to employees as they will have to adapt to a new location and in some cases have to travel further to work.

“It will cause disappointment for customers who availed of the Keady branch as they will have to travel to their nearest branch in Armagh, however, it is not practical for some people to travel the whole way to Armagh as not everyone has access to a car and bus services are limited.

“It is imperative that Armagh City Council with all other relevant bodies try and find a suitable tenant or business to fill the void that will be left in the centre of Keady.”

Local Sinn Féin Councillor Darren McNally added: “Since customers received notification of the closure of the Danske Bank in Keady, I have been inundated with calls from concerned residents as it has been clarified that Danske bank will also remove the bank link, meaning that people wanting to withdraw cash will have to use the other bank link in the town and could face charges on their card.

“It is unacceptable that there was no consultation period to let members of the public voice their opinion around the closure. We will be seeking a meeting with the Corporate Manager from the bank to ensure that existing customers and their transactions can be dealt with efficiently.”