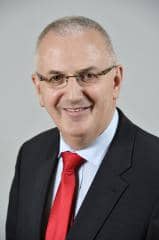 Mr Kennedy was endorsed at a meeting of the Newry & Armagh Constituency Association held in Armagh City on Monday night. Mr Kennedy`s name will now be passed to Party Officers for ratification.

Mr Kennedy said: “It is an honour and a privilege to be selected as the Ulster Unionist Party`s candidate for the constituency of Newry & Armagh, a place where I have lived all my life. I am the only Unionist who can win this seat.

“I am the only non-Sinn Fein candidate who can take this seat and represent all the people of the constituency at Westminster. Everyone knows my record of representation and if elected I will ensure that for the first time since 2005, a voice from Newry & Armagh will be heard in the House of Commons. I`ll be a full-time MP.”

Mr Nesbitt said: “Danny Kennedy has a long record of service and hard work for the people of Newry & Armagh. There is no better man to represent them in Westminster. Danny`s dedication to his constituency is well known and recognised. He is the only realistic alternative to Sinn Fein in the forthcoming Westminster election.”