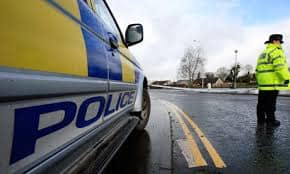 Police are currently at the scene of a security alert in Crossmaglen, following the discovery of a suspicious object close to a major cross-border electricity interconnector.

The object was found in the Dundalk Road area and there is a cordon in place between the Foxfield Road and the border.

Sinn Féin Councillor Terry Hearty spoke tonight (Wednesday) of the disruption which is currently being caused.

He said: “On Tuesday the police contacted me to say that a media outlet had been notified regarding a suspicious device believed to be located somewhere in the vicinity of Crossmaglen.
“On Wednesday it appears that the police obtained more detailed information which led them to locate this device near an electricity pylon on the Dundalk Road, Crossmaglen.
“A number of roads in the South Armagh and North Louth areas have now been closed by the PSNI and the Gardai and a number of residents have been moved out of their homes.
“At this stage the police have been unable to give any indication how long these residents will be prevented from returning home or how long the roads will remain closed.
“This is a major inconvenience for people living in this area, particularly given the fact that the B30 from Crossmaglen to Newry is also currently closed during the day for roadworks.
“I hope that this disturbance does not last long and I urge whoever is responsible for leaving this device to explain their rationale to the public.”

A PSNI spokesperson said police regret the disruption but they were intent on making the area safe for the people of South Armagh.

The road, he added, is expected to remain closed for some considerable time.

ATO remain at the scene.

The suspicious looking device has been left in an area close to the North/South electricity interconnector.

Enterprise Minister Arlene Foster has condemned those behind the alert.

She said: “It is not the first time our infrastructure has been attacked by terrorists. A previous generation wasted precious lives trying to advance a political goal through such tactics. They failed. This further attempt will also fail.

“I have been in touch with the Electricity Systems Operator. The operator has procedures in place to deal with this event and ensure that power to homes in Northern Ireland is not disrupted.

“Given the location of this device, Army Technical Officers will require time to resolve the situation.

“I have no doubt that the majority of our population are opposed to this activity.

“These terrorists can only be put out of business if the community gives information to the police and provide zero cover for anyone involved such hate filled terror.”

A PSNI spokesman added: “Police regret any disruption and will endeavour to make the area safe for the people of South Armagh as quickly as possible but it is anticipated that the alert may continue for some time.”