‘Woman of grace with heart of gold’: Tributes at passing of ‘Disappeared’ widow Kathleen Armstrong 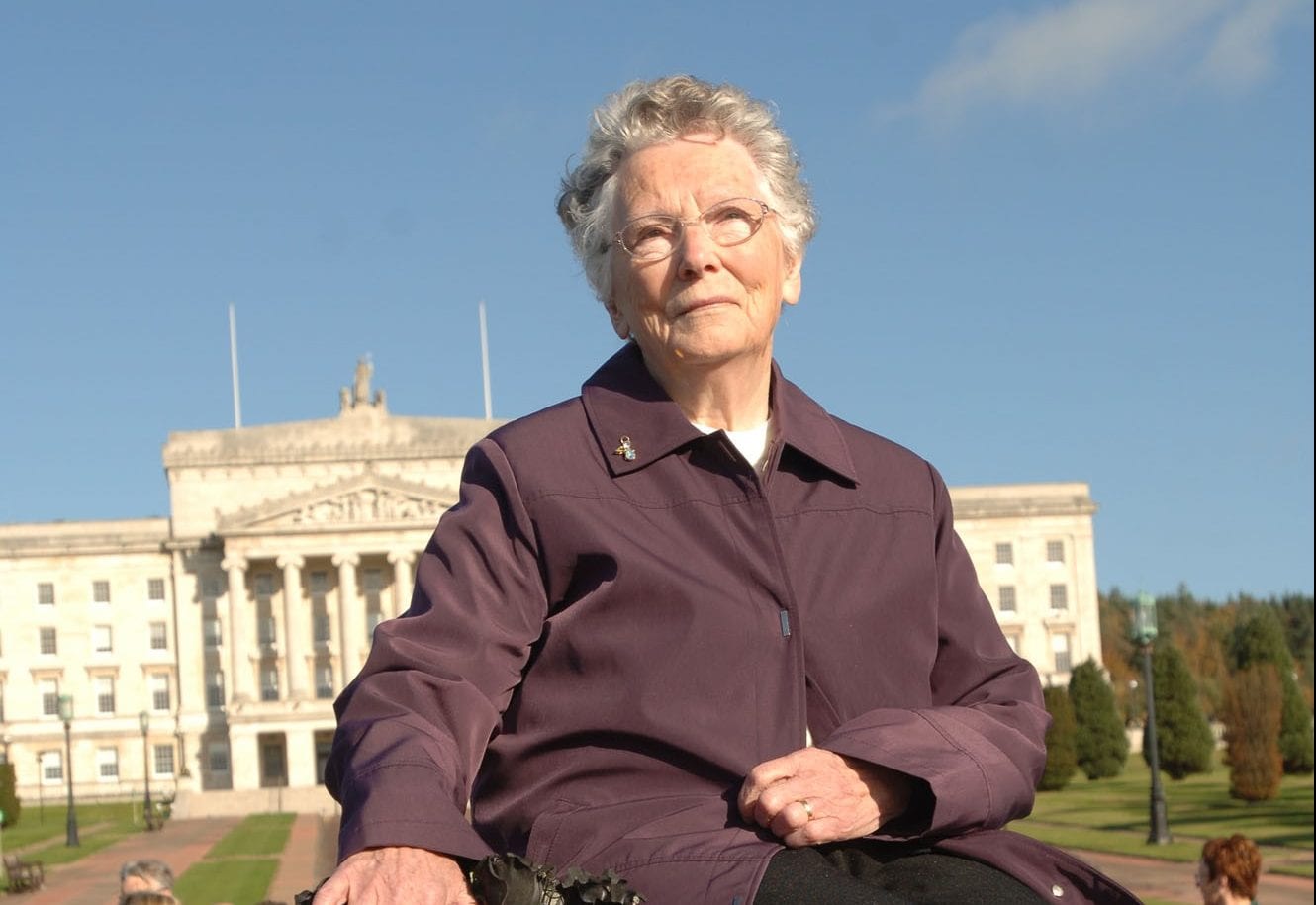 Actor James Nesbitt has led tributes to Kathleen Armstrong, wife of one of the so-called Disappeared, who has passed away at the age of 90.

Kathleen’s husband Charlie disappeared on his way to Mass in Crossmaglen in August 1981 and it was not until July 2010 that his remains were found in a bog at Colgagh, Inniskeen, Co Monaghan, by the Independent Commission for the Location of Victims Remains. (ICLVR).

She died peacefully in the early hours of Friday morning in a nursing home in Crossmaglen.

James Nesbitt, a patron of the WAVE Trauma Centre and long time friend and supporter of the Families of the Disappeared, has said that he was “desperately saddened” to learn of Kathleen’s passing.

He described her as a “quiet but powerful campaigner for the Disappeared”.

The actor added: “I’ve known Kathleen for many years and like all who met her including Presidents and Prime Ministers it was her warmth, kindness and a deep spiritual presence that stayed with you for ever after.

“Despite the almost unimaginable pain and grief of not only losing Charlie but for the best part of 30 years not knowing where he lay, she never let it get in the way of the compassion she felt and showed to others especially those who suffered the same pain and grief.”

Sandra Peake, the CEO of the WAVE Trauma Centre, which has supported the Families of the Disappeared since the 1990s, said: “Kathleen was an exceptional woman of grace with a heart of gold.

“She was a woman of great faith and serenity. She never gave up hoping and praying that Charlie would be brought home. She never accused anyone or expressed bitterness.

“She was the absolute embodiment of fortitude and dignity in the face of an enduring tragedy.

“And there was a no more warm and welcoming place than Kathleen’s home and everyone who crossed the door felt so much better for having been in her company.”

On hearing of Kathleen Armstrong’s death, Geoff Knupfer, the lead investigator of the ICLVR, said it was “very sad news”.

He said: “Kathleen was a lovely woman and so gracious in all her dealings with the ICLVR.

“Everyone involved was so glad that we were able to return Charlie’s remains for the Christian burial that had been denied for so long.

“We all knew what it meant to Kathleen to be able to lay Charlie to rest.”

Kathleen is survived by her daughter Anna McShane, sons Charles, Jim and Terry. Her daughter, also Kathleen (Cumiskey), predeceased her in 2013.

Her funeral will take place on Sunday, December 8, leaving her home at Culloville Road, Crossmaglen, at 11.30am. At the request of the family, the house will be private on the morning of the funeral, which is to St Patrick’s Church, Crossmaglen, arriving for Requiem Mass at 12noon. Burial is afterwards in the adjoining cemetery.

Ms Peake added: “Kathleen is the last of the early campaigning group. Her good friend Mary Evans, mother of Gerry Evans, died in 2017.

“They have gone but the campaign that they waged tirelessly and fearlessly will go on until the last of the Disappeared is brought home.”

Anyone with information relating to the whereabouts of the remains of Joe Lynskey, Columba McVeigh or Robert Nairac should contact CrimeStoppers on 0800 555 111 and the untraceable anonymous online form is at www.crimestoppers-uk.org.