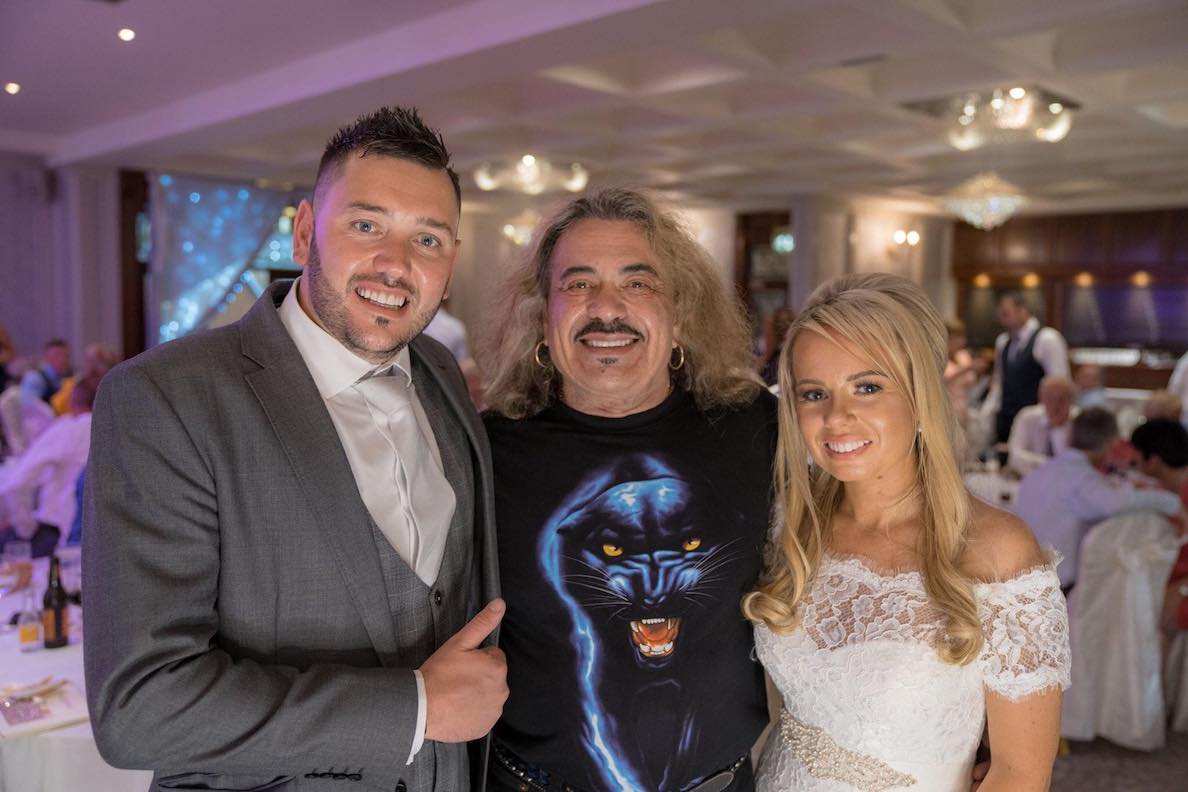 Your wedding day should be one to remember always!

And for the family and friends attending the nuptials of one south Armagh couple it surely will be!

Did we mention that Sean’s an X-Factor fan? No?

Funny that. Rachel didn’t know just how big a fan he was either!

So imagine her surprise when the door to her reception opened and in walked the moustachioed musical maestro that is Wagner!

The long-locked Brazilian balladeer – who shot to fame after his appearance on the ITV talent show ‘The X-Factor’ in 2010 – shared the stage at the Carrickdale Hotel in Dundalk for a fantastic night never to be forotten.

And in the build-up to their wedding and throughout the big day itself, Sean kept the closely guarded secret, shared only with his two bestmen Micheal Short and Michael Cassidy, as well as groomsmen, David Donadson and Martin Aherne, all Cross lads and up for the craic!

Then came the moment of truth and in walked Wager!

And the reaction was incredible.

Sean knew he had done the right thing and his bride’s reaction said it all.

He told Armagh I it was an unreal addition to the best day of their lives.

“Rachel couldn’t believe it and thought it was hilarious – luckily!

“I booked Wagner because I always loved him on the X-Factor for the laughs and knew he would get the crowd going, which he definitely did,” reflects Sean.

“He was booked as a surprise guest and he flew in just for the wedding. He definitely got the crowd going and was great craic!”

Wagner joined the newlyweds’ reception band on stage and sang hits including Elvis Presley’s Suspicious Minds, proving to be a King of entertainment and comedy himself and a legend in his own right!

“All the guests loved it too as he also did a meet and greet,” adds Sean. “He sang with our band the Stormers, from Dundalk, and they loved it too.”

Wagner even stayed the night in the Carrickdale Hotel and the grateful groom left him to the airport the next morning.

“He was brilliant craic on the way back to the airport,” says Sean, who insists booking the star was truly inspired!

“It’s definitely not a day we will forget in a hurry, he definitely stole the show!

“It was his first Irish wedding and after this performance it won’t be his last!”

Wagner is available for bookings via his Facebook page or email him at happiness.entertainments@gmail.com