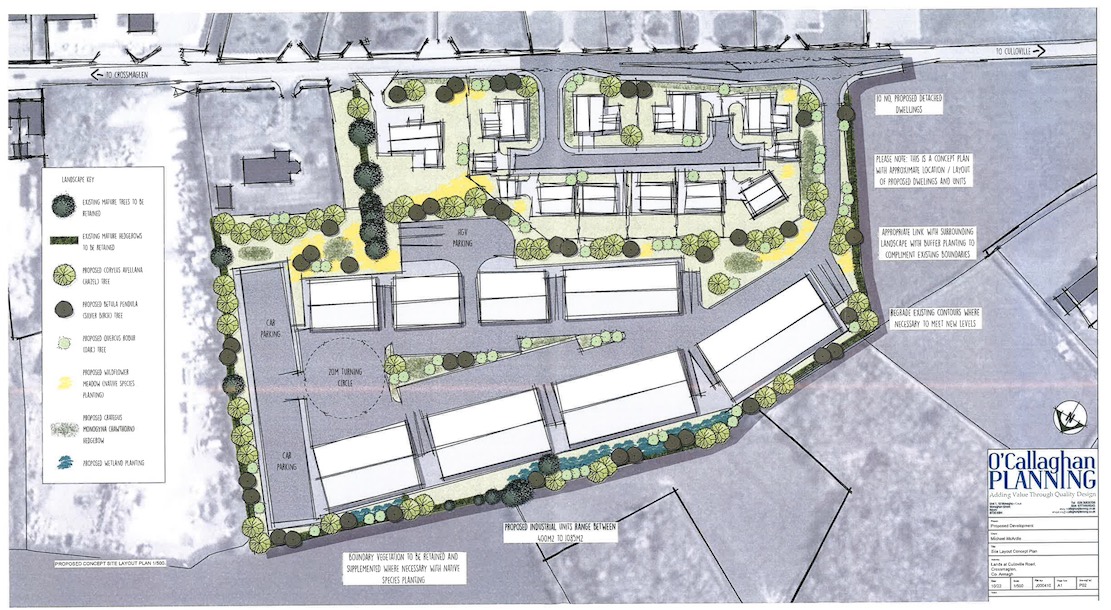 A huge multi-million pound mixed-use development in Crossmaglen – offering business and industrial units and office accommodation – has the potential to create up to 230 new jobs.

But councillors have been informed they must agree to change a requirement in the local development plan relating to housing or the opportunity will be lost entirely.

Confirmation of the possibility of a major employment lift for the south Armagh area came with the submission this week of an application seeking outline approval.

It comes after a pre-application event was held in Crossmaglen Rangers GFC clubrooms in June.

Proposals – in the name of Mr and Mrs McArdle – have now been formally drawn up and submitted to Newry, Mourne and Down District Council for consideration.

The pre-application event was necessary given the plans – for “lands adjacent to 59 Culloville Road, Crossmaglen” – fall within the major category of development.

The applicants are hoping to construct a major mixed-use scheme – which would boast floorspace of close to 63,000 sq ft – on what is currently described as “agricultural” lands.

It would consist of various individual units supporting economic development, to include business and office units, as well as light and general industrial units and storage facilities too.

The proposals also include a small residential development consisting of up to new houses.

The application also includes over 100 parking spaces, as well as landscaping and other associated site works.

A supporting statement indicates that the addition of housing may be contrary to a ‘key site requirement’ of the council’s local development plan but is necessary to support the overall project.

And it points too to the huge benefits – both in terms of investment and jobs which would be created – as a result of the overall project, situated on land for which there is an “absence of a defined need for any other form of development”.

The statement says the scheme has the “potential to deliver anywhere between 125 and 230 jobs”.

It points out too: “Either way, the potential for employment and investment is significant for Crossmaglen and this potential is too much to risk by refusing this application because it includes a small amount of housing, when mixed-use sites generally include housing anyway.

“The scheme is financially not viable without the housing – the release of a small amount of housing land will facilitate the economic development and thus can be considered a form of enabling development.”

It continues: “Department from a policy or plan is legitimate where circumstances warrant and, in this case, were the council to cherish the key site requirement and continue to resist even a small amount of (complementary) housing, the site will continue to be stymied and the potential for economic growth in Crossmaglen will be lost.”

The outline submission will now be advertised shortly. If successful, more details on actual layouts and unit numbers would follow in a reserved matters application.