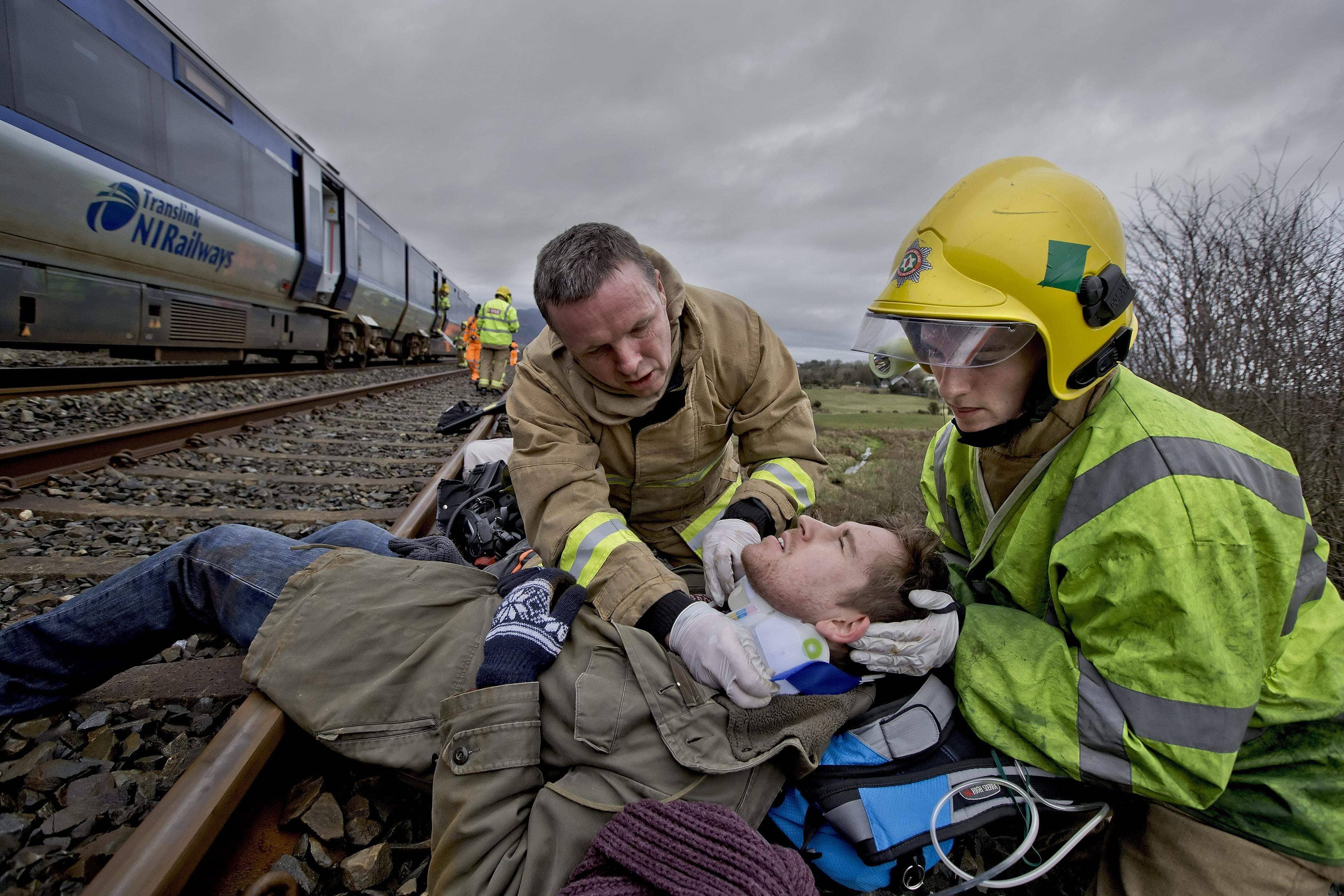 A car crashed through a fence onto a railway track and into the path of an oncoming train. The car was pushed along the track by the train and fell off at a bridge colliding with other cars.

This all happened in Jonesborough, county Armagh at the weekend but thankfully this was a emergency training exercise for Northern Ireland Fire & Rescue Service (NIFRS), in partnership with Translink and Louth County Council Fire and Rescue Service.

The purpose of the exercise was to test operational command and response from the responding agencies, on each side of the border, to an extensive railway and multiple road traffic collision incident in the border area.

The exercise, called “Jonesborough Juggernaut”, took place on Sunday and involved a staged collision on the railway tracks.  As part of the scenario a car crashed through a fence onto the railway track and into the path of an oncoming train.  The car was pushed along the track by the train and fell off at a bridge colliding with other cars.  Simulated fires on board the train combined with diesel leaking into a stream further intensified the difficulty for the various agencies responding to the mock up major incident as they dealt with multiple fatalities and dozens of casualties.

Chris Kerr, Chief Fire Officer, Northern Ireland Fire & Rescue Service (NIFRS) said: “Exercise ‘Jonesborough Juggernaut’ was one of largest railway training exercises we have ever held.  It allowed us to test response, command, communications, tactics and interoperability between NIFRS, Louth County Council Fire and Rescue Service and Translink, as well as with our colleagues across the statutory and voluntary sectors.

“Major Emergency incidents on the railways, are thankfully quite rare, but can have serious consequences with generally large numbers of casualties if not fatalities involved. Preparing and training together for such incidents is essential and builds upon the ongoing co-operation and training between NIFRS and Louth County Council Fire and Rescue Service for responding to incidents in the border areas as well as reinforcing collaboration with Translink in dealing with an incident of this scale on the railways.

“This exercise was extremely valuable and there are learning points for all of the agencies involved. This will ultimately enhance interagency working between the emergency responders, both north and south, and is a vital lifeline to members of the public who may find themselves in an emergency situation on the roads or on the railways, not only in the border areas but across Northern Ireland.”

Granville Lavin, Group Health and Safety Manager, Translink said: “This exercise has given Translink NI Railways a very valuable opportunity to work with our colleagues in the emergency services.  It has also enabled us to test and review our own preparedness and processes for responding to major incidents.”

Eamon Woulfe, Chief Fire Officer, Louth County Council Fire and Rescue Service, said: “This major emergency exercise has allowed Louth County Council Fire and Rescue Service to test its response to a major rail incident, which is identified as a potential major emergency scenario in the county.  It also allowed us to test our joint response to incidents with NIFRS and builds on the experience of previous cross border exercises carried out as part of the Memorandum of Understanding for joint attendance at roads-based incidents.

“A rail-based emergency is a particularly difficult event for emergency services to deal with and this has been a valuable learning experience for Louth Fire Service Personnel. I would like to thank NIFRS for all of their work on this exercise and Translink for making a train and live rail line available for the exercise and also the local residents.”