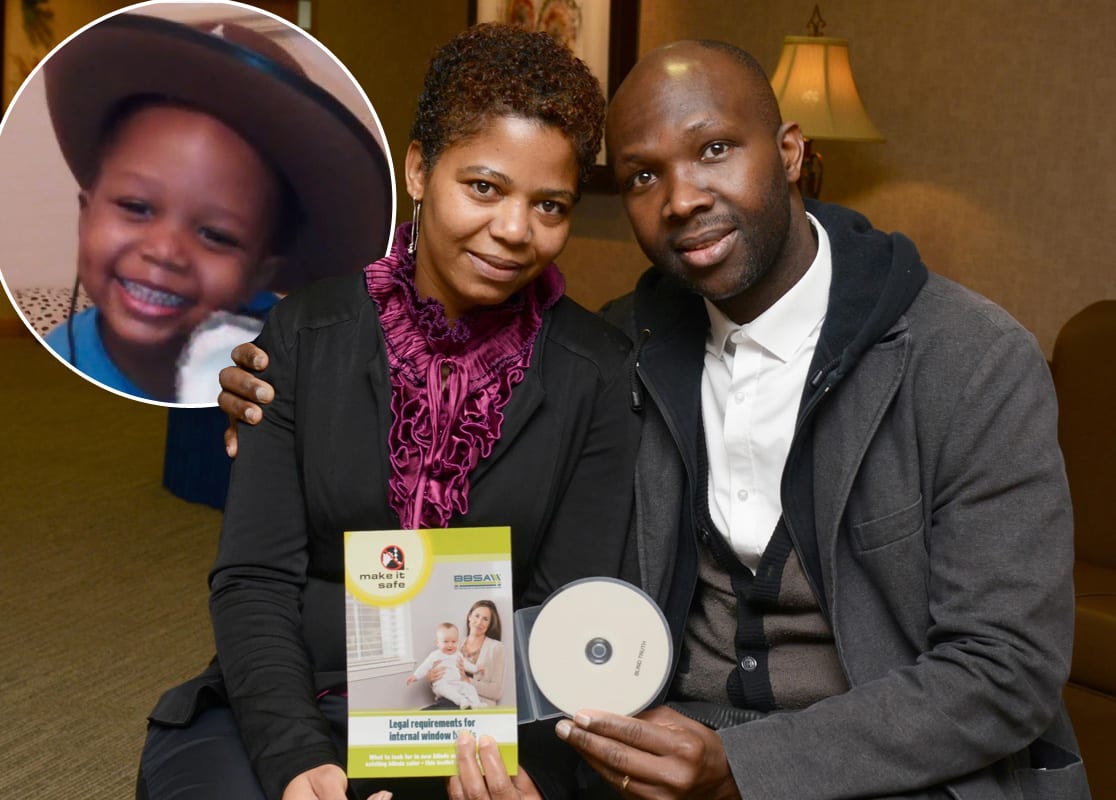 A County Armagh couple – whose two-year-old son died in a tragic accident involving a blind cord – have bravely spoken out to warn other parents of the dangers.

Now they have recorded a seven minute video entitled ‘Blind Truth’, to raise awareness of the “silent killer” in our homes.

They have also taken part in a free workshop in Craigavon Civic Centre, organised by the Southern Health Trust, which focused on the dangers posed to babies and young children by the looped cords.

The workshop was organised by the Promoting Wellbeing Team and delivered by the Royal Society for the Prevention of Accidents.

Maria and Feliciano have known each other since they were 15, and moved to Portadown from Italy; she had three children from a previous relationship and he too.

Together they had two more children, one of them little Brian, who would have turned three on Sunday past.

But on September 25, tragedy visited the family home.

Feliciano had left the house to go to work, having taken his other young daughter to school.

Brian remained at home with Feliciano’s other children, all adults.

He recalls: “Brian was in the living room and one of our daughters went into the kitchen. He was left to drink his milk and play. For us the living room was the safest room in the house. We never thought the living room would be a death trap because it had practically nothing in it. It only had a television, a sofa, a small table. That was all.”

Maria also believed the living room to be safe.

She said: “I was afraid of the stairs, the bathroom and other things like the oven that Brian could touch. But the place we thought the safest was where my son died. Just a few seconds distance from his sister. His sister had just gone to the kitchen to wash the plates that they had used to feed Brian. She had just left him for moments.

“There was silence. She heard nothing. She didn’t hear him speaking or moving and came back to the living room to check on him and found her brother hanging in the blind cords.”

The grieving mum wants others never to leave their child in a room with these blind cords. Together she and Feliciano hope to see them being done away with altogether.

Maria continued: “Blind cords have little balls that attract the attention of toddlers. We need to have at least some form of safety device in the cord. We need to make them secure. We don’t want to see another child like Brian die. It’s enough.

“We didn’t know the dangers of blind cords. Because of this we are here now because there are many people who still don’t know how dangerous blind cords can be.

“We are trying to speak to people and inform people of how dangerous these cords can be.

“They are like silent killers we have in our homes. Sometimes people say ‘but I have no children at home’, but we have nieces and nephews, grandchildren, that visit our homes.

“We need to put safety devices on our windows.

“Give safety to our families, to our friends, to the people that we love. Our desire is that one day we will see Ireland without these cords.”

Data from the Royal Society for the Prevention of Accidents indicates that 31 children have died as a result of blind cord accidents in the UK between 1999-2015. The children were aged between 15 months and 36 months.

Forty people attended the workshop in Craigavon, which was targeted at those who have contact with families and young children including Southern Trust staff and community and voluntary groups.

The circumstances surrounding these types of accidents and the age range of the children affected were highlighted along with information on the products and behaviour changes that can reduce the risk of these blind cord accidents. Maria Jose and Feliciano Saba with their son Brian (inset)

She said: “Many people still remain unaware of the danger that looped cords present to babies and young children. If a child’s neck gets entangled in a cord even for a few seconds they can be left permanently brain damaged or die. It really does happen that quickly, without warning and with the child often not able to cry out for help.

“Feliciano and Maria’s experience is proof that this is the case as they were not aware of the risks posed by looped cords in their home. Their courage and determination to warn others of this danger is greatly admired and appreciated by the Trust who recognise the family’s wish that this video will be a lasting legacy to their son and form part of the Trust’s ongoing efforts to address blind cord accidents.

“Parents, child-minders and grandparents with young children need to consider any unrestrained blind cords in their home as a hidden and lethal hazard and take immediate steps to keep them tied up and out of the reach of young children or permanently fixed to the wall.

“By making small changes to the home using cleat hooks, blind cord enclosures, tensioning devices and not placing furniture including chairs, tables, cots, beds, highchairs, playpens under windows, many of these accidents can be prevented.

“If buying new blinds for the home, families are advised to look for designs that don’t have cords or chains, particularly if the blinds are for a child’s bedroom. If this is not possible, customers should make contact with a local blind fitter to install cleats or blind cord enclosures to make existing or newly installed products as safe as possible.”

For more information about the dangers of looped blind cords visit: www.rospa.com/blindcords/ . A FAQ section is also provided www.rospa.com/faqs/default.aspx

To download a free copy of the Make it Safe leaflet (produced in partnership with the BBSA) visit www.makeitsafe.org.uk/

A video on making blinds safer is available from the BBSA http://www.bbsa.org.uk/domestic/child-safety/26

Members of the public can also search for a ‘make it safe member’ or ‘make it safe dealer’ by visiting http://bbsa.org.uk/domestic/search-members/