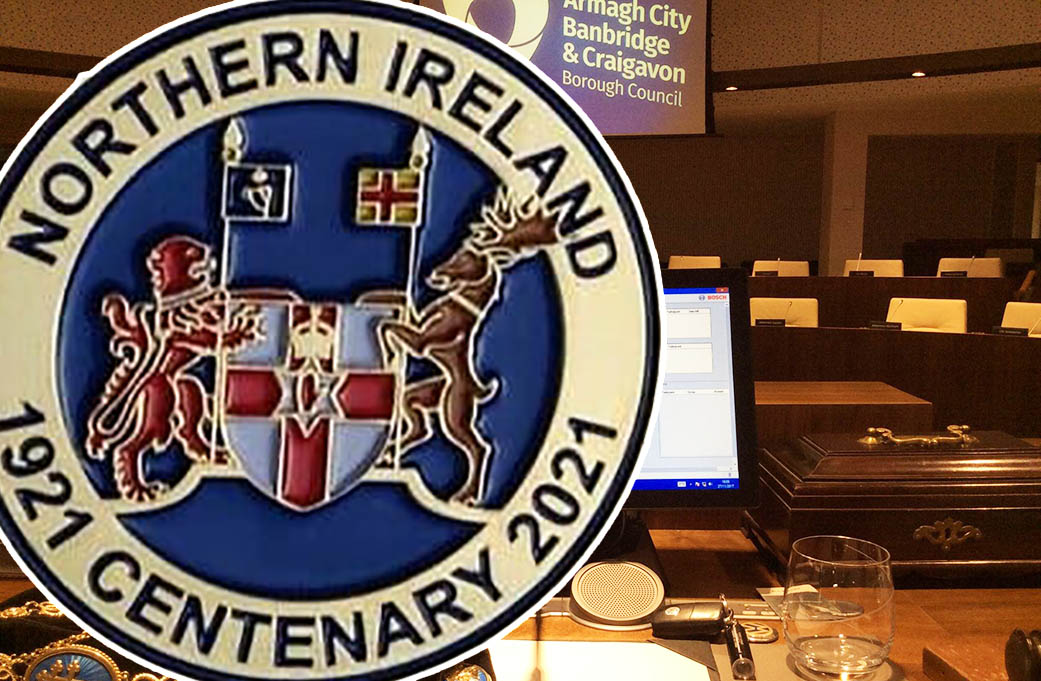 The issue of how Armagh City, Banbridge and Craigavon Borough Council would celebrate the centenary of Northern Ireland saw tempers flare once again.

The contentious subject was raised at a meeting of Council’s economic development and regeneration committee.

It had previously been discussed in November’s committee meeting where some members of the committee were not satisfied with what was presented.

At the time, DUP Alderman Stephen Moutray told officers they should be “embarrassed” by the contents of the report and a proposal from Councillor Mark Baxter, seconded by Alderman Ian Burns saw officers redraw their plans.

The new plans were presented to members at December’s committee meeting. Two options, each with an allocated budget of £120,000 were put to members.

Rather than invite debate on topic, Committee Chair, Councillor Brian Pope said Council should mark the occasion but noted his worry about the expenditure.

“External funding could reduce the expenditure and I would prefer the option that does more to support the events and funding around the borough,” said Councillor Pope.

“On that basis I would propose option 2.”

“We have talked at length in the working group about this,” said Councillor Baxter.

“The budget agreed was £120,000 and any external funding, which would be very welcome, would be in addition to the Council contribution.”

His proposal was seconded by UUP Alderman Ian Burns.

Sinn Fein group leader Councillor Liam Mackle explained his party could not support spending such a sum “on a one-sided jamboree”.

“Unfortunately, the current proposals are not something we can support,” said Councillor Mackle.

“At a time of unprecedented financial pressure on this council and in the middle of a global pandemic the idea of spending £120,000 of our rate payers’ money on a one-sided jamboree is not something we can sign up to.

“We spent 10 months in a working group with members and officers trying to come up with a way to mark 100 years of the existence of Northern Ireland that all of our citizens could buy into and that would have portrayed this borough in the best possible light.

“Unfortunately, at the very end of that process, the unionist members from both parties chose to double the expenditure and push for one sided celebratory events, dismissing the equality commission the community relations council and their own terms of reference.

“The majority of our rate payers do not want £120,000 of their hard earned money spent in this way, particularly at a time when we may have to significantly increase their rates.”

Councillor Mackle continued: “History will show the past century as a dark chapter in the history of the people of this island.

“People from my community struggle to see what is worth celebrating. Partition has been, and continues to be, a disaster for all the people of this island.

“Rather than look back, we will look forward, confident in the potential and prosperity of a united Ireland.”

SDLP Councillor Joe Nelson said he would be happy to second a proposal if Councillor Mackle was making one in order to reduce Council spend to £60,000.

“I think the programme of events takes a very one sided view, with something likely thrown in the other direction to try and appease what we set out to do,” said Councillor Nelson.

“If Councillor Mackle is making the proposal I am happy to second it.”

Councillor Mackle then confirmed he was not making a proposal and reiterated that his party could not support the options available.

Independent Unionist, Councillor Paul Berry said he was delighted to support Councillor Baxter’s proposal, describing the centenary as a “tremendous opportunity to promote the borough”.

“What is wrong with what has been proposed,” asked Councillor Berry. “I fail to see what the problem is, except bigotry and sectarianism.

“One of Councillor Mackle’s first comments during the working group was that we had nothing to celebrate and I believe he wanted to make sure we didn’t.

“It is clear, like his party colleagues in Derry City and Strabane and Mid Ulster, that he wanted no celebrations to take place.

“Councillor Nelson should also remember that his SDLP colleagues would not give their unionist colleagues a crumb from the loaf in those areas either.

“The occasions needs to be embraced for what it is – a tremendous way to promote the borough.”

Councillor Berry continued: “It is not one sided and I believe the majority of people in ABC will reflect that view and will be happy to support these celebrations.

“So let’s go forward and have a tremendous year promoting ABC using the wonderful centenary of this fantastic country that we belong to.”

DUP Alderman Stephen Moutray expressed his dissatisfaction with the Chair’s attempts to “railroad” the committee into supporting option 2.

“I was most surprised and disappointed at the way you tried to railroad us right from the start,” said Alderman Moutray.

“It is a pity you have not been that enthusiastic in times past when I have raised issues about Council expenditure.

“I highlighted issues nearly a year ago and I am not aware of any changes.

“This is a maximum spend of £120,000 and the majority of people will be glad to come out and celebrate the occasion.

“I am very happy to support the proposal made by Councillor Baxter and seconded by Alderman Burns.”

Councillor Joe Nelson said he had comments to make about the “statelet mistakenly referred to as a country from time to time”.

“This statelet, mistakenly referred to as a country from time to time has a GDP smaller than Marks and Spencer and is smaller geographically than Yorkshire,” said Councillor Joe Nelson.

“The people do not realise the benefits that a united Ireland will bring.

“I myself am not a bigot, I am a proud republican, I don’t know what the difference is between nationalist and republican because from my point of view they are the same thing.

“I will respect people’s point of view but I will not be shouted down on my own.”

Councillor Joe Nelson said it was his view that partition was “the worst thing to happen to this island since the famine” and pointed to a DUP proposal to name the South Lake Leisure Centre the Centenary Leisure Centre.

“The proposal to give the leisure centre a sectarian label says it all to me,” said Councillor Nelson.

“I remember back to the days we could not get a swing on a Sunday because the swings were locked up.

“We are not going back to those days. I am a democrat and will not be railroaded into anything.”

Councillor Baxter’s proposal to adopt suggested programme 1 and that any external funding raised would be spent on top of, not in place of, the agreed council funding was put to a vote.

All DUP and UUP members of the committee voted in favour of the proposal with all SDLP and Sinn Fein councillors voting against .

As a result, Councillor Baxter’s proposal passed with 11 votes in favour, eight against and one abstention recorded.

Speaking after the meeting, Independent Councillor Paul Berry said he hoped the celebrations would promote the best the borough has to offer.

“I truly hope this will highlight our businesses, community, food heart land products, education for our schools, Armagh County Museum Exhibitions , 100 places to visit in the ABC area and a fitting civic event and indeed much more throughout the year,” said Councillor Berry.

“I am confident this will be a positive year ahead. The fact remains, we are part of the UK, whether SF, SDLP and Alliance like that or not.

“It was vital we marked this very important occasion and at the same time use it to promote our area in a really positive light for many years ahead.

“This will be ratified at Council at the end of the month then more details will follow soon on our plans for the year ahead.”

Councillor Mackle, also speaking after the meeting, added: “At a time of unprecedented financial difficulty for Council in the middle of a global pandemic, the decision by Unionist Councillors on ABC Council to spend at least £120,000 on a one sided jingoistic celebration of the partition of Ireland is entirely disgraceful.

“Our party worked with Council Officers and other Councillors over many months trying to reach an acceptable and appropriate way to mark this anniversary.

“At the end of that process unionists in both parties rejected all that work and decided to go with costly one sided events, including nearly £80,000 on a one off event.

“Once again Unionist councillors have disregarded the feelings of half the people in the Borough, many of whom are struggling financially in these unprecedented times, to use their ratepayers money to fund a jamboree for unionists. It’s grossly unfair and offensive.”