Eventsec have been employed to provide assistance in relation to the reopening of the recycling centres and local parks, it was revealed last night 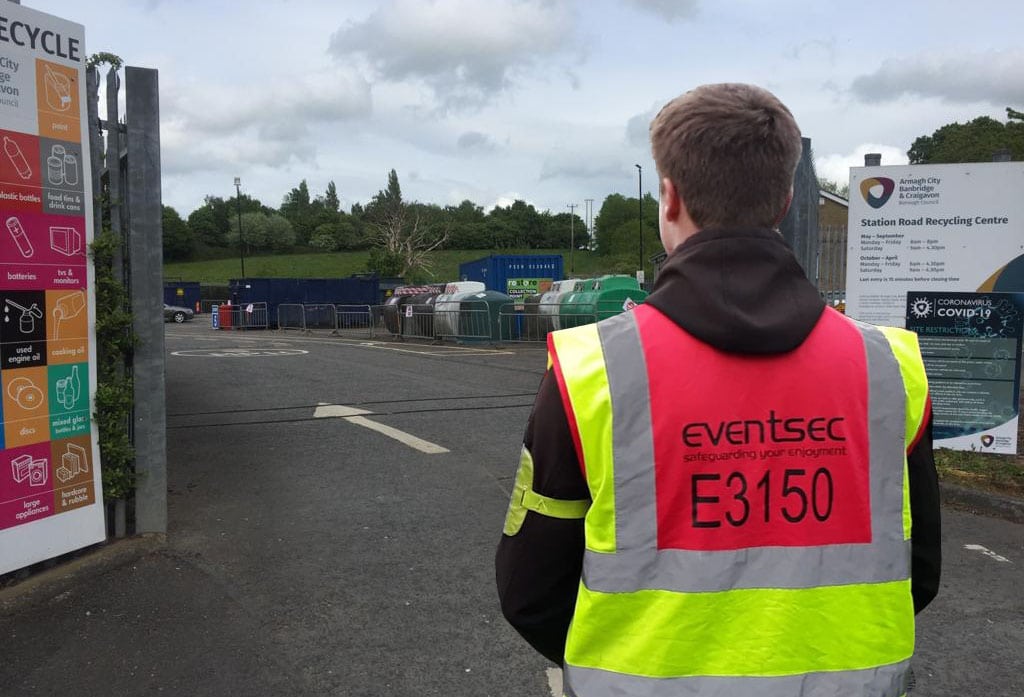 Armagh City, Banbridge and Craigavon Borough Council has been employing external staff to fulfil duties while its own staff are being put off on the Government furlough scheme, it has been revealed.

Armagh I reported last month that the council could potentially be looking to furlough in the region of 200 staff after it was revealed it stands to lose up to £1 million a month for as long as this pandemic persists.

Now it has been confirmed that staff from the Belfast-based company Eventsec have been employed to provide assistance in relation to the reopening of the recycling centres and local parks.

The issue led to a barrage of questions being raised by a number of DUP councillors who expressed concerns and demanded answers and these were put to the strategic director Mark Parkinson.

He confirmed the employment of “two teams” of personnel from the company, his response coming during Tuesday night’s remote meeting of ABC Council.

DUP group leader, councillor Mark Baxter, raised the issue of resources, which had been cited as part of the reason why a phased reopening of the borough’s recycling centres was required.

“We are furloughing staff yet we have a third party in the amenity centres and in the parks as well,” he commented.

“That is causing a lot of concern with members of the public who are asking me the question and are asking my colleagues the question, is ratepayers’ money being used for a third party and their staff, putting them into parks and amenity centres, yet we are talking about furloughing a couple of hundred of our own staff, or whatever it is over the next few weeks?”

Mr Baxter said he thought it was “prudent to bring this up in a public forum”, adding that he had raised it on several occasions.

He asked strategic director Mr Parkinson for “clarity on why we have to use these folk when we are talking about furloughing staff that could be redeployed very easily into those roles”.

His party colleague, Alderman Stephen Moutray, also raised the issue directly when he asked: “To what extent are we going to continue to use Eventsec?

“How many locations are we dealing with across the borough? And is there a considerable pressure around resources because the director keeps referring to when resources allow? What exactly is the picture with resources at the moment?”

Mr Parkinson confirmed that they had used two teams of Eventsec staff “to try and help with social distancing, anti-social behaviour and other things” in relation to reopening local facilities.

“We need to take into account that this was the first opening of council services since closing due to Covid-19,” said the strategic director.

He explained that Eventsec were currently “providing short term security at the recycling centres” and this was something that had been continually reviewed. He said they had been there to assist staff and their support role had been to protect staff.

Mr Parkinson confirmed that they had actually had to direct folk to leave the queues at the recycling centres if they did not have the correct waste.

But because this was only the first week this would change and “in time that will actually disappear and we will stop using Eventsec”.

In terms of the ongoing employment of Eventsec, Mr Parkinson revealed: “In relation to parks we are looking to terminate that towards the end of this week, the recycling centres we’ll keep a little bit more but not substantially longer.”

Alderman Moutray enquired why council staff “are not being redeployed to some of these roles?”

Mr Parkinson confirmed they had been redeploying people to some roles and had been “doing the best in difficult circumstances at the moment”.

The redeployment of staff, he explained, was actually something which was kept under review.

Added Mr Parkinson: “It’s not just moving people around. It’s the additional training associated with it as well, which we always need to take into account.”

He said going forward he could envisage “more staff being redeployed to different parts of the organisation” but added that that could only be a stop-gap solution and they needed to review the way they operate.

Mr Parkinson had confirmed that 25 per cent of staff within the environmental services department were on sick leave.

Councillor Baxter said given the situation that was “understandable” given the fact that many people were shielding.

But he raised concerns over the issue of ‘task and finish’ operations, where staff are paid to complete a task and then go home.

Said councillor Baxter: “What concerns me nine or 10 weeks in and with support coming from the government, the staff across the place are on task and finish. How many hours of the 37 or so are they now doing if they are down to 25 hours? That means we are not 25% down but probably more like 45 or 50 % down on actual staff hours.

Mr Parkinson said that, from a council perspective, one of the key issues was to keep staff safe and to get them home as soon as possible.

At the start of this emergency situation, he explained, this had meant that a number of services went to task and finish, such as the waste collection service.

But Mr Parkinson said it was important to say that the collection service still collected the same rounds, the same waste and were able to carry out the duties they had to carry out.

From a park perspective, he added, there were people employed who were doing the minimum that is required to maintain those facilities.

Mr Parkinson said this was something that was kept under review in relation to Government advice.

DUP Councillor Darryn Causby pointed to the director’s explanation in relation to employing Eventsec workers and highlighted his reference to “two teams” and “some at amenity sites”.

He said: “I would like to know how many Eventsec staff are the council currently employing, as in personnel, not how many teams?

“And the other question is how much is this costing us per day and, given that we have them on site now, when do we envisage that we will no longer require Eventsec?”

Councillor Causby also picked up on the issue raised by his colleague Mr Baxter when he continued: “We are paying staff 100% to task and finish and then go home, which under the circumstances may be fair enough.

“But then we know we are short-staffed in other areas, therefore we are having to bring an external company in to make up the numbers to assist council staff in other departments to fulfil their job to full capacity.

“That’s concerning in the sense that we are paying staff, and letting them go home early, and then bringing in additional support so we can open our amenity sites. And then we are talking about furloughing 200 members of our own staff and yet we can’t get our sites and our parks opened and closed by our own council staff. That to me doesn’t seem right. It’s very confusing.”

Mr Parkinson confirmed there were 10 Eventsec personnel employed in a couple of teams in parks, who were “due to finish this Friday”, while there are a number of others employed supporting staff in the four recycling centres.

He explained that these third party workers were not employed within the confines of council and are “actually providing the main security first line of contact”.

He said they had been dealing with any issues from people using the recycling facilities and admitted “we have had one or two”.

Mr Parkinson said Eventsec had actually been on hand to help protect staff and added: “They are not carrying out the duties which would normally be carried out by council staff.”

In relation to the cost of employing the staff involved, the strategic director said he did not have that to hand but would have it made available for councillors.

Earlier in the meeting, Ulster Unionist councillor Sam Nicholson had also raised the issue of furloughing of staff and voiced concerns that some staff might have been furloughed at 100% pay and this, he believed, should be reviewed come June.

He said: “We would be very supportive of the 80% because I think in the current climate that we are in as a council financially and a £10 million potential shortfall we have to save every penny. I think staff would understand that.”