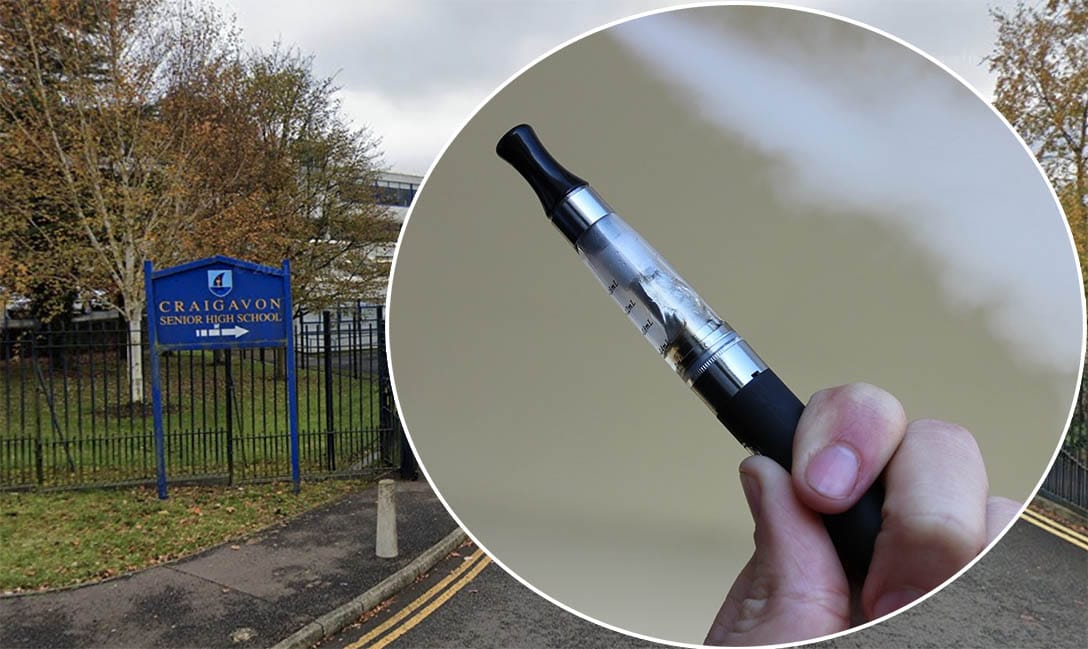 The parent of a child at Craigavon Senior High – taken to hospital after unknowingly vaping the drug ‘spice’ – says “the thought my child going into school scares me”.

The mother, who did not wish to be named, claims her child (we have removed the pronoun to protect the identity of the student), who attends the Portadown campus, “is not safe in school” and is contemplating only sending them back for exams.

On Thursday, Armagh I reported how two pupils on consecutive days this week required the intervention of the Northern Ireland Ambulance Service, however, these were not isolated incidents.

Speaking to Armagh I, the mother of a young victim revealed they spent six hours in hospital vomiting and hallucinating – the effects of which are still evident days later.

“There is going to be a child not making it out of that school. What on earth are they doing in there?” the mother slammed.

“My child is afraid of getting jumped in school, they’re so afraid of talking up about it,” she added. “There are messages going back and forth on social media goading other children. Obviously at that age the pressure is on.”

“I just got the call from the school to say an ambulance was coming and that my child was in the medical room – that’s all they told me, so I raced to the school.

“They spent six hours in hospital, hallucinating, seeing clowns, numbers, heart racing, sweating; I was just trying to keep them calm in the hospital bed – it was so scary!

“The doctors conducted a urine test and told me that it is very hard to trace the likes of that stuff because there are so many mixtures in it, so the doctor just gave my child a good talking to.

“My child told me they had learnt their lesson and that never again would they take anything off anybody. It scared the life out of them and me.”

The worried mum explained how their child unknowingly took the substance, thinking it was something else entirely.

“I don’t condone it but at the end of the day my child is still a victim of somebody putting that stuff into an e-cig and letting on it’s only ordinary e-cig oil.”

She added: “I was called in and had a meeting with the principal and I asked what was going to happen here. They told me they searched everyone and couldn’t find anything but it could just look like an ordinary e-cig – they did confiscate some e-cigs – but sure how do they know what’s inside them?

“My child ended up in detention. Yes, they made a very bad mistake but they paid for it.

“They are now scared going in to school. These ones smoking the spice are the ‘cool’ ones thinking they can handle it but they can’t. These kids are feeling the pressure, other kids thinking it’s a good laugh. There are even Snapchats going about making light of ‘spice victims’.”

The parent admitted to still feeling “unsettled” despite meeting with the school.

“I had to ring again and ask what was actually happening to sort this out but they said there was no proof of anything and that they couldn’t do anything. Oh my God, that’s shocking. A child is going to be carried out of there – a child is going to die.

“Seeing my child in that hospital really scared me. I just looked at them and thought ‘this is going to get worse and worse’.

“And then when I saw that article last night I thought ‘oh my goodness, I have to say something here’. I have spoken to councillors about this and asked them to please, please say something.

“Even the thought of my child going into school scares me, they’re not safe in school, so I was thinking of just sending them in for exams and then bringing them out. They’re just not safe.”

She continued: “I just want other parents to sit down with their children and warn them not to be taking anything off anyone else. Please educate them on the dangers as best you can.

“I have been pushing to go to the police with this but my child is begging me not to because they’re life would be made hell. They just want to do their exams and get out of there.

“I just hope now the school step up. I hope it’s not too little too late, or that it takes the death of a young person to make real change.”