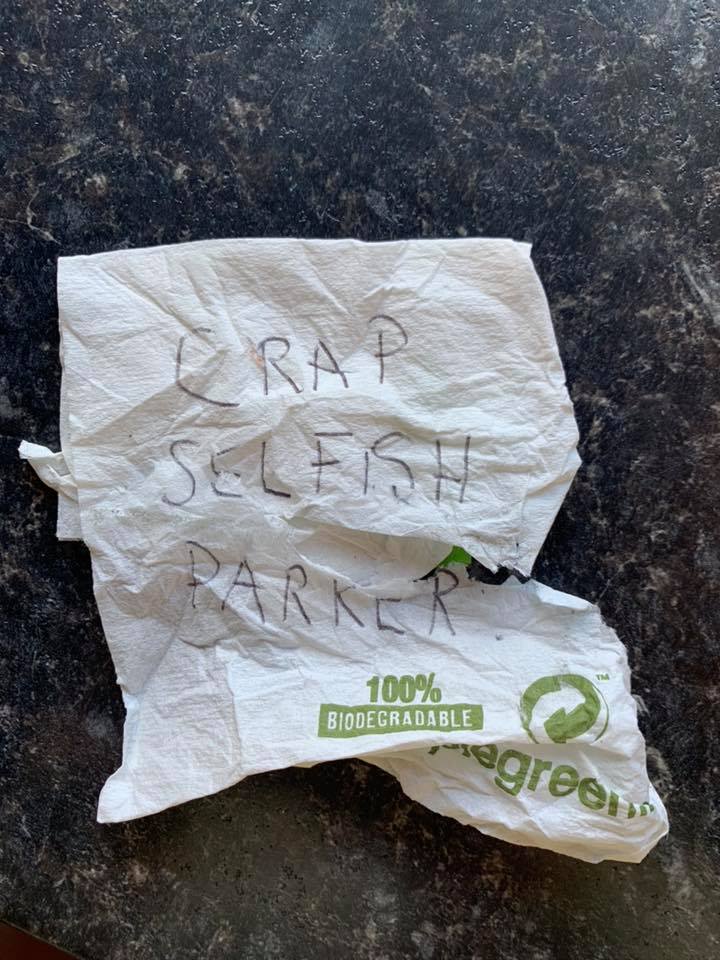 A Co Armagh nurse who found her car damaged and a note branding her a ‘crap selfish parker’ after she completed a 13-hour shift says she has been heartened by public support.

Ciara Mallon, who works at the A&E in Craigavon Area Hospital, had parked up and made her way to work last week as usual.

But when she returned, some thug had scrawled a vulgar note – labelling her a ‘CRAP SELFISH PARKER’ – before proceeding to key her car the whole way down one side.

An outraged Ciara uploaded a picture of the note and damage on Facebook and hundreds of people shared her post.

And tonight (Tuesday) – as police appealed for information and branded the incident “disgusting” – it has been revealed that a second vehicle was damaged at the hospital car park just the following day.

The first incident happened on Monday of last week.

As she shared details of the incident on social media, Ciara revealed that she had just finished working a 13-hour shift in A&E.

And she hit back at the culprit, saying: “Sorry that I wasn’t overly concerned about my one wheel over the parking line at 7.30am when it was 0 degrees and I was exhausted. Scumbag.”

Ciara had no idea of the response her words would receive and the huge wave of public sympathy.

She told Armagh I she felt “heartened” by the support and the kind words of people who shared her outrage.

“I never expected so many people to share it and support it,” said Ciara.

As for the damage, she does not yet know the cost of repair, but the culprit used a key to scrape right along one side, from the driver’s door to the fuel cap.

“I haven’t priced it yet,” adds Ciara, who hopes that someone will come forward to help the police who have appealed for witnesses.

The area is not covered by CCTV and it is not known if there have been other similar incidents previously.

Ciara admits she was completely taken aback to return and find what had happened.

She added: “I was shocked and very upset. Nothing like this has ever happened me before, but I don’t know about whether it’s happened in the car park before.”

The despicable actions of those involved have been condemned by the PSNI, who have appealed for witnesses and information to catch those responsible.

Police have branded the incident as a “disgusting” attack on someone whose job had been saving lives, by someone taking exception to her parking.

Appealing for information, PSNI in Craigavon also turned to social media and posted: “Someone had scraped the entire driver’s side of her car, a blue Vauxhall Astra, from the fuel cap to the driver’s door. Someone had also left a note saying “CRAP SELFISH PARKER”.

“Let that sink in for a moment. A nurse, who’s job is literally life saving, had her car keyed, apparently due to someone taking exception to her parking. Disgusting, and not something that ANYONE with any information about it should stand for.”

The second incident happened the next day, Tuesday, October 30.

Police say workmen – on site trying to make services even better for everyone – had their van damaged.

The white VW Transporter had the rear door forced between 1.30pm and 2.30pm.

“An attack on either is an attack on all of us, and should never be tolerated,” said the PSNI. “If you know anything about either incident, get in touch.”