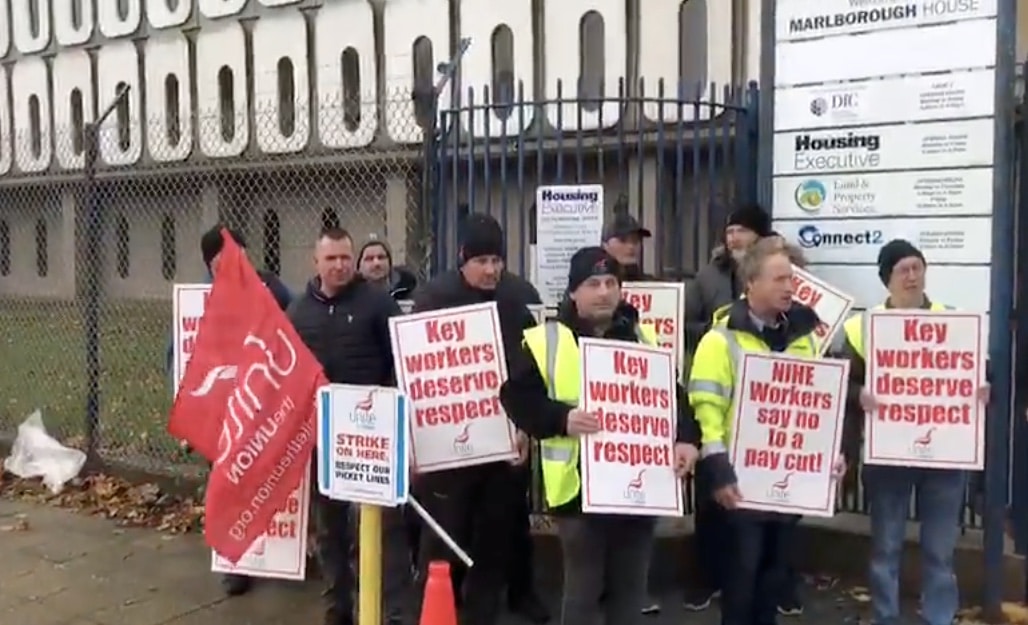 As industrial action by Housing Executive workers enters its 23rd week without resolution, Unite has demanded intervention from the Department for Communities.

Thousands of social housing tenants have been left without needed repair and maintenance work as a result of “management intransigence”.

Unite the union has written to the Chief Executive of the Northern Ireland Housing Executive, Grainia Long, after its members overwhelmingly rejected a pay offer made by management at the Labour Relations Agency in December.

The pay offer was for a one-off non-consolidated payment of one thousand pounds and a pay point increase for grades 1 to 3 which Unite say, “would have benefited only a small fraction of striking workers”.

The offer was rejected overwhelmingly in a ballot conducted on picket lines on turnout of 93.5% percent and rejection majority of 99.5%

The workers who are employed in Portadown, as well as North and West Belfast, Coleraine and Derry/Londonderry will therefore continue their strike action in pursuit of a fair pay increase for the 2021-2022 year.

Their strike is now into its twenty-third week and has led to ballooning impact on maintenance services for social housing units.

In the midst of a homeless crisis, there are 193 social housing units in the affected areas lying empty despite having ‘live tickets’ issued for work to change their tenancy.

In addition, more than 4,400 repair and maintenance jobs judged to be ‘emergency’ have been left undone and a further 9,600 works deemed routine have not been completed. 246 adaption jobs needed by disabled tenants are also outstanding.

Unite General Secretary Sharon Graham blasted the NI Housing Executive on its “failure to extend a fair pay increase and end the strike and the impact it was having on social housing tenants”.

“The fact that after standing 23 weeks on cold and wet picket lines, striking housing workers voted with more than a 99% majority to reject this pay offer tells its own story,” said Ms Graham.

“These workers don’t want to be standing on picket lines but have been left no alternative because of the intransigence of management. These workers continued their strike right through the holiday period and while they want to get back to work they are determined to do so having won respect and a decent pay improvement.

“The well-paid Housing Executive directors and the senior officials in the Department for Communities must now intervene. They need to make a decent pay offer, end this dispute and the impact it is having both on my members and on vulnerable tenants. Their failure to do so to date is nothing short of a disgrace.”

Regional officer for Unite, Michael Keenan pointed to the inadequacy of the pay offer made by management.

“Housing Executive bosses have sought to muddy the waters by referencing the 2022-2023 pay offer with has nothing to do with this pay dispute which is about the 2021-2022 financial year.

“They have also referenced the pay and grading review process which six years ongoing at this stage and is not an appropriate short-term solution and doesn’t even benefit the poorly-paid craft and trades workers we represent. The latest offer by the Housing Executive was for a non-consolidated, one off cash payment and for a single pay point increase restricted to the bottom three bands and which wouldn’t benefit any but a small fraction of Unite members.

“Regardless of whether they would have personally benefited from this offer, the workers have voted to stand together; more than 99 percent voted to reject this deal on a turnout of more than 93 percent. Skilled and trades housing workers are striking for a pay increase that will start to bridge the chasm between what the NIHE pays them and going industry rates. The Housing workers are determined to win a decent and fully consolidated pay improvement.”