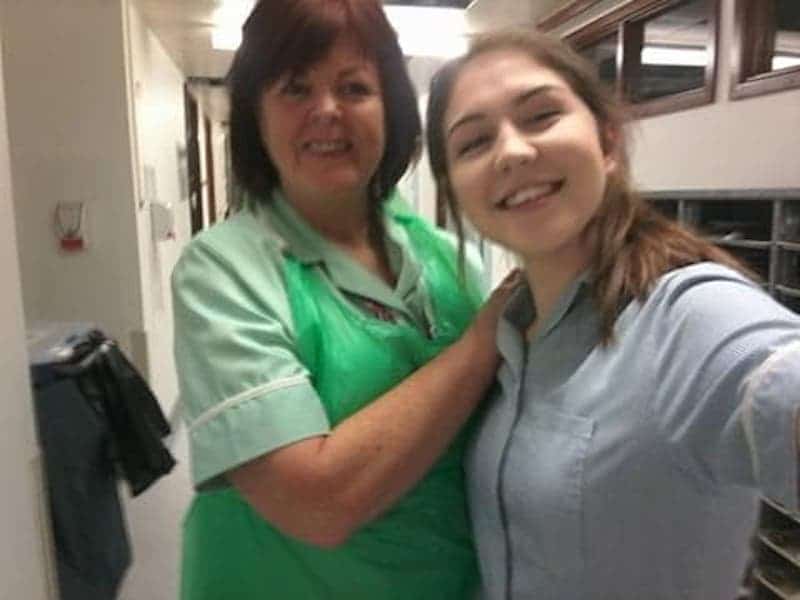 A hospital domestic working on the Covid-19 ward says she is “still in bits” after delivering a baby in the car park – all while on her lunch break.

Colette McAlinden was sitting casually reading a book in her car at Craigavon Area Hospital earlier today (Sunday) when she sprang into action under the most dramatic of circumstances.

The 56-year-old from Lurgan, speaking to Armagh I, said she heard screaming, which prompted her response.

“I thought it was maybe people messing about at first,” she recalled.

“But these squeals got louder and louder and I thought ‘frig, somebody’s in trouble here’, so I got out of my car and this man was waving his arms frantically shouting about his wife and I thought ‘oh no, has he done something to his wife’.

“I told him to calm down and told him I would help. I saw she was well on in labour. I thought, we’re beside the ambulance station here so I sent dad around the corner to get help.

“I then phoned 999 and explained what was happening, and that I didn’t have a clue what to do. They had to tell me to calm down.”

Despite her many years of working in a hospital, Colette was faced with something truly unique and daunting at the same time.

And to make mattes worse, she was attempting to deliver a baby with an operator on loudspeaker and on top of a woman in labour in the passenger seat of a small van.

“I was told by the operator to lie her down by putting the seat back, so I pulled the lever and the lady went flying – I could only say ‘sorry’ but she was more concerned about giving birth.

“I had to undress her and see what I had to see. I was then putting my hand over her pelvic area and pressing down but couldn’t see anything.

“Next thing, there it was; ‘I see the head, I see the head’ I started shouting back down the phone. They told me not to panic and leave it up to mum to do the rest of the work but she was out of it, in agony.

“She kept pushing and pushing despite my best efforts to get her to listen to the advice, and not to push until she had a contraction.

“Then, all of a sudden out of nowhere, the child came at about 80mph – she almost hit the windshield!”

To complicate an already challenging situation, the baby wasn’t showing much signs of life.

“The child was purple,” she recalled.

“Is the child breathing? ‘No, I said.

“Is the child crying? No.

“Okay Colette, this is what I want you to do, I want you to clear her nasal passage. I don’t know how to do that. They talked me through it all as I begged for the ambulance.

“Next thing, the crew came but not before I tried to revolve the child to loosen the umbilical chord from around its neck.

“She kept asking me what it was and I just said it is a baby, ‘I haven’t looked, it’s just a baby’. It’s crying and it’s healthy was all that mattered at that time.”

A once-in-a-lifetime experience for Colette – and for most people – but Colette looked at the time when the dust started to settle only to realise she had gone over on her lunchbreak!

Just after delivering a baby in one of the most dramatic scenarios possible, the grandmother of eight, went back to work on the Covid ward, one of the most difficult jobs in the hospital at present.

Said Colette: “I rang up to my supervisors and told them I knew I was late but have I got a story for you.

“I went back up to my ward because my shift didn’t finish until 3.15pm. I said I wanted to stay on and finish it, plus I wanted to tell the girls about what had happened.

“The girls didn’t quite believe me at first because I am a bit of a prankster.

“We look at death daily and we see people suffering but then this wee innocent new-born baby comes along, it’s just amazing. I mean, I have her wee lilac face in my hands and I haven’t a clue what to do.”

Colette and her colleagues rang down to 2 West to see if all was okay and thankfully mother and baby were doing great.

“That’s all I wanted to hear because I was so worried I messed up – the child could have died in my arms,” she said.

Colette was also full of praise for the operator who was so calm and professional, walking her through each of the steps.

“She was so calming; it was just the scariest thing. The two of us in the front of that van and a child with an umbilical chord around its neck. I was never as glad to see an ambulance crew.”

A friend and colleague told Armagh I they were all so proud of Colette and the cool, calm and collected way in which she acted once the initial shock and panic of her situation wore off.

She said: “Colette is a domestic cleaner who works tirelessly on the Covid ward.

“She was out in her car having a well-earned break when she heard screaming.”

Her colleague added: “Not only is she a hero working on the Covid ward but delivering babies on her lunchbreak too!

“From all the staff on 2 South, Colette McAlinden we salute you!”