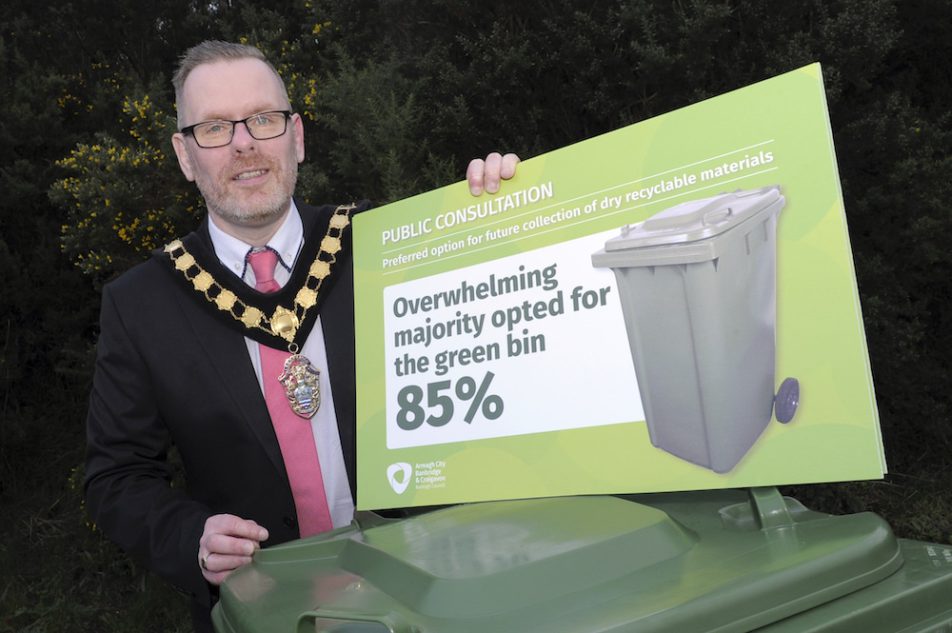 Green bins will be rolled out to every household across the Armagh City, Banbridge and Craigavon Borough.

The overwhelming response to a public consultation, carried out by ABC Council on the preferred option for introducing a fully harmonised kerbside recycling service across the whole borough, has strongly influenced elected members’ decision to vote unanimously in favour of extending the green recycling bin service to every household.

Different systems for the collection of dry recyclables, inherited from the former legacy councils, are currently in operation across the borough.

The contract period for the kerbside box system is due to expire in 2021 which has provided impetus for the Council to review options for providing a standardised recycling service that works best to meet the needs of all householders, while also taking account of economic and environmental considerations.

Last year, the Council commissioned an independent study to appraise a number of possible options against a range of financial and performance parameters.

This was further supplemented with a public consultation throughout July and August, when residents were asked to choose between two options – a green bin collected every fortnight or a triple stacked wheelie box collected every week.

The consultation attracted an unprecedented number of responses – the highest so far in the Council’s history – with 85% of 9,563 residents who completed the survey, expressing a preference for the green bin.

The findings of the consultation complemented those of the study which concluded that the green bin, which allowed for the co-mingled collection of dry recyclables including glass in one receptacle, was considered to be the best all-round option for the borough.

Welcoming the Council’s decision to move forward with harmonising its kerbside recycling service, Lord Mayor Councillor Kevin Savage said: “I’m delighted to see so many local people play an active role in deciding how a
key service is delivered.

“It’s only right that they have a real say and stake in important decisions that affect them. This decision marks a significant step forward in the ongoing harmonisation of key frontline services, bringing all 87,000 households onto the same recycling system. Now we can move forward with this all-important service in a one Council approach.”

A considerable amount of preparatory work needs to be undertaken in order to make the necessary arrangements for introducing this planned service change. The next stage is to develop a detailed implementation plan to outline an indicative timeline of when the service can be rolled out.

The Council will keep the public informed of progress in due course.

Cusher DUP representative Alderman Gareth Wilson commented: “This is one of the most significant decisions since the merger of the three council areas.

“The fact that separate systems for recycling existed, has been a bone of contention for residents who favoured one method over another and many continually asked the question why, when the merger had taken place, recycling systems didn’t naturally follow.”

He added: “With the public consultation now giving a very clear message on what the public wants to see, I look forward to efforts intensifying to roll out the green bin recycling model across the district.

“I also pay tribute to the teams who have delivered recycling across the Borough over the years since the merger. Recycling is an important service and one that can be grown even further to ensure that ABC is as environmentally responsible as it can be in this era.”