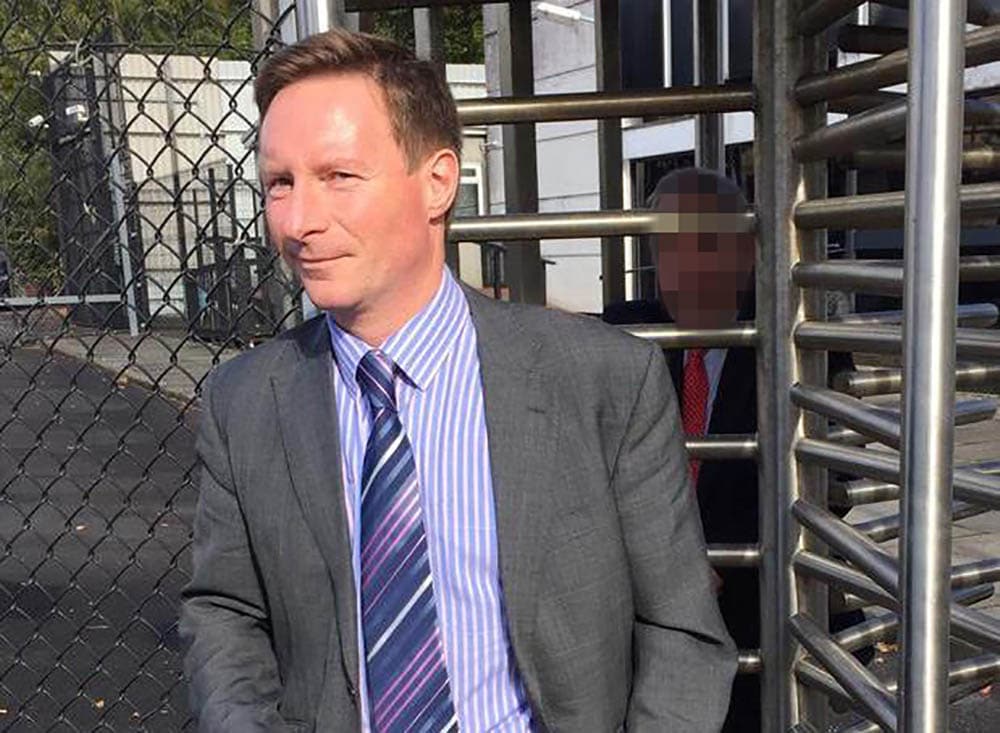 Jailing Mark McClure at Craigavon Crown Court, Judge Patrick Lynch QC told the 52-year-old that as a “highly respected and highly regarded senior consultant,” he then abused that respect and trust to carry out his seedy offences in the toilets at Craigavon Area Hospital.

“Perhaps even more repellent is that he carried the same activity at his own home, recording and retaining material for his own sexual gratification,” said the judge who expressed “surprise” that the maximum sentence for voyeurism was a two year jail term.

Ordering McClure to sign the police sex offenders register for the next ten years, Judge Lynch said while some victims were “fortunate” to not even know they had been recorded, he had two victim impact statements which manifested the psychological distress McClure’s behaviour had caused.

Last month McClure, with an address on the Grange Road in Bangor, entered guilty pleas to 11 counts of voyeurism committed on various dates between July 9, 2014 and December 23, 2014.

It’s the second time that McClure has been dealt with for voyeurism as three years ago in February 2017, he was handed a nine month probation order for trying to record ladies using the toilets in Hillsbrough Private Clinic.

It was that investigation, prosecuting QC Neil Connor outlined previously, which led to the latest offences.

In the offences he committed in February 2015, McClure secreted his iPhone in the air vent of the unisex toilet at Hillsborough Private Clinic and after his offences were uncovered by suspicious staff, police seized his phone, a computer and a memory stick.

When those pieces of hardware were eventually examined more than two years after they were first seized, cops uncovered covertly recorded video clips

Taking each location in turn, Mr Connor described how two family friends were recorded using the toilet in McClure’s home which at that time was a sprawling five bedroom house with grounds and stables on the Edentrillick Road in Hillsborough.

“The position of the phone was such that both victims’ private parts were clearly visible on the recordings,” said the barrister adding that the ladies had “identified themselves” from stills extracted from the footage.

Moving to the offences at the hospital which had been McClure’s “primary employment as a consultant radiologist” and a place where he had worked for 15 years, Mr Connor explained how McClure “secreted his phone in the disabled toilet of the medical education centre and recorded a number of females using the facilities.”

Three unidentified women were recorded, one of them twice, with that lady appearing “to be a staff member” as she had a lanyard around her neck, said the lawyer adding that in these clips, the private parts of two women were “clearly visible” while with the third the viewer “could see her bare bottom.”

As regards the footage taken at the radiography department, that footage differed slightly in that rather than hiding the phone and hoping it wasn’t found, McClure took a real risk of being caught by “holding his phone against what appears to be a gap in the door.”

In this part of the offending pattern, the court heard that McClure recorded three women, two of whom remain unknown and one who has been identified as a former colleague.

Mr Connor said that akin to the offences at the private clinic, there were a number of clips which recorded McClure secreting his phone and “positioning the camera in the toilet.”

Arrested and interviewed about these latest charges, father-of-three McClure claimed he couldn’t really remember if there was footage in the computer and memory stick as he he had been suffering from psychological and financial stress, “even though he was in receipt of a not insubstantial income,” said prosecuting counsel.

In his sentencing remarks today, Judge Lynch revealed the monthly household income was around £15,000 but labelled his lack of memory claims as “obvious lies”.

He further revealed that according to reports from probation and a psychologist who has been treating McClure, his attitude to the offences was “less than frank and forthcoming” as he tried to minimise his involvement, denied an interest in voyeuristic behaviours and engaged in “obfuscation” when pressed about his behaviour.

He told McClure the fact that he recorded his victims was an aggravating feature, leaving them fearful of who all had seen it and whether it had been disseminated or uploaded to the internet.

“Certainly there’s no suggestion that they have been shared or uploaded but….that has causes a great degree of concern to the victims,” said the judge.

The victims, Judge Lynch quoted from their statements, felt “violated and deeply distressed at such an invasion of privacy” with one having to undergo therapy and another finding herself habitually checking for hidden cameras in work.

He said while there were mitigating factors such as the delay in bringing the case to court and McClure’s guilty pleas, that “must be put in the context” of his offences and the aggravating features.

As well as the jail sentence, the judge also imposed a seven year Sexual Offences Prevention Order which compels McClure to register any mobile phone with police and to allow officers in to his home to check that he is complying.

A General Medical Council spokesperson said: “Following an Interim Orders Panel at the Medical Practitioners Tribunal Service, consultant radiologist McClure was allowed to continue to practise while the GMC carried out its investigation but with restrictions such as not being allowed to deal personally with patients.

“Patient safety is at the heart of everything we do and we take allegations of sexual misconduct extremely seriously.

“Any doctor who receives a custodial sentence will be referred for a public hearing at the Medical Practitioners Tribunal Service.”