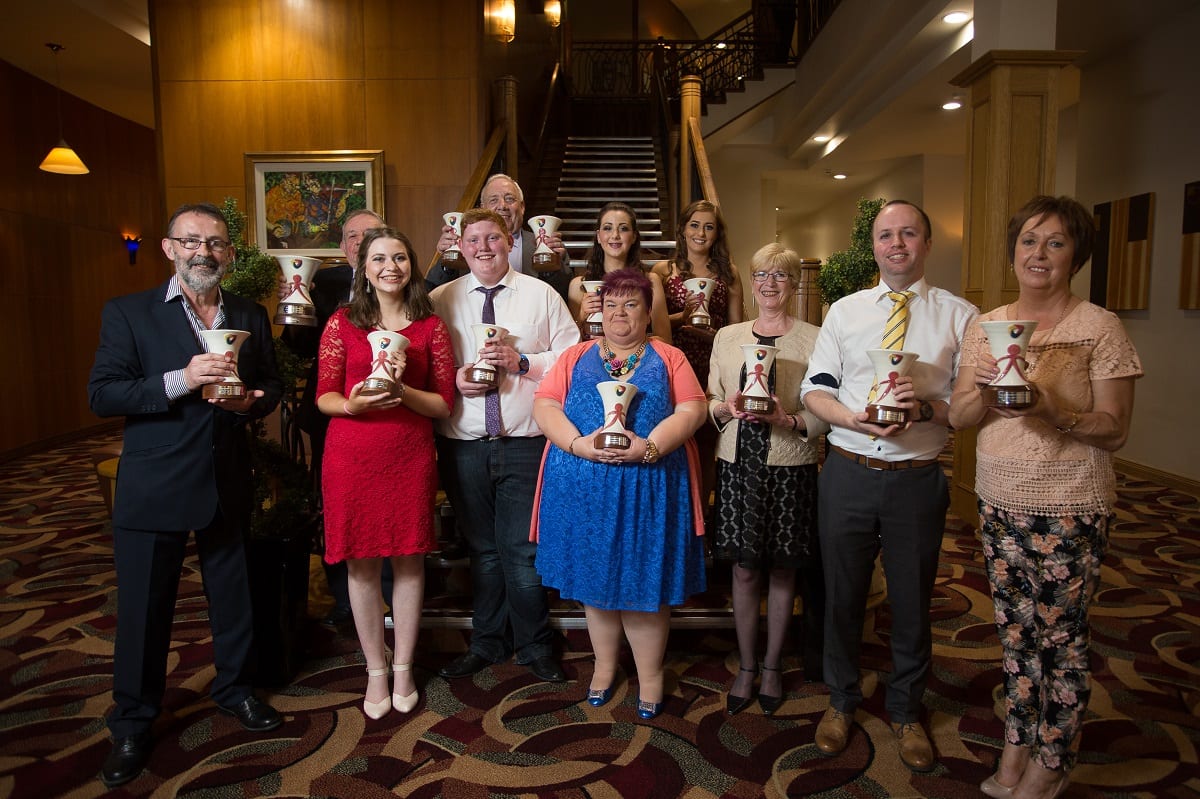 Unsung heroes from across the borough have scooped a prestigious Community Award for their vital contribution and dedication to their local community.

Local champions from areas throughout Armagh, Banbridge and Craigavon were VIP’s at the council’s high-profile gala reception last week.

Sponsored by Almac, this is the first year of the distinguished awards.  Guests enjoyed an evening of entertainment with dinner, music by Swingabella and citations by local well-known radio and television presenter Siobhan McGarry. Grainne O’Neill presented with her Volunteer of the Year Award by cllr. Brendan Curran

“I am delighted to present awards to these fantastic people who provide unrivalled support and help in their local communities” Comments Lord Mayor of Armagh, Banbridge and Craigavon Councillor Darryn Causby, “They are very special individuals who give their own time freely and use their skills and expertise to help others. Congratulations and well done to all – the borough is a richer place because of them”.

“The Community Awards are an excellent opportunity to reward local volunteers and groups who have “gone the extra mile” in supporting our communities.” Comments Jennifer Forsythe, Almac “The awards are very timely with Volunteers’ Week just around the corner. Well done to all the nominees and winners, your passion, drive and commitment for helping and supporting your area has shone through.”

WINNERS IN EACH CATEGORY

Richmount Rural Community Association has been providing a lifeline to older people in the community for over three years. Weekly provision of traditional lunches and sessions in craft, dancing and drama keep minds active and promote healthy living. With a Men’s Shed initiative, bus trips and a community pharmacy this group combats social isolation in a rural area and is described as one big family.

The ABC Community Network has been providing on the ground support to the community and voluntary sector for 20 years. Its range of physical support services and practical assistance helps to establish and develop groups so that they can be better trained, informed, networked and publicised to serve the communities of Armagh, Banbridge and Craigavon.  They have also established a newly refurbished community hub in Portadown and hosts the community radio station ABC 100.2 FM.

The Edgarstown Residents Association continues to improve the lives of their community through community clean-ups, healthy living projects and fun days. Their homework club is one of the educational programmes supporting young people and their befriending scheme for the elderly does amazing work to restore a strong community pride in an area that has faced many challenges. PIC 22 Award presented by Chair of the Leisure and Community Services Committee, Cllr Mark Baxter

The Keady Cultural and Festival Group has revived a rich cultural activities calendar, benefitting the local area. Dedicated to solving local problems of anti-social behaviour and social isolation they provide volunteering opportunities and improve community self-esteem through this provision of safe and affordable events, festivals and activities. PIC 23 Award presented by Chair of the Leisure and Community Services Committee, Cllr Mark Baxter

Founded in 2010, Oasis Youth caters to over 500 members through 11 varied projects per week. Oasis empowers young people from 15 different cultures by giving them opportunities to develop leadership and employability    skills. This is evidenced through the 2,000 volunteer hours completed by members in 2015. Oasis promotes an integration model for BME youth that is both vital and recognised as a good practice model in Northern Ireland.

Richmount Rural Community Association have been heavily involved in good relations work in their area for years, with their committee consisting of representatives from the local ethnic groupings. Their inclusion work with the Bulgarian and Ukrainian community has provided language classes, family support training and media skills training to over 200 people. Richmount Rural Community Association has also proudly been involved in a host of cross cultural community events and exchange trips.

The Bann Youth Camp Steering Group is a cross-community group made up of 10 young people aged 15-18 years old. Meeting on a weekly basis, they have provided residential opportunities for young people from a wide range of backgrounds to participate in diversity workshops. They have facilitated the formation of new friendships, the development of leadership skills and more awareness of community issues. What was meant to be a one-off project is now entering its second year of valuable work.

The Voice of Recovery volunteers run many services from the Recovery Café, including a clothes and food bank, a reminiscence cafe, lunch club, acoustic music nights and training and workshops on addiction and recovery. The Voice of Recovery group is mainly made up of recovering alcoholics that have showcased their singing performances at major health conferences across the UK and are currently recording an album. The value of their work is shown through the statistic that 90% of people have abstained from drinking as a result of participation in Voice of Recovery activities at the café.

The Inland Waterways Association of Ireland was formed 10 years ago and it’s 50 voluntary members aim to have the Newry Canal restored and reopened. Recently, a 4 mile stretch has been rewatered for canoeing and small boat activity through the building and installation of new lock gates and clearance of vegetation.  The group has also opened a heritage centre and produced the Canal towpath history app. Encouraging physical activity, they also run a weekly cycle safari as well as wildlife gardening and planting initiatives.

Grainne O’Neill sadly lost her Mother Annie to Pancreatic Cancer on 30 January 2014. Grainne went on to realise her Mother’s vision for a charity to give cancer patients a “fighting chance”. She has worked tirelessly with ‘Fight On For Annie’ to raise thousands for pancreatic Cancer charities; all while studying for a degree in Events Management. Grainne has reached out and supported countless cancer sufferers, put boundless energy into raising awareness of the illness and has lobbied extensively to get the provision of life-lengthening drugs which are currently only available in England.

The Youth Council, PCSP & PSNI Partnership has demonstrated an innovative approach to addressing serious issues of safety and criminality amongst young people through the ‘Night Safe & Street Scene’ project. Innovative workshops are have been delivered to school and youth groups since 2013, each changed to suit current issues as raised by the Youth Council. A resource pack and ‘StreetScene’ props have also been developed to make these workshops truly creative and impactful for their audiences.

Kerrie-Louise Prentice has been part of the Scotch Street Youth Club for five years and has been truly dedicated in her participation of cross community and cross cultural projects. Her increase in confidence and communication skills has seen her develop friendships and give support to those from a variety of backgrounds. Kerrie Louise has gone on to complete over 200 volunteer hours, supporting the rural community at every opportunity, from daily youth clubs to a service-based trip abroad. Kerrie-Louise has been heavily involved in fundraising efforts and has been elected to represent her area in the first ever Children in Need Youth Advisory Panel.

John Wilson has been a community volunteer and fund raiser for local charities for over 30 years. John continues to make a huge impact with the groups he is involved with, including The Birches Vintage Club, Richmount Rural Community Association and Country Comes to Town ( for most of which he was a founding member). John has provided and enhanced services for those in need, promoted the council area and supported residents from all sectors of the Community. His fundraising efforts are legendary, having raised over £600,000 for a host of fantastic charities.