'I hope in the future there’s more action to prevent people getting lung conditions such as tackling air pollution. We shouldn’t wait until people get sick before we help them. There must be a better way' 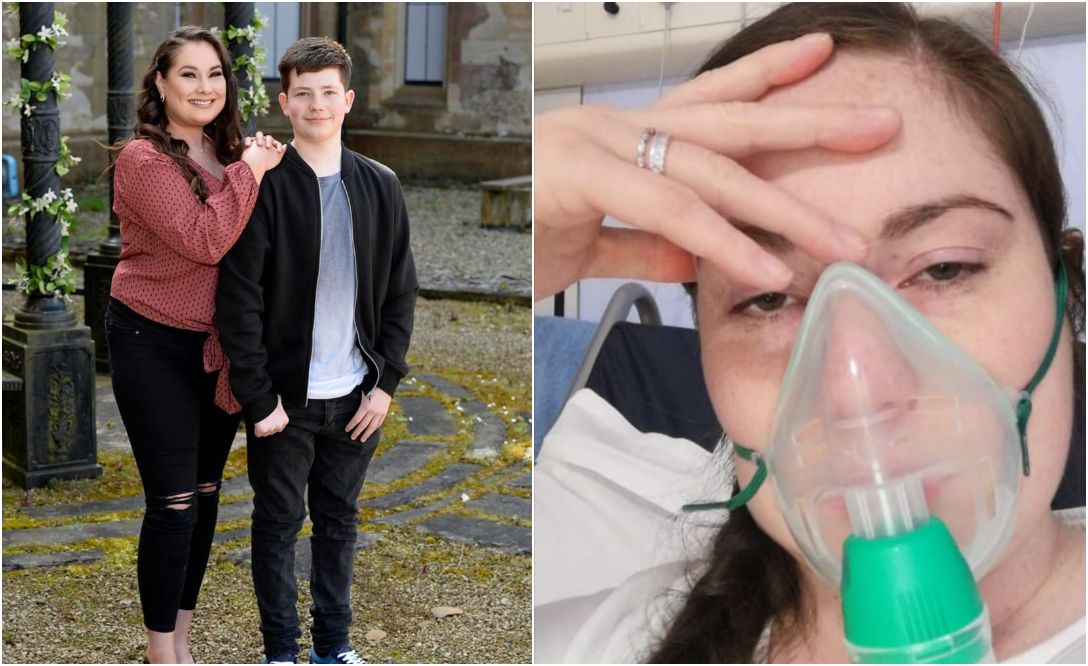 A young County Armagh mum who was “minutes from death” after suffering a severe asthma attack has called for more action to tackle problematic factors for those living with the condition.

It comes as Asthma + Lung UK Northern Ireland releases worrying new findings which show that people with lung conditions in Northern Ireland are more likely to die than those in the Republic.

The charity says the state of lung health in Northern Ireland is “shameful”, as new analysis finds deaths from lung conditions are 11% higher than the Republic of Ireland and are among the worst in Western Europe.

Anouska Black, from Craigavon, had a severe and near-fatal asthma attack in October 2020, an experience which the 32-year-old described as “terrifying”.

She recalled: “I was admitted onto the respiratory ward where I spent five days on oxygen. One of my lungs almost collapsed and I was minutes away from death.

“Thankfully, doctors saved my life but, since then, I’ve had Covid twice and now suffer with Long Covid, so I know first-hand how devastating breathlessness can be.

“I’ve had many different hospital admissions, needing to be nebulised in A&E a few times, stays on the respiratory ward where I have had to be put on oxygen and several courses of antibiotics with steroids.”

With the new research published today (Monday), Anouska does not believe enough is being done to help people like herself.

She added: “I think a lot more support is needed for people like me with lung conditions. There are so many long-term symptoms. I get breathless easily, even just by walking or standing and I am constantly exhausted.

“It’s really important to me that I share my experience to hopefully help make a difference. I hope in the future there’s more action to prevent people getting lung conditions such as tackling air pollution.

“We shouldn’t wait until people get sick before we help them. There must be a better way.” Northern Ireland has a worst death rate for lung conditions such as asthma and chronic obstructive pulmonary disease (COPD) than the Republic of Ireland and one of the worst death rates in western Europe – according to new analysis from Asthma + Lung UK Northern Ireland, the leading charity supporting everyone with a lung condition, formerly known as Asthma UK and the British Lung Foundation.

In fact, the respiratory death rate in Northern Ireland is higher than most of Europe with double the rates of Sweden, Italy and Austria, and more than triple the rate of Finland (38.4).

The charity’s analysis reveals that over a seven-year period, nearly 17,000 people have died from lung conditions such as asthma attacks, COPD exacerbations and pneumonia, in Northern Ireland, according to the latest figures.

The charity says that lung conditions need to be treated as seriously as other major illnesses including heart disease and cancer.

Respiratory conditions make up one of the top three killers in Northern Ireland, with one in five people being diagnosed with a lung condition at some point in their lives. Lung disease costs over £250 million in this region, making it the fourth most costly disease area after mental health, musculoskeletal conditions and heart disease.

The lack of research is hindering the creation of more effective diagnostic tests that would help people be diagnosed accurately and more quickly, new treatments which could reduce symptoms or even cure some lung diseases and new technology, such as AI and apps, that could help people better manage their condition and stay out of hospital.

According to the charity, NHS care is also failing many people with lung conditions, with the majority of people with asthma and COPD in the UK not receiving basic care from their GP, such as help using their inhaler properly and reviewing their medication.

This, says the charity, was the case even before the pandemic placed huge additional strain on respiratory services; over the past two years, many thousands of people have watched their health deteriorate while they wait for respiratory care, and diagnosis rates have plummeted.

Another likely contributor to high death rates is air pollution, which is linked to 800 premature deaths each year in Northern Ireland and is a leading cause of new lung conditions and worsens existing ones.

Asthma + Lung UK Northern Ireland says the Department of Health must urgently introduce a Lung Health Strategy to cut deaths and hospitalisations from lung conditions, saying this will not only save lives but will help tackle health inequalities.

Currently, people with lung conditions in the poorest neighbourhoods are three and a half times more likely to die of a lung condition than those in the richest areas in Northern Ireland.

Again the charity says this could be down to the fact they are more likely to be more exposed to air pollution, poor-quality damp housing and cigarette smoke.

Joseph Carter Head of Asthma + Lung UK Northern Ireland, said: “These shocking stats show that you are more likely to die with a lung condition here in Northern Ireland than in the Republic, despite our universal health system.

“We need to act now to transform respiratory care and save lives. We need all parties to support a Lung Health strategy in the Assembly election and take the radical action that we desperately need.

“The pandemic has brought it to people’s attention that lung conditions can and do kill and how terrifying it can be to struggle with breathlessness.

“As the only UK-wide charity in Northern Ireland fighting for everyone with a lung condition, we have an ambitious new strategy to fight for every breath, including providing our vital services such as our helpline, health advice and support groups.

“But we need the next Executive to prevent lung conditions in the first place by investing in smoking cessation and developing a new Clean Air strategy.

“We want everyone with a lung condition who needs our support to get in touch if they need our help at asthmaandlung.org.uk and to know that we are here for them, fighting for every breath.”