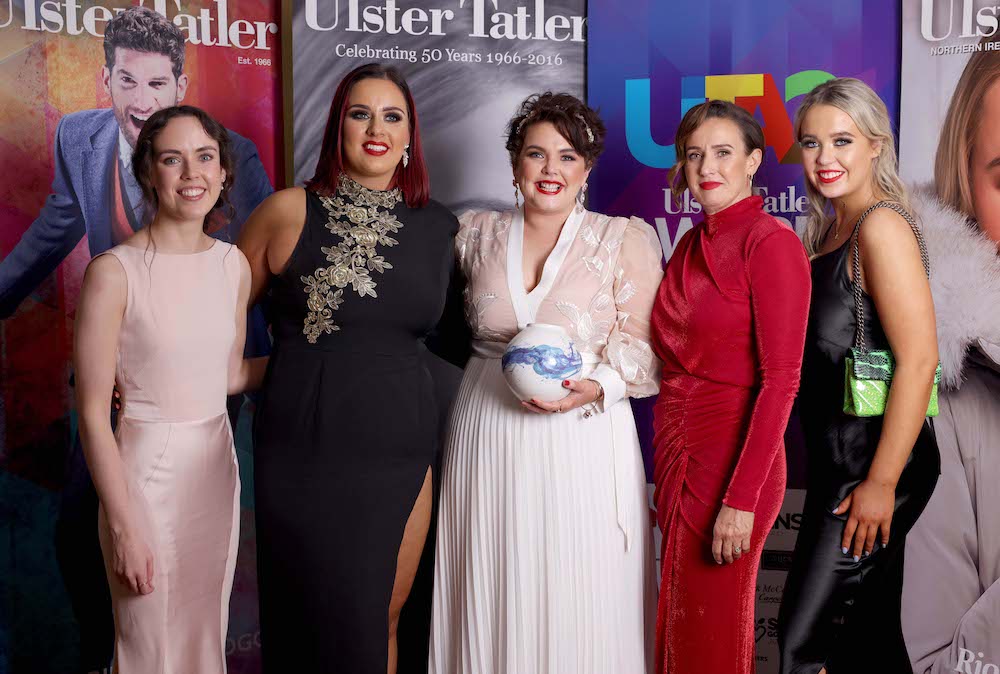 The White Orchid (Armagh) picked up the coveted award for Spa of the Year, alongside Dunamoy Spa and Cottages (Ballyclare) at the 2021 Ulster Tatler Awards. Celebrating are (l-r) Rebecca Jess of Linwoods (award sponsor), Lauren McMullan, Jennifer McKearney, Edele O’Toole and Charley Finlay of The White Orchid.

County Armagh was well represented at this year’s Ulster Tatler Awards 2021 with no fewer than three individuals and businesses from the county and its surrounding areas picking up prestigious titles at this year’s Awards.

Basil Sheils Bar & Restaurant was awarded Restaurant of the Year while Yvonne Perry of Yvonne Perry Interiors achieved Interior Designer of the Year at the awards which honour the achievements of homegrown individuals and businesses, the likes of which have been filling the pages of the province’s leading lifestyle and society magazine for more than 50 years.

Also awarded was The White Orchid Beauty and Spa who picked up Spa of the Year alongside Dunamoy Cottages and Spa at the glittering awards ceremony which took place on Thursday 28 October in the Crowne Plaza Hotel, Shaw’s Bridge.

One of Northern Ireland’s most respected and best loved comedians John Linehan MBE was awarded with the prestigious Lifetime Achievement accolade at the Ulster Tatler Awards in association with Keens Belfast.

The north Belfast-born star picked up the award which in the past has been won by a host of local legends including Dame Mary Peters OBE, Sir James Galway, Brian Friel, Phil Coulter, Gloria Hunniford, Michael Longley, Gerry Armstrong, Barry McGuigan, Terri Hooley, Marie Jones, Hollywood actor Ciaran Hinds and sporting hero Pat Jennings who was honoured at the 2019 ceremony. Other big winners on the night included NI Women’s football captain Marissa Callaghan, who was named Sportsperson of the Year in a hotly-contested category that saw her compete against her own team manager, Kenny Shiels as well as other record-breaking athletes Jonathan Rea, Rhys McClenaghan and Leona Maguire for the coveted title.

All-Ireland champions, Tyrone GAA were awarded the Insight Out Special Merit Award on the night for their outstanding display in the All-Ireland Championship final, bringing the Sam Maguire Cup home for the fourth time in the county’s history. Yvonne Perry Interiors (Craigavon) picked up the coveted award for Interior Designer of the Year at the 2021 Ulster Tatler Awards. Yvonne is pictured here with award sponsor Rob Smith of Hafele.

The Celebrity of the Year award was awarded to Newtownards-born TV star Christine Lampard, who has graced our screens for almost 20 years and went on to become a national success on shows such as Dancing on Ice, This Morning and Loose Women.

The evening wasn’t short of ‘glitz and glamour’ as other celebrities attended the evening including Olympic gymnast Rhys McClenaghan, Superbike World Champion Jonathan Rea, Miss Great Britain Eden McAllister and well-known presenters Cate Conway and Denise Watson who also stepped out to celebrate at the venue.

“The difficulty in choosing just one deserved winner seems to become greater every year and that speaks volumes on just how high the standard is across the province. Every single category was bursting with worthy nominees,” said Ulster Tatler editor Chris Sherry.

“I want to extend huge congratulations to the winners from each category and all those shortlisted, who should all be extremely proud of what they have achieved within their businesses throughout the last year. I also want to personally thank everyone for their support.

“This year we are celebrating the fourteenth year of the Ulster Tatler Awards and the event was a complete sell-out in a stunning new venue so really we couldn’t have asked for more. The night was a massive success,” added Chris.

“We are also very touched to support the Stephen Clements Foundation on the evening, and we’re especially thankful that his close friend Cate Conway could join us here tonight. Envelopes were placed on tables for donations towards the Stephen Clements Foundation and a draw took place from all the names collected, with the lucky winner winning an overnight stay in the Fitzwilliam Hotel for two.” Chris concluded.