Council representatives in Brussels to prepare for Brexit 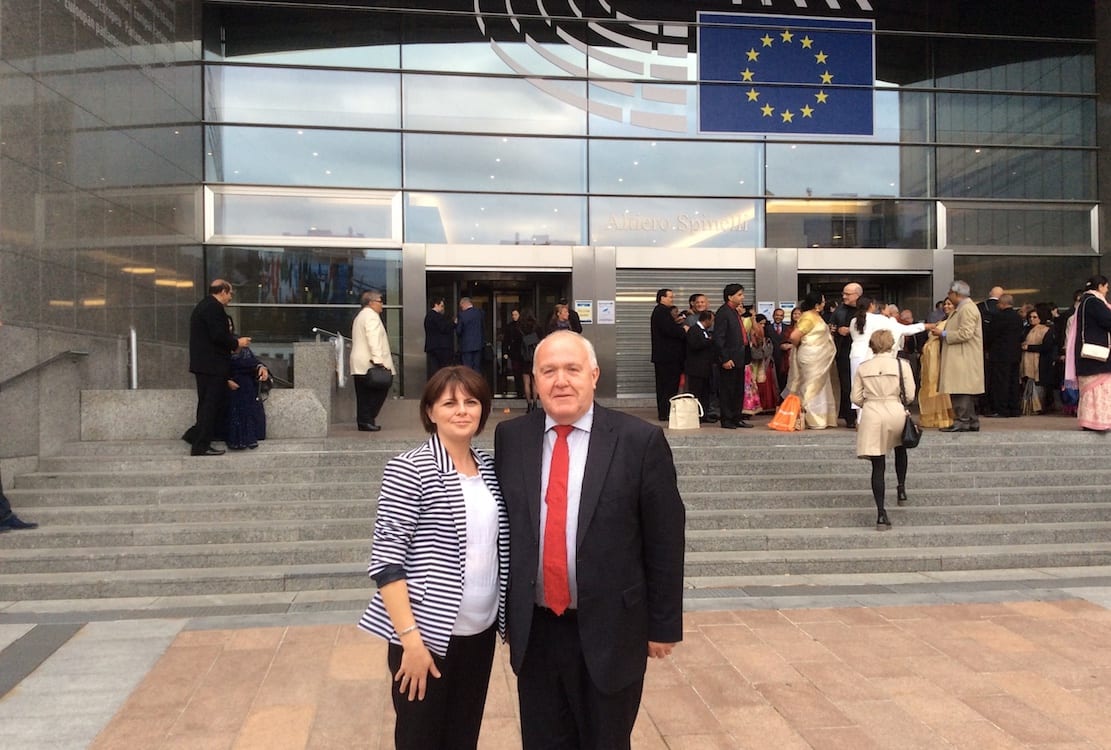 Since the results of the United Kingdom European Union membership referendum was announced in June 2016 extensive discussions have been taking place across the entire island of Ireland as to how the decision to leave the EU will affect the lives of those on both sides of the border.

Councils along the border area are playing their part in shaping the future with the publication of a research report outlining the potential opportunities and challenges for the border region.

The Ulster University Economic Policy Centre was appointed to undertake the study which is titled ‘Brexit and the Border Corridor on the Island of Ireland: Risks, Opportunities and Issues to Consider‘.

East Border Region facilitated the research and the coordination between the individual local authorities along the border corridor.

Representing the Armagh City, Banbridge and Craigavon Borough at the launch of the report which took place at the Northern Ireland Executive Office in Brussels on the Wednesday, October 11 were Chair of the Strategy and Community Planning Committee, Councillor Seamus Doyle, Vice Chair, Councillor Julie Flaherty and Roger Wilson, Chief Executive of Armagh City, Banbridge and Craigavon Borough Council.

Speaking at the launch Councillor Doyle commented: “As the Brexit negotiations continue the Border Corridor local authorities, elected members and officials, are committed to lobby and advocate for the needs of our region on an ongoing basis.

“These needs will continue to be reflected at the highest levels in government, in Northern Ireland, Ireland, London and Brussels.

“We anticipate that joint work between the local authorities will consolidate over the next few years as clarity emerges on the actual shape of Brexit.”

The report, ‘Brexit and the Border Corridor on the Island of Ireland: Risks, Opportunities and Issues to Consider’ can be viewed and downloaded from www.armaghbanbridgecraigavon.gov.uk and comments forwarded to admin@eastborderregion.com

Byrne said: “I was delighted to be given the opportunity to join my council colleagues as Chairperson of ERT on a trip to Brussels to deliver this important document. ‘Brexit and the Border Corridor’ is a collaboration between Council Areas North and South including our own which seeks to highlight the risks, opportunities and issues we need to consider following Brexit.

“Our group was joined by 11 different Council Areas that lie along the border and together we delivered a strong and very clear message that the Border Corridor will be severely impacted by Brexit.

“During a packed itinerary of meetings, I pressed officials which included a group of MEPs, Phil Hogan’s Cabinet and a steering group set up specifically to deal with Brexit on the importance of special status for the North.

“Our economies North and South are heavily dependent on EU subsidies and this is apparent in our agricultural sector where there is an 87% reliance on single farm payments specifically among border farms.

“This is something which must be retained in any future deal and would have to include the option to remain in the single market and the customs union.”

He added: “During our meetings I made a direct call to Unionist representatives present to ensure that they fight for the best possible deal especially in relation to this.

“There is substantial evidence now available particularly in the document we presented to the EU Parliament which states that leaving the single market and the customs union would be detrimental to the North. This would be a dangerous move considering the ever-changing global political landscape including an inward-looking US under Trump’s Presidency.

“Despite our clear differences on Brexit, I was encouraged that Unionist representatives responded positively to my call to work together in the best interests of the people of Ireland, North and South to ensure no trade barriers are erected here. From my perspective, this was a positive engagement with key decision makers at the EU Parliament, our concerns were listened to and a commitment was given to work to minimise the impact of Brexit on the border corridor.”

Councillor Roisin Mulgrew, Chairperson of NMD COuncil said: “Councils from both sides of the border have met regularly to discuss the impact of the UK leaving the EU on  Border Corridor.

“We have been working closely and today in Brussels we launched our policy document. We will continue to work together to ensure our common concerns are highlighted and addressed.”

“Well done all involved with the Border Communities Against Brexit Campaign, a deserved recognition of the huge work this Group has done to highlight the impact of Brexit, thus ensuring that the communities concerns continue to be heard”.