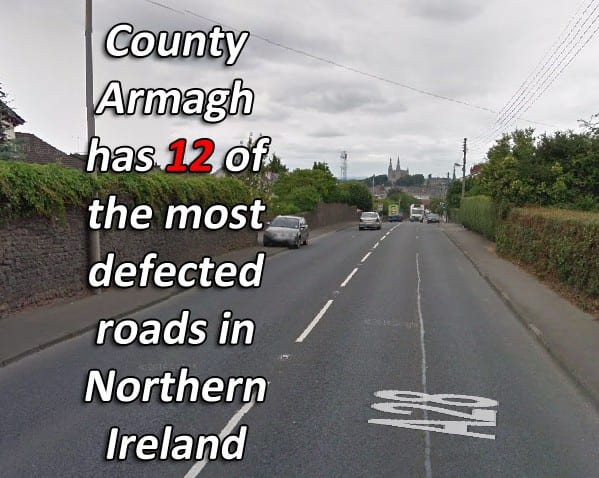 Armagh has some of the worst roads in Northern Ireland, it has been revealed.

Second on the list with 244 surface defects is the Annvale Road in Keady, coming in behind the worst affected Glenside Road in Castlereagh.

The Artasooley Road in Blackwatertown also makes the top five with the Gosford Road the third worst road in the county.

And despite major works over the last number of years, the Newry Road makes an appearance at number 19 on the list of most defected road in the country with no fewer than 182 defects.

Following the release of the official data by Roads Service, SDLP Westminster candidate Justin McNulty has called for an urgent injection of cash to resolve the issues.

“Every motorist or resident I have met over recent weeks on the doorsteps has been raising the issue about the state of our roads, particularly in rural areas,” said Mr McNulty.

“They are constantly highlighting the number of marked potholes which never actually get repaired and complain of the damage to their cars.” The 50 most defected roads in Northern ireland

He added: “Despite having two successive Roads Ministers over the last eight years in Conor Murphy and Danny Kennedy, Newry and Armagh tops the list for the worst roads in the North.

“In my view, this doesn’t tell the story enough, the state of our roads are abysmal and it’s time we seen serious action from the Minister and his officials to resolve the issue.

“The Annvale Road in Keady comes in as the second worst road in Northern Ireland, followed by other roads such as the Dundalk Road in Crossmaglen.  Other roads in Clady, Tullysaran, Markethill and on the outskirts of Armagh and Newry cities. They only conclusion I can make is that this area has been neglected for years.  This cannot continue!”

He continued: “I appreciate the great work our roads service personnel locally are doing however their hands are tied behind their back.

“However our roads are dreadful at the minute but I fear things are going to get so much worse. Roads Service / Transport NI have been sending out some very alarming messages over recent weeks and months, I fear there is much worse news to come. A constant message I am hearing is that Roads Service seem to use more yellow paint making out roads than tar in repairing them.

“The Roads Minister needs to give assurances that things will improve. Local residents are right to highlight were the problems are. Lack of investment in roads maintenance is clear to be seen and action must be taken as soon as possible to rectify this dreadful situation.”