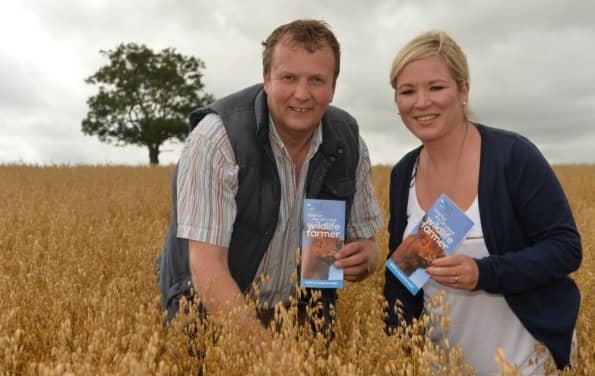 Agriculture and Rural Development Minister Michelle O’Neill MLA has paid a visit to the orchard county to show her support for a local man who is in the running to be crowned the UK’s most wildlife friendly farmer.

Tim McClelland is representing Northern Ireland in the RSPB’s Nature of Farming Award, which recognises the extra mile some farmers go to give nature a home on their land. He is competing with seven other farmers from England, Scotland and Wales and needs public votes to clinch the coveted title.

Tim was delighted to welcome Ms O’Neill to his 270 acre arable farm in Tandragee and explained to her how a large, commercially successful farm can support a diverse range of birds and wildlife.

Every year Tim sows wild bird cover and retains cereal stubbles after the harvest to provide seed-eating birds with food during the winter.

He has also planted almost 500 metres of new hedgerow that will create nesting habitat for farmland birds like the bullfinch.

As a result of his efforts, he attracts species like the yellowhammer, tree sparrow and the linnet, and the Nature of Farming Award judges were also treated to the rare sight of a pair of lapwing!

A vast array of arable wildflowers on the farm are a real haven for insects and the land also supports other wildlife, including mammals like the Irish hare and bat species.

Of Tim’s 220 acres of grain 79 acres are Conservation Grade Oats and the cereal is transported just two miles to the local ‘Speedicook’ factory, ensuring that the ‘food miles’ are short and the carbon footprint is kept to a minimum.

As an Arable and Environmental Focus Farmer, Tim also hosts farm visits and has held Open Farm events to highlight the work of arable farmers across the country.

Tim says he is able to “offer a meaningful benefit to wildlife without losing profit” and therefore considers it a “win-win situation”.

“I think it’s important that we as farmers show the public that we are about more than just producing food – that we can produce food at the same time as doing positive things for the environment and protecting the countryside for the next generation,” he said.

“The beauty of an arable farm like mine is that it lends itself to implementing these small but important changes, such as sowing wild bird cover in a shaded area which isn’t as productive for growing crops.

“The increase in workload is minimal but the returns are wonderful. I’m not a top notch ornithologist by any means but it lovely to see such a variety of birds and wildlife find a home on my farm and the kids really get a buzz out of it too!”

Following the tour of Tim’s arable farm, the Minister said: “I am delighted that Tim McClelland is a finalist in this year’s Nature of Farming Award. Tim has shown a commitment to nature and wildlife on his farmland through his participation in the Countryside Management Scheme. I know he has a special interest in providing habitats for farmland birds and it is encouraging to know that species like yellowhammer and tree sparrow are thriving on his farm.

“Agri-environment schemes are both environmentally and financially important and it is deserving that local effort has been acknowledged in this competition. Tim is to be congratulated on reaching the final. I wish him all the best with the competition and hope that Tim’s success will inspire others to make a difference to wildlife and nature.”

Hayley Sherwin from RSPB Northern Ireland added: “Tim is an excellent example of how farmers can make homes for nature on their land and how commercial business and wildlife can co-exist.

“He really deserves to win this year’s Nature of Farming Award but he needs the public’s help to beat seven other farmers from across the UK.

“We are urging people to recognise all the good work he is doing for nature and vote for him to win the 2013 title.”

Votes can be cast at www.rspb.org.uk/farmvote until 31 August.