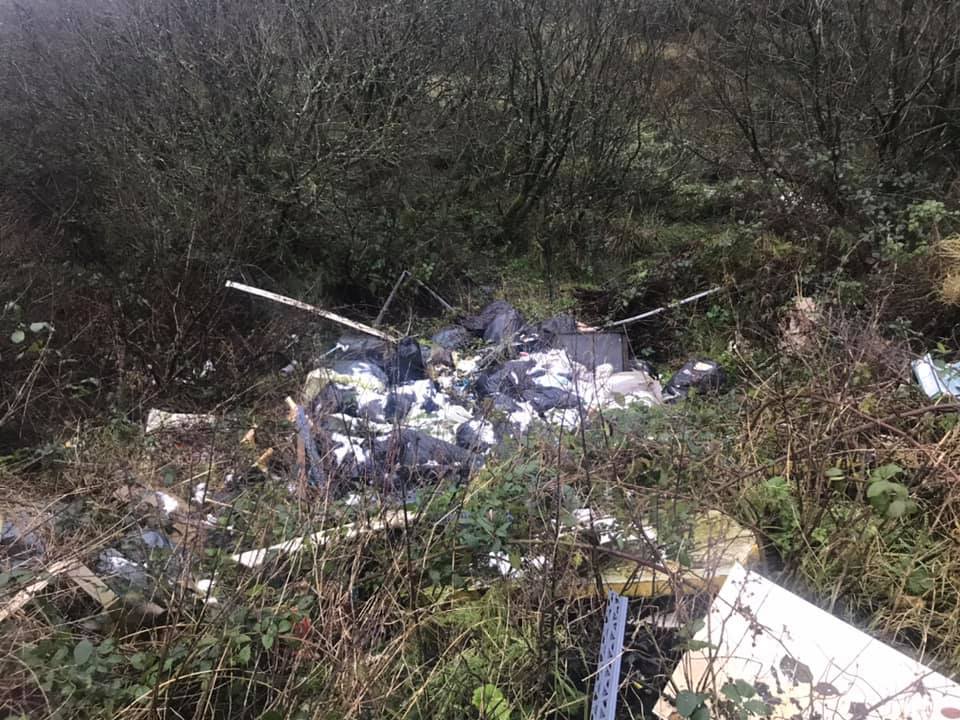 Armagh City, Banbridge and Craigavon Borough Council is to call on the Northern Ireland Environment Agency (NIEA) to “come out of its ivory tower” and deal with fly tipping issues.

Following a debate on the matter at December’s monthly council meeting the decision was taken to write to the NIEA to ask it what role it will play in the removal of waste that has been illegally disposed of going forward.

The proposal to do so was put forward by DUP Alderman, Sydney Anderson and seconded by Council’s Lord Mayor, Councillor Kevin Savage.

Fly tipping is the illegal disposal of household, industrial, commercial or other controlled waste without a waste management licence.

It is not the same as littering, fly tipping is larger in scale and usually considered to be a premeditated, wilful act.

The matter was first raised by SDLP councillor Thomas Larkham who asked if it would be possible to set up a live reporting mechanism for fly tipping hotspots.

The Lord Mayor informed Councillor Larkham that his question was “drifting” into an area best left to Council’s environmental services committee.

Councillor Larkham said he was not a member of that committee but as an elected representative has, “the right to ask the question”.

In response the Lord Mayor said, “I have given you an answer. I am not trying to stifle debate but you are asking a question that needs to be addressed by the committee.

“I am sure officers will will bring the matter to the next meeting of the environmental services committee.”

Alderman Anderson said he was not a member of the environmental services committee but said he wished to be heard in relation to fly tipping issues.

“This issue has been ongoing for some time,” said Alderman Anderson. “I have been working with the officers and our staff and I have two issues.

“The first is what happens to items dumped onto private property and the second is about a fly tipping incident on the Derrykeeran Road.

“We have been trying to get NIEA out to get something done but at present we don’t seem to be making much headway. I would like to know if this new protocol will be any better than what we already have.

“I see little to no improvement in issues relating to fly tipping and think Council needs to push the NIEA to come out of its ivory tower and deal with these issues and ensure we, as a council, don’t have to bear the cost.

“I propose we write to the agency to ask them what they are going to do about these issues.”

The Lord Mayor seconded this proposal stating: “Every councillor has experienced difficulty with fly tipping so I will second this proposal.”

Council’s head of environmental health, Gillian Topping told members the new protocol has been the subject of some debate.

“Council has not agreed to areas of the new protocol concerning the role and responsibilities of both the council and the NIEA,” said Ms Topping.

“The NIEA would like the council to take more responsibility. That is proposed without any additional resources being supplied.

“Council has not agreed to that and we would wish to see some movement from the department before we enter into any protocol.”

SDLP Councillor Eamonn McNeill said he too had issues with fly tipping and the NIEA’s response to such matters and urged Council to put pressure on the agency to act.

Speaking about the new protocol, a spokesperson for the Department of Agriculture, Environment and Rural Affairs said: “Both local councils and the Department (NIEA) currently have powers to deal with the unauthorised deposit and disposal of waste under existing legislation.

“However, to provide clarity a fly-tipping protocol was introduced circa 2010/11 whereby local district councils and NIEA agreed shared responsibilities for fly-tipping on a practical operating level.

“Under that protocol, NIEA took responsibility for the investigation and removal of all volumes of hazardous wastes such as asbestos and any other fly-tipped waste over 20m³ in volume, with local councils taking responsibility for all other deposits under 20m3.

“The protocol was agreed with 21 of the then 26 councils. However, following the reform of local government the NIEA and the current 11 district councils have agreed to update that protocol.

“As with the original protocol, the updated version places no additional responsibilities in addressing fly-tipped waste upon district councils than under current legislation.

“Further, In support of the above, the Department is considering commencement of additional legislation which will provide stronger enforcement powers to both the NIEA and district councils to pursue offenders.

“This legislation, when commenced, will place no additional statutory burden on a district council (or the NIEA) as the powers will be discretionary and it will be for each individual council to determine how they may wish to use such powers.”

The spokesperson also confirmed that following reports to the NIEA on December 17 concerning the alleged disposal of baled silage on the Derrykeeran Road a site inspection is planned for Friday, January 8.

“Following this inspection, the NIEA will determine if any further action is required,” said the spokesperson.