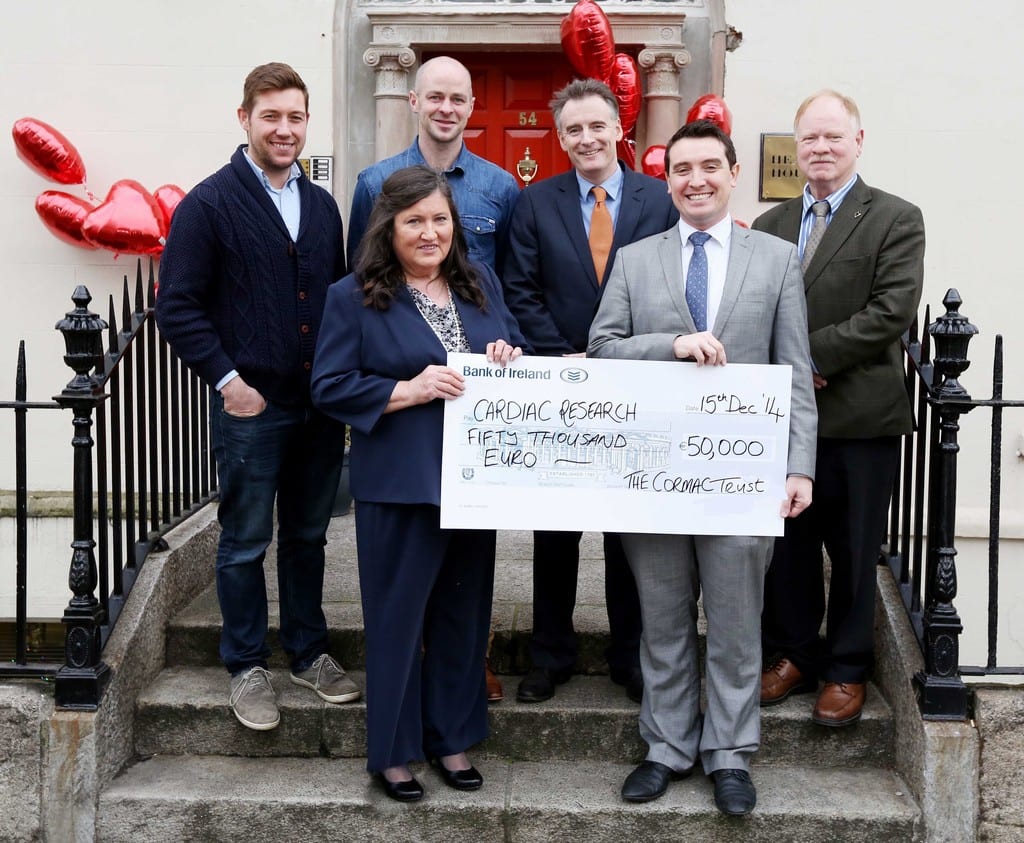 A huge well done to all involved with the Cormac Trust, which has presented a cheque for a staggering €50,000 to the Mater Hospital Family Heart Screening Clinic in Dublin.

The Trust – named after the late Tyrone GAA star and St Catherine’s College, Armagh teacher – made the magnificent donation at the hospital celebrated the screening of the 1000th family.

The money will go towards a new groundbreaking research programme in genetics.

This research, led by Dr Stephen Tuohy, will be one of Europe’s leading facilities investigating the incidence and causes of – and treatments for – SADS, (Sudden Arrhythmic Death Syndrome), which is a group of mainly genetic diseases which can cause sudden death in normal healthy young adults.

And in order to screen and treat families suffering from SADS, the Mater Family Heart Screening Clinic was set up in 2007.

Accompanying the McAnallen family, who presented the cheque to Dr Joe Galvin, founder and Director of the Clinic, and Dr Stephen Tuohy, were two young men who both state that their lives being saved is a testimony to the awareness created during these years by the work of the Cormac Trust, and also by the Family Heart Screening Clinic.

Kevin McCloy, from Co Derry, and Seaghan Kearney, from Dublin, who were both kept alive by CPR and the use of nearby defibrillators, have been outspoken in their praise and acknowledgement that the awareness of SADS, and the availability of defibrillators, have both seen a huge increase in recent years.

In thanking the McAnallen family for “raising awareness to prevent death from SADS”, Kevin McCloy said: “Without doubt, your commitment to the Cormac Trust has spared my life.”

Seaghan Kearney has also spoken very generously in recent years about the Cormac Trust, and also the work of the Mater Hospital and its Family Heart Clinic, which has now screened over 6000 people, which is extremely important for affected families, but has not received any government funding.

The research which is now underway is now a vital new development in screening, the identification of the genes responsible for SADS, and by identifying as many new genes as possible,  and with links to a major centre in Spain, in some cases the complete human genome, many as yet unknown genes will be discovered.

“It identifies the culprit for a family member’s condition and allows us to identify other family members at risk, even if they don’t have evidence of the condition.

“It also allows us to identify family members who don’t have the mutation and need no further follow-up.”

“A concept worth getting across is that in medicine we treat everybody as if they were the same,” he said.

“We need genetics ‘because everyone is different’, different because of their DNA code. Only ‘knowing the code’ allows us to personalise their treatment.

“This is the beginning of the era of personalised medicine. Nowhere does your treatment need to be personalised more than when you have a family history of premature sudden cardiac death.”

Keep up to date with the fantastic work of the Cormac McAnallen Trust by visiting www.thecormactrust.com/