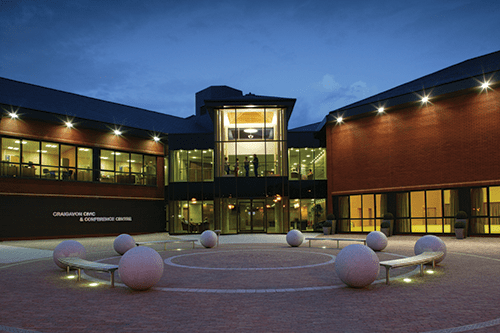 Armagh Banbridge and Craigavon Council is in the process of drawing up a select list of contractors for a major refurbishment of its new Council Chamber in Craigavon, Armagh I can exclusively reveal.

The redevelopment at the Craigavon Civic Centre chamber, the only of the three council seats large enough to accommodate all 41 new councillors, is being prepared ahead of the new council taking over full powers on April 1 next year.

The successful main contractor will be responsible for building finishes and an interior fit out, while a specialist audio and visual contractor will also be taken on to prepare the new chamber for business.

Prequalification questionnaires have been posted online for interested parties and a tight deadline has been set.

Invitations to submit have been requested by the new ABC Council chief executive Roger Wilson and are due to be returned before midday on Friday, October 24.

The Civic Centre, at Lakeview Road in Craigavon, will be the main headquarters for the ABC Council.

Armagh will retain civic responsibilities, while planning functions, when these are officially handed tansferred from the Department of Environment, will be assumed in Banbridge.

The Council Chamber in Armagh, indeed the Palace in general, also recently underwent a major works programme, but that was more out of necessity due to structural issues.

The refurbishment of the Craigavon venue is just the latest element of a complex jigsaw of issues to be dealt with to pave the way for the new ‘super-council’.

Just two weeks ago we reported agreement on the ABC Council capital budget, with Armagh to be the major benefactor from the £158 million earmarked over the next three years.

Various projects are currently at different stages of development across the books of the three current councils and work will have to be carried out by the new ABC Council over the coming months and years to consider the feasibility of all these moving forward.

Armagh could benefit from approximately £76m of that pot with £26m estimated for the Armagh Gaol project, which includes a four-star hotel. A large portion of that project is also being privately funded and financial issues there are expected to be resolved shortly.

Major improvement masterplans for both Richhill and Keady also feature, at an estimated cost of £2.3m, and these were rubberstamped at Armagh Council’s public services scrutiny committee last Monday night.

Another main issue requiring attention at the moment is the name of the new ‘super-council’, one of 11 such bodies to take over from the 26 local councils next year during the biggest shake-up in local government administration here in 40 years.

There is also currently dissent among the ranks over the official new name.

Armagh, given the fact that it holds the civic responsibility and was awarded the honour of a Lord Mayorlty in recent years, is expected to feature prominently.

But it is not yet known if a reference to ‘Bann’ will be sufficient to cover the Craigavon and Banbridge roles.

There are reports of suggested name like ‘Armagh and Bann’ and ‘Armagh and Down’ doing the rounds. In fact, it has been suggested too to change from ABC to ABCD – becoming Armagh, Banbridge, Craigavon and Down Council.

But whatever is favoured, a decision is expected to be taken within the next number of weeks, certainly before the New Year at the latest, to allow for official stationery and other paraphernalia to be prepared ahead of the new ‘super-council’ coming into effect.

The first meeting of Armagh, Banbridge and Craigavon Council took place in June at the Craigavon Civic Centre, so it was always widely tipped to emerge as the seat for ABC, following the local government elections in May past.

A total of 41 councillors will represent the ABC area, the biggest council area outside Belfast, and it will continue to work in shadow form until next April.

Before then, newly-elected councillors and staff in the ABC ‘super-council’ are also to receive online training in the form of a ‘virtual tour’, as Armagh I revealed last July.

A company was to be employed to develop an online resource which encapsulates all of the assets of the new region and was expected to include a mixture of satellite navigation style graphics and short video clips of the major features.

The product – according to the specifications of the tender documentation put out in the summer – was to be designed to include provision for updating to cover additional material and the removal of assets periodically, expected every two to three years.

The purpose was to increase familiarisation with the new council region as an aid to induction of new councillors and employees.

The contract needs to be completed no later than January 2015 – three full months ahead of the change over – and will be another one of the many threads being pulled together to facilitate as smooth a take-over as possible come April.