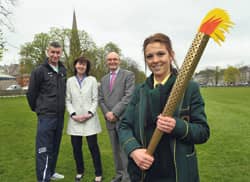 Lord Mayor of Armagh City and District, Robert Turner, will host this year’s Lord Mayor’s Awards ceremony on Wednesday 18thJune in Armagh City Hotel, where the winners will be announced.

Lord Mayor Turner said: “I hope people from all walks of life and backgrounds get involved this year: “Over the past eleven months as Lord Mayor of Armagh City and District, I’ve had the privilege of meeting hundreds of local people. The one thing I’ve been consistently impressed with is the sheer number of people who give their own time and energy to help others without seeking any real reward.

“The Lord Mayor’s Awards are all about giving these individuals the credit they deserve and celebrating the work they do. If there’s someone you know who has supported community activities, created job opportunities or promoted environmental, educational, sporting or cultural projects in your community please put their names forward for the Lord Mayor’s Awards.”

Mary McGuigan picked up the Volunteer of the Year Award for the significant role she played in community life in the district at last year’s ceremony.

Leah Coade (pictured) was awarded the Youth Cup for her contribution to community life in Armagh.

Closing date for nominations is Tuesday 27th May 2014 at 12 noon, with entry rules and nomination forms available by contacting the Lord Mayor’s Secretary, Cara Toner on (028 3752 9633) or by emailing cara.toner@armagh.gov.uk

You can submit your nomination online by clicking here.