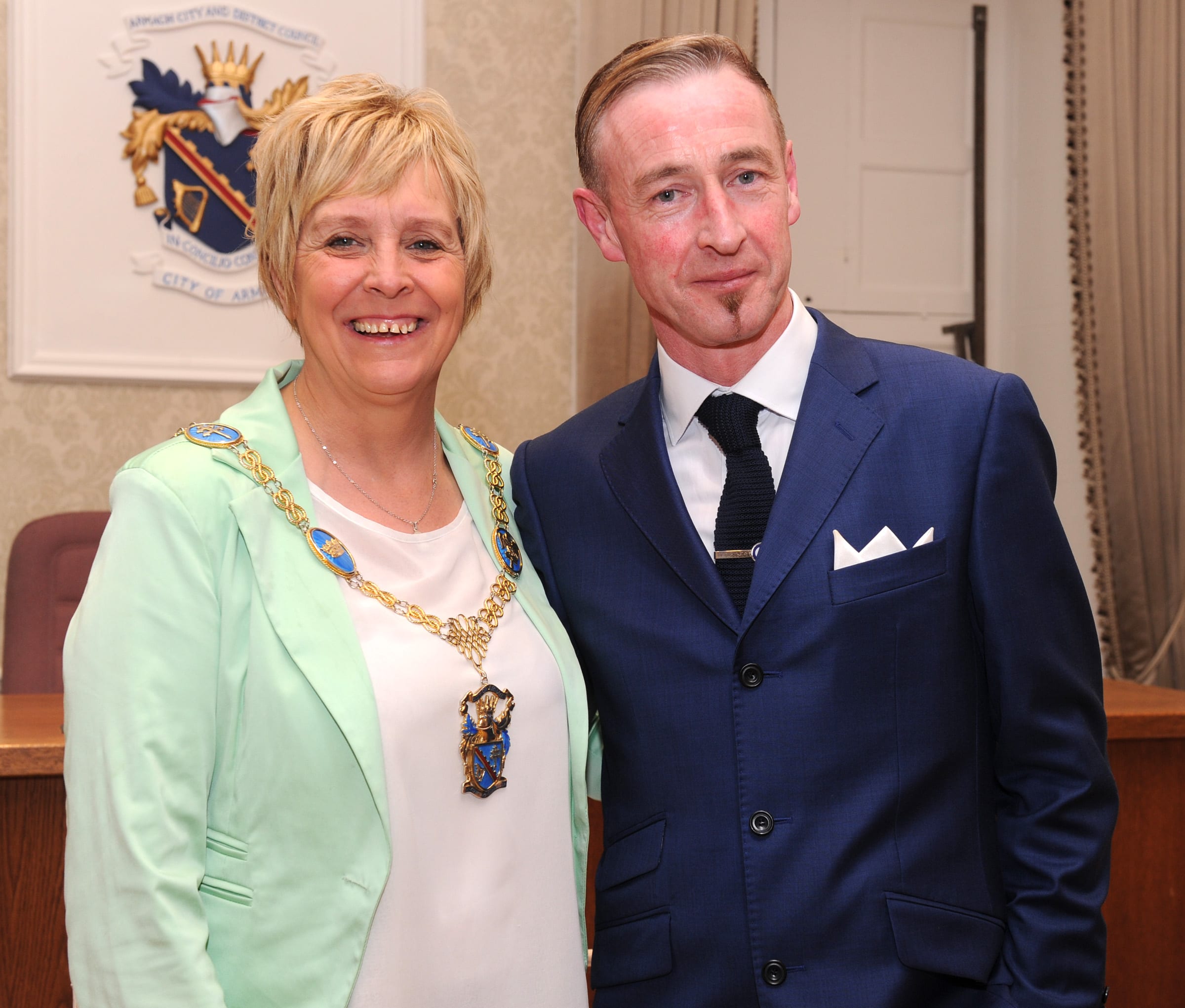 An Armagh man, who has raised tens of thousands of pounds for a whole host of charities over the past three decades, has had a special reception held in his honour.

Mark McSherry, known to many as ‘The Barber’, at English Street, has also been recognised for his contribution to community life in the city and district.

Mark was “humbled” when a reception was held to mark his years of selflessness and devotion to others, at the Palace in Armagh on Saturday night. Outgoing Lord Mayor Cathy Rafferty paid glowing tributes to him on what was an historic occasion in more ways than one – it marks 30 years since Mark’s first fundraiser and was also the last ever Mayoral reception hosted in the city before Armagh City and District Council officially came to an end.

Mark, who was presented with a beautiful Tara brooch to mark the last ever Mayoral function or council engagement, is no stranger to the people of Armagh and his wonderful efforts have done so much good for so many people.

His annual Boxing Day Party Night is now something of legend and the number of beneficiaries over the years has been truly amazing.

His first steps on his decades-long charity crusade began in 1985 when he, like millions of others, was motivated to do something by the devastating scenes of famine in Ethiopia.

Seven days after a global audience of billions tuned in to watch dual star-studded concerts in London and Philadelphia, on July 13, 1985, and Mark hosted his own fundraiser.

With tickets costing just £1.50, the disco night in the Paradiso Lounge was a huge success and that gave the Armagh man the charity bug. Mark continued to do “bits and pieces” – his own words – over the next while.

But it was not until his good friend Francy Hanratty sadly passed away in March 1999 that he got stuck in in earnest.

Francy, a renowned painter and decorator by trade and an influential figure in local soccer circles, had suffered a heart attack.

Mark then was inspired to join up with the Chest, Heart and Stroke Support Group in Armagh and pledged to do his bit – which, as it happens, was more than just a bit!

Like Francy, the Barber was greatly involved in the local soccer scene, being the treasurer for years of Armagh Celtic FC.

It was natural, therefore, that charity matches would feature and, again, local teams went above and beyond in showing their support – but the ultimate winner of every event was always the charity! From there the fundraising took the form of various entertainment nights throughout the year; Easter, summer, Hallowe’en and charity band and discos, these became the norm and provided great craic but, above all, great amounts for charitable causes.

Various venues were used, but mainly the Charlemont Hotel at English Street and the Market Place Theatre, with owners, management and staff of both hugely supportive of the efforts.

Without doubt, Mark’s biggest success to date has been the annual Boxing Day Party Night, which he admits he has been doing “too many years to remember”. The event provided fantastic sums over the years for NI Chest, Heart and Stroke.

But, about 15 years ago, Mark decided to begin donating proceeds to other charities too.

And the list of grateful recipients has been seemingly endless.

Among those to benefit – and by no means all – have been the Longstone Riding for the Disabled, Multiple Sclerosis, the Baby Unit at Craigavon Area Hospital, TINYLIFE, Cystic Fibrosis, the Southern Area Hospice in Newry, Armagh Friends Of Africa, Cancer Reseach, and a fundraiser for a six-year-old local girl battling cancer. Mark has also been deeply involved in community work and has received a top award from the Scouting movement, which is only presented sparingly, and he is an instrumental volunteer with the local Order of Malta.

There seems to be no end to his fundraising ideas and efforts and he shows no signs of letting up anytime soon, with work behind the scenes for future events. While he does what he does without expectation of reward, Mark’s family and friends – and the many charities and causes he has supported – will be delighted he has been recognised at the Palace.

Mark, a man of few words when it comes to such things, told Armagh I: “I was humbled by Saturday night’s reception.

“Back in 1985 when I started, I didn’t expect that, 30 years later, I would be standing at the Palace being honoured in this way.”

All those who know you Mark, and all of those whom you’ve supported, will be delighted to see you honoured.

And Armagh I would like to join in offering our congratulations and saying a huge ‘thank-you’ to you for going above and beyond and making a real difference in so many people’s lives!

Pictures, from top: Mark pictured with outgoing Armagh Lord Mayor Cathy Rafferty, at the reception held in his honour; a ticket for the first Live Aid fundraising disco in 1985; the Tara brooch presented by the Lord Mayor; a younger Mark when he began his fundraising efforts in the 80s; the presentation of cheques, proceeds of the 2014 Boxing Day Party Night, which were presented in January; and Mark receiving his Scouting award at the Den.