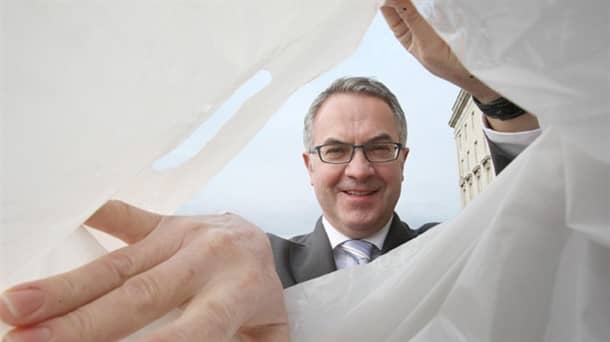 SHOPPERS will now have to pay for plastic carrier bags after the introduction of a new tax today.

The Single Use Carrier Bag Levy means consumers will pay at least 5 pence per bag as the Assembly try to slash the estimated 250 million single use bags used here every year by up to 80%.

Environment Minister Alex Attwood insisted the move is necessary to reduce the 30,000 carrier bags used in Northern Ireland every hour and the damage this can cause to the environment.

“People tell me they are concerned about climate change and want to find ways to make personal, family and local contributions to addressing the threat. The levy is precisely this.,” he said.

“Shoppers can completely avoid paying the levy by bringing their own bags when shopping.

“Whether it’s a ‘bag for life’, a canvas bag, or just an ordinary plastic carrier bag, it all helps the environment by using less raw materials, reducing carbon emissions and reducing air and water pollution.

“This is what the levy is all about.”

The Republic of Ireland has had a similar tax in place for the last decade, whilst Wales became the first UK nation to implement the levy in 2011.

Newry and Armagh MLA Cathal Boylan has welcomed the introduction of the tax and says that it will create a lasting legacy of environmental awareness for future generations.

“My party colleague Daithí McKay introduced a motion to the Assembly calling on action to reduce the number of plastic bags that are in circulation,”   said the Sinn Féin Environmental spokesperson.

“I am delighted that we have now instigated a scheme that will reduce the number of single use bags going to landfill.

“The vast majority of these bags are non bio degradable and continuing to use over 30,000 bags an hour is unsustainable and creating an environmental nightmare for future generations.

“By reducing the number of bags in use we can create an environmental legacy and educate our young people of the importance of being environmentally aware.”

The tax also applies to bags made from paper, plant-based material, or natural starch.

Shoppers are being encouraged to bring their own bags to avoid having to pay the charge.