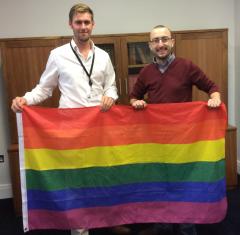 A notice of motion backing equal marriage was passed on a resounding ‘yes’ vote at a meeting of Newry, Mourne and Down District Council last night (Monday).

And now those who sponsored the motion are calling on the Northern Ireland Assembly to do likewise.

Independent Newry City Councillor Kevin McAteer has welcomed the result, which was brought by himself and the Alliance Party’s Patrick Brown (both pictured).

The motion read: “That this Council believes that all couples in Newry, Mourne and Down, and across Northern Ireland, regardless of sexual orientation, should have the right to a civil marriage; that the rights of religious institutions to define, observe and practice marriage within their beliefs should be given legal protection; that faith groups which wish to marry same sex couples should not be prevented by the state from doing so; that all married couples of the same sex should have the same legal entitlement to the protections, responsibilities, rights, obligations and benefits afforded by the legal institution of marriage; and calls on the Minister of Finance and Personnel to introduce legislation to extend civil marriage provisions to same sex couples.”

The motion passed by 27 votes, with three abstentions and eight against.

Now Councillor McAteer has called on the Assembly to follow suit.

He said: “Councillor Brown and I are absolutely delighted that this motion has passed and we hope that the momentum can continue into the assembly. We would both like to take the opportunity to thank the local rainbow clubs for their support and also to local union Unite for their never ending support on the issue.

“I would like to thank all the councillors who voted in favour of the motion. This to me is another step in the fight for equality; now that Newry Mourne and Down council has shown their support for equal marriage I hope the other councils will follow suit.

“Everyone deserves the right to marry the one they love regardless of sexual orientation. I can only hope that Stormont will eventually see sense and pass equal marriage.”

Also speaking on the issue Unite equality officer Damian McShane said: “We at Unite stand firm on Equality, Racism, Sectarianism and Sexism; we remain steadfast and will never conform to the parameters of an unjust society – everyone has the human right to love who they wish without state interference; this is 2015 not 1615.”