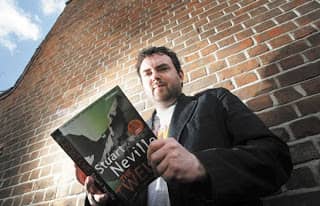 Presales on a big-screen adaptation of Stuart Neville’s revenge thriller ‘The Twelve’ – penned by CBS late-night talk show host Craig Ferguson and Ted Mulkerin – will begin at the European Film Market, according to The Hollywood Reporter.

UK-based sales and finance banner Ealing Metro will tout the taut thriller under the title of ‘Last Man Out’ after boarding it on the eve of the market in Berlin.

It details the story of a former IRA hitman who, released from prison after serving 20 years for murder, is haunted by the memory of his victims. He can find no peace until he takes revenge on their behalf.

But buyers will have to wait to see who will star opposite Brosnan, with casting now underway.

It is to be directed by Terry Loan, and produced by Ferguson, Steve Clark-Hall,  (Sherlock Holmes), Beau St Clair, (The Thomas Crown Affair), Rebecca Tucker and Jonathan Loughran, with filming scheduled to begin at the end of the year.

Stuart – a former student of the Royal School Armagh – enjoyed positive notices from the national press, with The Observer newspaper describing it as “unbearably tense, stomach-churningly frightening … a future classic of its time”.

The book has been printed in the USA by Soho Press under the title Ghosts of Belfast. It was also published in Japan, France and Spain.