Spotted a German man rolling around in a metal ball this week? Here’s why.. 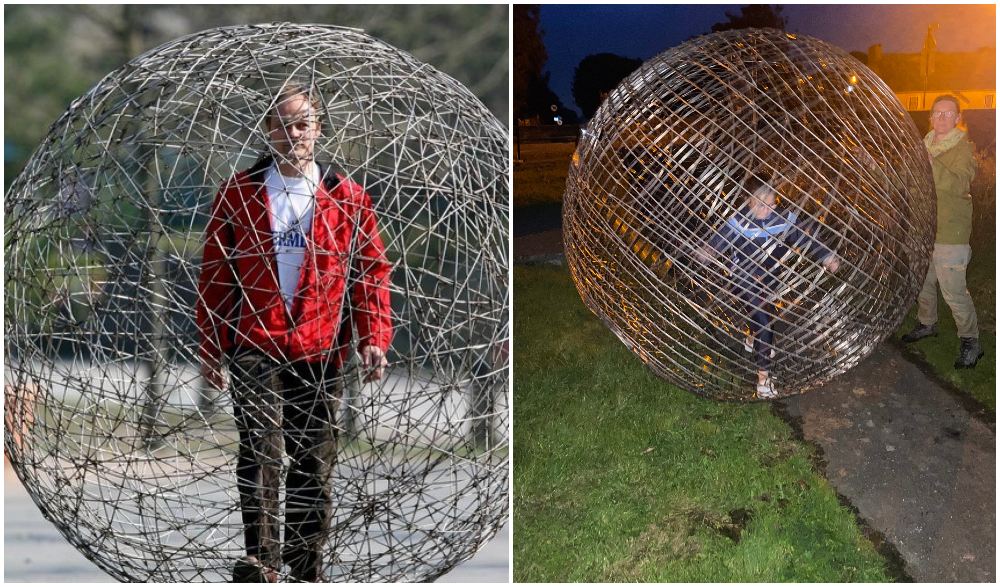 A German artist rolled – quite literally – into Co Armagh in a metal ball this week during what is a 1,500km journey to a climate change conference.

Arnd Drossel was taking in the sights, whilst contained in a 160kg steel ball, which he had welded together alongside his son.

Mr Drossel set off from his home in Paderborn, Germany, in July, with the goal of reaching the UN Climate Change Conference in Glasgow at the start of November.

The environmentalist is asking people to make one small promise to try and live in a more sustainable way. He is collecting promises on his website and will roll through 60 cities in total as part of his ‘My Promise Mother Earth Campaign’.

If you were about Newry this week you may have been shocked by the sight – but now you know why!

Mr Drossell stopped by St Paul’s High School, Bessbrook, where he encouraged pupils to ‘get the ball rolling’ in tackling climate change.

Students were even offered the opportunity to take the steel ball for a spin.

Another lucky person was 11-year-old Lucy Canavan (pictured right), from Poyntzpass, who also got in on the action as Mr Drossel made his way along the towpath to Scarva.

Speaking to Armagh I, Lucy’s mother Irene explained: “She had been out playing and I had gone to get her as it was getting dark. One of the mummies had been out walking and thought she was seeing things as this big ball was coming up the towpath.

“That’s how we came across them. They were a lovely couple from Germany and they let the kids have a wee go in the ball.”

Irene, who is a classroom assistant at St Joseph and St James’s Primary School in Poyntzpass, said she was surprised to find that some of the senior students were well aware of Mr Drossel’s journey.

“I didn’t realise, because I don’t work with P7 classes,” she said. “But I was showing them photos of my Lucy in the ball and they were saying they had written letters to him.”