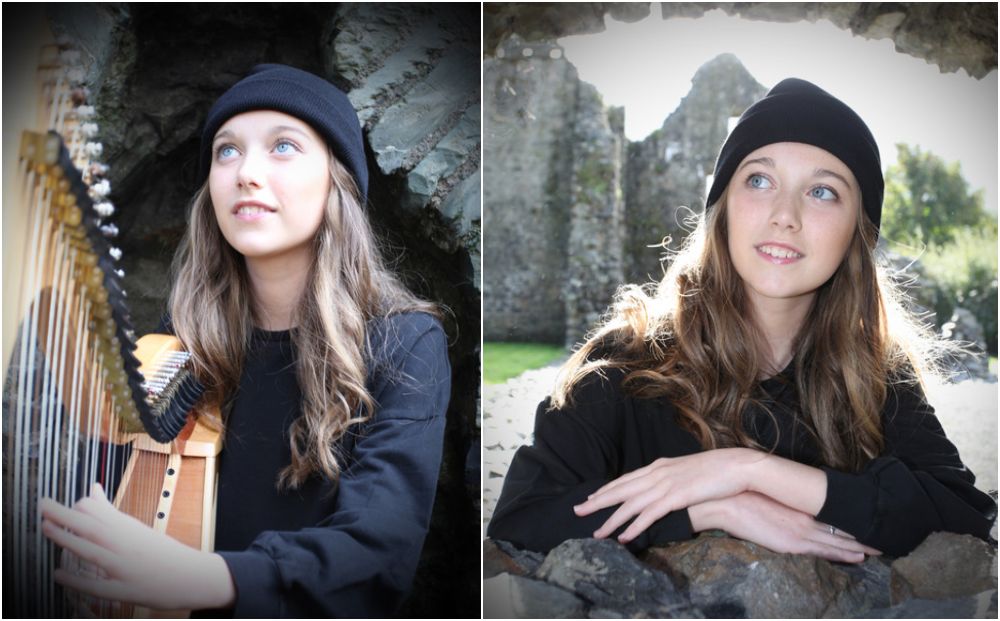 While most of us were munching our way through lockdown, or binging on the Tiger King, Niamh Noade was busy making her mark on the music world.

Around this time last year, the 13-year-old Lislea teenager was wowing the judges at TeenStar UK Singing competition, as the only harpist ever to compete in the online show and the only Irish contestant out of the 1000 plus hopefuls.

Niamh finished fourth, performing a show-stopping rendition of John Lennon’s ‘Imagine’ in the final, and as the Showcase winner, the talented St Paul’s Bessbrook pupil won the opportunity to record with professionals at AudioHaus Recording Studio in Wembley.

Niamh got writing and playing and with the help of her harp teacher Dearbhla Bennett, came up with two originals songs, ‘Missing You,’ and ‘Friendships.”

She managed to get in a bit of shopping in London but the hard-working singer and musician was focussed on creating something special – and that she did.

With the help of Re-Gen Waste Limited, who sponsored the resulting CD, Niamh and her family decided to do something charitable with the fruits of her labour, and given her age Niamh wanted to donate the proceeds raised from the sale of
her CD to a children’s charity.

With increasing waiting lists for children with cancer in the news, The Cancer Fund for Children, became the chosen charity.

The CD is being launched on Saturday November 20 at a Classical Cabaret event in Lislea Community Centre.

Niamh is also setting up a JustGiving Page for donations to the charity and after that she has a busy schedule in the run-up to Christmas, including performances at the Quays Shopping Centre, the Canal Court, the Carrickdale – while also starring as Mary Poppins on the stage.

For this week’s podcast, Niamh and her mum Deirdre tell us all about her musical journey since she and her younger siblings Malachy and Molly got involved in traditional music through the Traditional Arts Partnership in Mullaghbawn.

Niamh has a lot of people to thank for her success so far, but most of it comes from her sweet nature, extraordinary talent and clear focus on her future in some form on the stage, More information and details on the CD and donating to the Cancer Fund
for Children can be found at Niamh Noade Music Facebook Page.