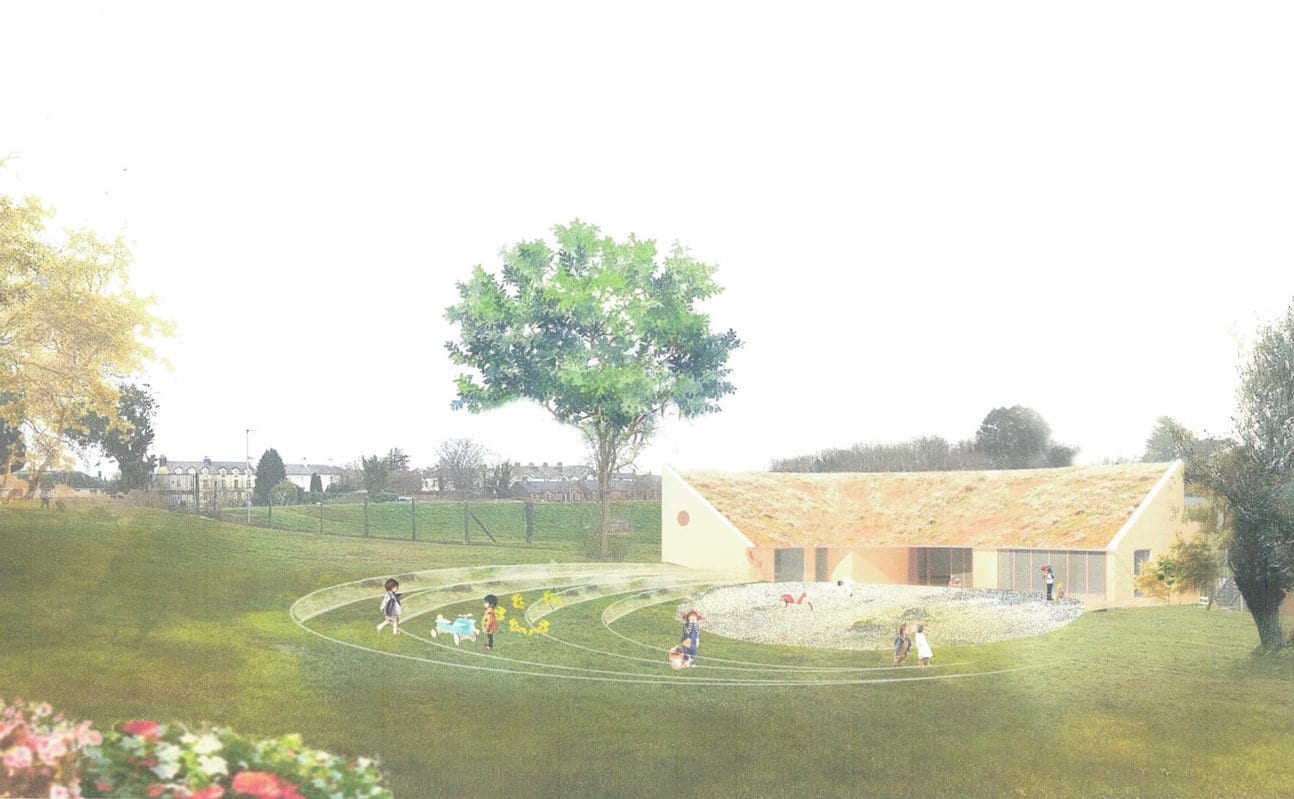 A new high-quality pre-school and learning development centre could be built in a Co Armagh village.

Bessbrook is the chosen location for the new Sure-Start Early Years centre, which forms part of an application for the overall redevelopment of the Bessbrook Pond site.

Papers submitted to Newry, Mourne and Down District Council for consideration indicate that five new jobs would be created if the development proceeds.

The proposal would see a new pre-school and learning centre being built just north of the village community centre, within the ‘pond field’ park.

The building would sit as a pavilion within the park.

It would have a ‘green’ or turf covered roof, sitting on the hillside.

Other features include a covered porch, a cloakroom and entrance, office, playroom, recess and quiet area, kitchen, family/staff room, toilets and storage.

There would also be an external play area – stretching to over 300 sq metres – with a small part of this covered.

The new centre is described as being “conveniently placed in the centre of the village and within walking distance for the majority of users”.

But for those travelling it would have 25 car parking spaces available.

A design and access statement indicates a venue that could also be given over to community use ‘after hours’.

It states: “The building has been placed as a pavilion on a steeply sloping site at the edge of Bessbrook pond field.

“The site is within the grounds of the existing Bessbrook community centre; the east side of the site will face the car park, the north side is facing towards the village.

“The proposal hopes to enhance the park as a contribution to civic amenity within the wider village. The park has been incorporated in the design to enhance learning about nature within the Sure-Start centre.

“It is proposed that the project can offer potential community use after daycare hours and that the external ‘amphitheatre’ created by the form of the building against the hillside will be a space for wider community events and gatherings (summer screenings, weekend events etc).”

The proposed building would ‘wrap around’ and enclose an outdoor courtyard which would be visible from all internal spaces.

The design statement adds: “This courtyard will lead to the larger park area to compliment the learning processes.

“Window sills and wall thicknesses have been widened to create natural alcoves and seating areas.

“Sinks will be easily accessible and part of the main play area to promote hygiene when using the w/c, garden play and arts and crafts and to contribute to active exploratory play.”

Early Years is the name adopted in 2005 by NIPPA – the Northern Ireland Pre-school Playground Association – and is an independent charity.

Its mission statement is to “promote and develop high-quality, evidence-informed early childhood services for young children, their families and communities”.

The exciting new proposals are due to be publicly advertised this week.

A recommendation will then come forward from planners at Newry, Mourne and Down District Council, with a decision expected later in the year.