A service of remembrance took place today at 11am at the Kingsmills Memorial Wall, organised by Families Acting for Innocent Relatives (FAIR), and officiated by Rev Graham Middleton 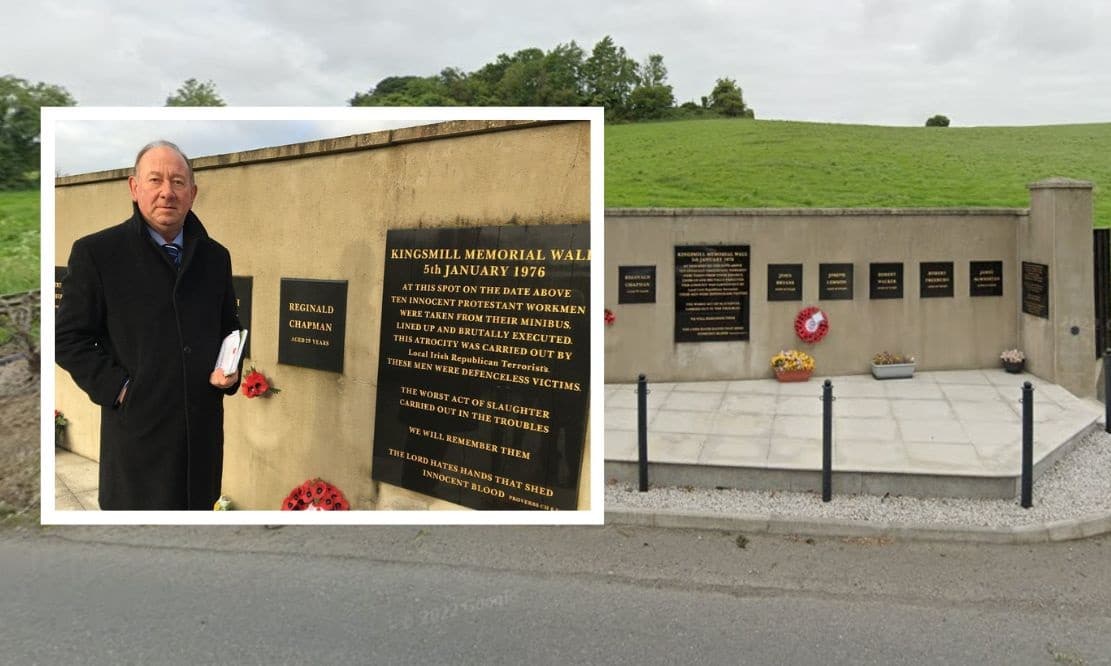 “The 47th anniversary of this callous and brutal attack, in which those behind this massacre murdered ten innocent hard working men, brings yet more sadness for the families of those who were so cruelly cut down.”

Those were the words of Newry and Armagh DUP representative William Irwin MLA, who attended the service of remembrance at Kingsmill on Thursday to mark the anniversary of the killings on January 5 1976.

The service took place at 11am at the Kingsmill Memorial Wall, organised by Families Acting for Innocent Relatives (FAIR), and officiated by Rev Graham Middleton.

The Assemblyman added: “Despite the passing of 47 years, the pain and trauma has not diminished and as the officiating speaker Rev Middleton stated, it is vital to never forget or permit the re-writing of the history of this event and indeed that is why it is so important to continue to remember this horrific attack.

“There is still a huge importance attached to the pursuit of justice for these murders and I would again encourage those in the wider locality who may have some information which could assist in prosecution and justice for this heinous crime to come forward and supply this information to the PSNI.

“Previous investigations and reviews have raised hopes but sadly have led to little comfort for the families, they deserve to see justice served.”

The spokesperson for Newry and Armagh TUV, Keith Ratcliffe, said that he is “passionate” about obtaining justice for innocent victims.

He commented: “It is telling that so close to the dawn of a new year we have an annual reminder of the evil of Republican terrorism”, reflecting on the attack which resulted in the deaths of ten Protestant textile workers and left only one survivor.

“Even by the brutal standards of the IRA, the callous and openly sectarian nature of the murders stands out. Yet, almost half a century later, the murders remain unsolved.

“Indeed, the IRA continue to deny involvement in the massacre and the Irish Government have displayed a telling reluctance to cooperate with investigations into the murders.”

He added that the victims have had to endure “insults heaped on their heads.”

He said: “In 2018, Barry McElduff mocked them in the crudest fashion imaginable by parading around with a loaf of Kingsmill bread on his head, on the anniversary of the massacre. In any normal country this would see the end of any involvement in public life. Yet McElduff is the current chairman of Fermanagh and Omagh Council.

“Remarkably, in Newry, a children’s’ play park has been named after Raymond McCreesh, an IRA terrorist who was arrested while in possession of one of the weapons used to carry out the Kingsmill massacre. This was not some unofficial naming but something which has been rubber-stamped by the local council.

“Such celebration and glorification of someone linked to such a brutal sectarian massacre is scarcely believable but it is exactly the sort of thing which the minority community in this area have been forced to accept.

“I am passionate about obtaining justice for innocent victims. The Belfast Agreement has made that very difficult yet I’m keen to ensure that the powers that be are held to account.”