After the morning parade, the day's events - compered by UTV's Paul Clark - will continue with a military gun salute at 12 noon, signalling the start of an exciting programme, with musical performances, aerial and ground displays, and fun-filled activities for all ages 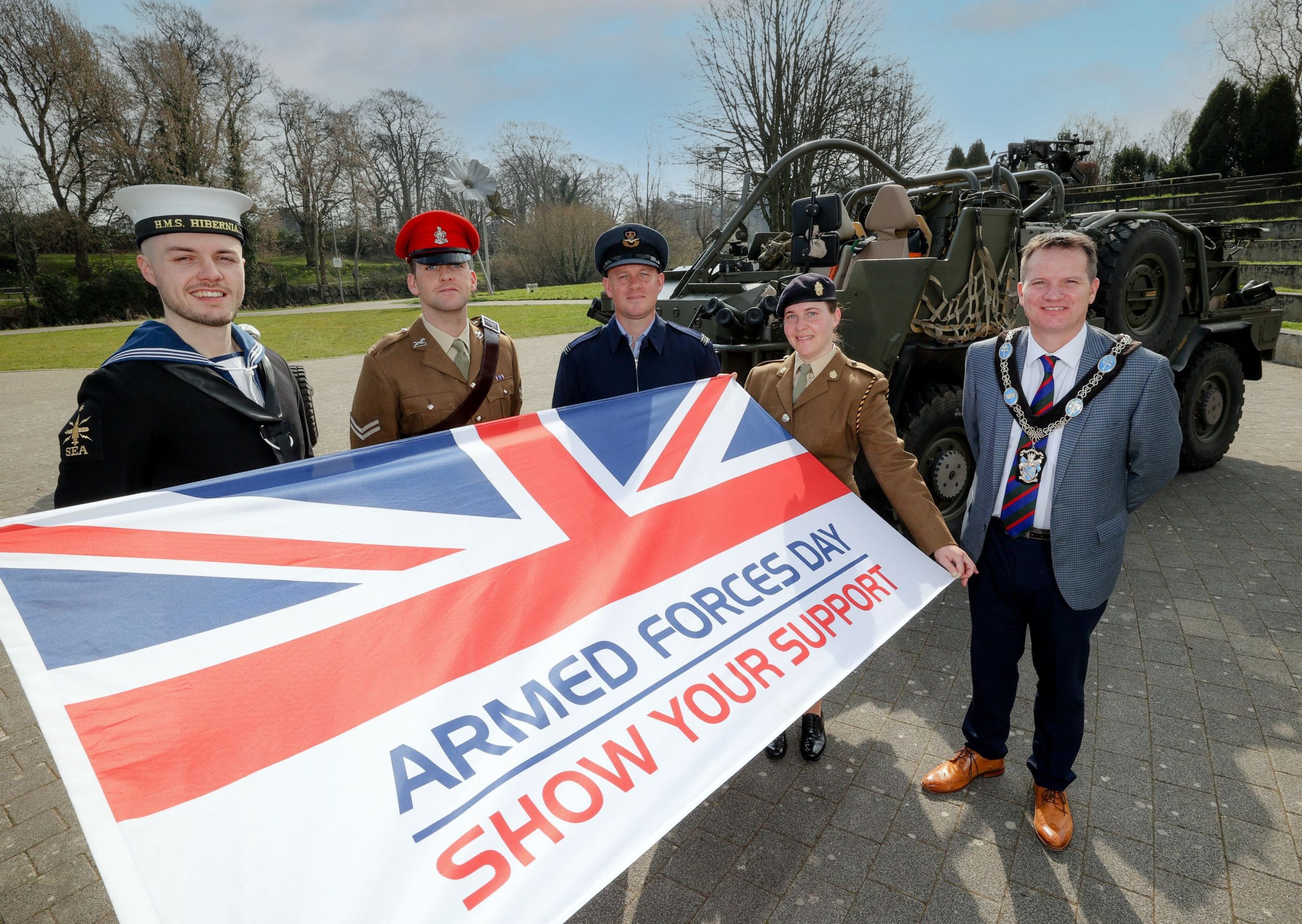 ABC Council is set to host a mega military and musical spectacular as it leads the region in organising this year’s Armed Forces Day celebrations in Banbridge on Saturday, June 18.

Visitors throughout Northern Ireland are expected to come out in force to the County Down town for an epic day of celebrations designed to honour the Armed Forces community – serving troops, reserves, cadets, veterans and their families – for their service and sacrifice at home and overseas.

Having long advocated for this flagship event to be held in Banbridge, Lord Mayor Alderman Glenn Barr said: “Our borough has a proud history of supporting the efforts of the Armed Forces. We admire all they do to defend our nation, and appreciate all the sacrifices they make while serving their country with great distinction.

“We have gone all out to make this year’s Armed Forces Day celebrations one of the biggest and best to date, with a first-class entertainment programme guaranteed to attract huge numbers to the borough. So join us for a fantastic day of free family fun.”

A Drumhead Service held at Banbridge War Memorial at 10.30am will mark the start of the event.

Her Majesty’s Lord-Lieutenant for County Down, Gawn Rowan Hamilton, will gather with Armed Forces representatives, politicians, local clergy and a council delegation to honour Northern Ireland’s men and women who paid the ultimate sacrifice.

In a spectacular display of show and pageantry, over 500 serving personnel, cadets, veterans and accompanying bands, will step off following the service and parade from Newry Street to Banbridge Rugby Club at Rifle Park.

Spectators lining the parade route can extend a warm welcome to the Armed Forces community while taking in the impressive display of military splendour.

Banbridge Rugby Club will be open to visitors from 11am.

A military gun salute at 12 noon will signal the start of an exciting programme, with musical performances, aerial and ground displays, and fun-filled activities designed to appeal right across the age range.

UTV presenter Paul Clark will compere the event and guide the audience through the day’s activities.

The event is guaranteed to have spectators flying high when the world’s premier aerobatic display team, the Red Arrows, put on a spectacular show brightening the skies with a dazzling display of colour.

Prepare to be blown away by the most famous bagpipe band on the planet, the Red Hot Chilli Pipers, as they fire up the crowds with their ground-breaking fusion of traditional Scottish music and rock/pop anthems known as ‘bagrock’.

Premier rock ‘n’ roll band Soda Popz will have the audience all shook up when they take to the stage and pay tribute to the fabulous music of the 1950s/60s supported by fancy footwork by Ballroom Blitz NI. Get your dancing shoes on and join in the live demos.

The world-famous Band of the Royal Irish Regiment and the hugely popular Military Wives Choir are sure to steal the show.

Get up close to a fleet of military vehicles, stands and displays as well as vintage aircraft provided by the Ulster Aviation Society.

Watch teams from the Armed Forces do battle with local groups as they scrum their way to victory in a rugby 7s competition.

Children will be delighted with the range of activities they can try throughout the day including archery, paintballing, mini assault course, climbing towers and much more.

There will also be live coverage by the British Forces Broadcasting Service at the event. A number of military charities will also be present.

The day will start to draw to a spectacular close at 4.45pm with an extraordinary Beating Retreat performance by the Band of the Royal Irish Regiment accompanied by bugles, pipes and drums of the 2nd Battalion Royal Irish.

Two road closures will be in operation on the day of the event. Newry Street will be closed from 7am until 12pm and Ardery’s Lane from 7am until 7pm.

Visitors can avail of free parking at a number of event-designated car parks all conveniently located close to the town centre and within walking distance to Banbridge Rugby Club.

To accommodate the needs of wheelchair users and people with limited mobility, a number of pre-bookable spaces will be available at Banbridge Baptist Church in Kenlis Street. Spaces can be booked online at armedforcesdayni.co.uk/parking. There will also be a designated drop-off point on Arderys Lane.

Visit armedforcesdayni.co.uk for further information on the programme, parade, parking and road closures.