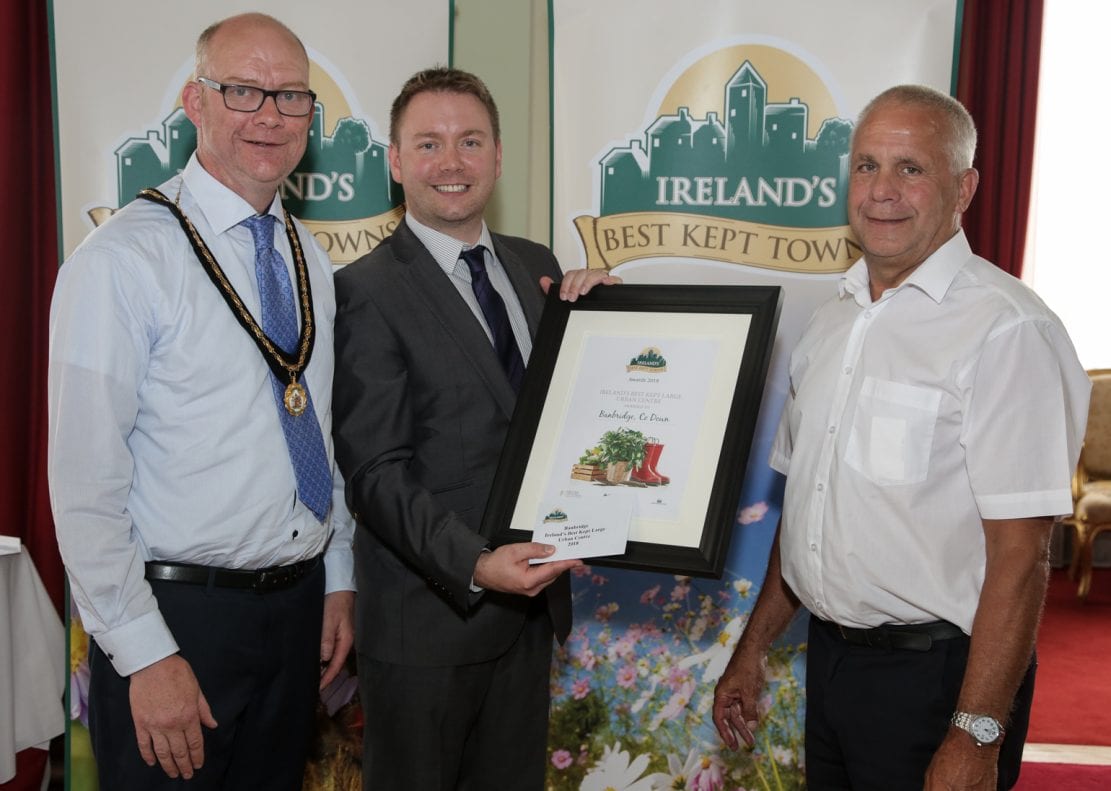 Banbridge is celebrating after being walking with one an all-Ireland wide ‘Best Kept’ award.

The Co Down town was crowned the ‘Best Kept Large Urban Centre’ in the whole of the island of Ireland.

It beat Derry/Londonderry, Bray and Leixip to the award in Ireland’s Best Kept Town Awards 2018.

Armagh had been a finalist in the ‘Large Town’ category, alongsid Monaghan and Ballina, but it was the latter which lifted the trophy.

Banbridge’s award was presented at the Belfast Harbour Commissioners Office during a ceremony this week, where the Northern Ireland initiative ‘Best Kept Awards’ partnered with its southern counterpart, ‘Tidy Towns’ to honour the best towns north and south.

The All-Ireland partnership with the Best Kept and Tidy Towns Awards has been running for 23 years.

Entrants were marked on a number of factors including cleanliness, the appearance of buildings, the presentation of roads and public facilities, and the natural environment.

Deputy Lord Mayor, Councillor Paul Duffy, who received the award on behalf of the council, said: “I am delighted that Banbridge has been recognised as the Best Kept Large Urban Centre in Ireland.

“The award is a huge credit to the residents of the town who take great pride in their environment and to the local businesses who make the town centre such an attractive and welcoming location.

“The award also highlights the commitment the council have in maintaining and improving the standards which make the town such an inviting place to live, work and visit.”

Doreen Muskett, President of the NI Amenity Council, who run the Best Kept Awards, commented: “The awards serve to recognise the towns that have committed to making aesthetic and practical improvements to benefit the wider community.

“Each resident should be very proud of this incredible achievement. I am delighted that Banbridge has been recognised amongst Ireland’s most beautiful spots.”

The judges highlighted a number of areas in which Banbridge excelled and offered the following comments in their report.

“Banbridge has a mix of commercial buildings, public buildings and monuments. They are all well maintained and give the appearance of a town where the public and private sectors all take pride in the town’s appearance”

“Street lighting in the town centre is modern and crisp in design.  There are a number of recycling points, all of which are tidy thereby encouraging residents to use them.  Particularly impressive is the main recycling centre on the Scarva Road with provision for a wide range of recyclables laid out in an expansive manner and kept very tidy.”

“There are a number of areas in Banbridge where the natural environment has been maintained and enhanced.  Solitude Park has been imaginatively landscaped with a mix of seating areas, walks and an area for the performing arts.  A wide range of shrubs and trees have been planted and, in time will make this an even more attractive area”

“There is a large number of private housing developments, a great majority of these residents have a very clear sense of pride in the appearance of, not only their houses, but also their gardens.  Many are impeccably maintained with a wide range of shrubs, trees etc.”

“The town was notably litter free. Apart from the sense of civic pride which residents seem to have, there could be a couple of reasons for this.

“Firstly, the presence of two street sweepers on duty in the town centre and secondly, the presence of a large number of litter bins in conspicuous positions, none of which were overflowing.  Bins specifically for dog fouling bags were also evident in residential areas. Car parks were free from litter and cigarette butts.”

In summing up their report the judges commented: “Banbridge is a town which has a vibrant commercial area and many residential developments.  In all of them there is a sense that the residents take pride in the appearance of their area and this is to be commended.”