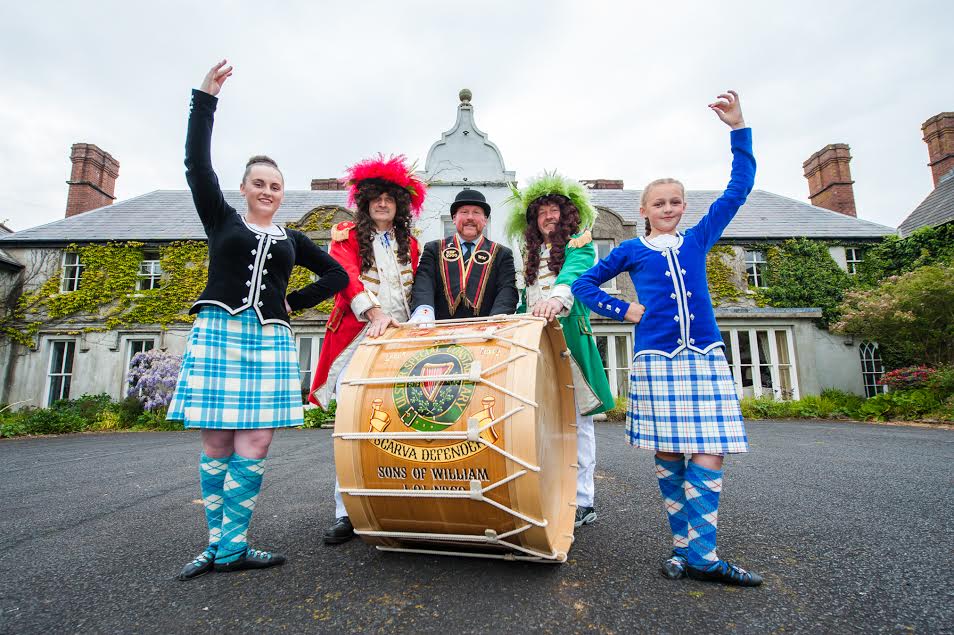 The Sham Fight is one of the largest cultural events in Northern Ireland’s calendar and upwards of 100,000 people are expected in Scarva on Thursday, July 13.

The small and quaint Co Down village has become renowned for hosting the biggest one-day event, at a single location, anywhere in the Province.

The annual clash between King William and King James and the massive procession through Scarva – hosted by Sir Knight Alfred Buller Memorial RBP 1000 – is now firmly established as a major tourist attraction.

Sovereign Grand Master of the Royal Black Institution, Millar Farr, said: “The annual Sham Fight at Scarva is truly a day like no other. It is a wonderful occasion packed with music, pageantry, culture and history – a day the whole family enjoy and an event that unfailingly attracts tens of thousands of spectators from across Northern Ireland and beyond.

“It is amazing such a large-scale re-enactment and parade is organised on a yearly basis by a small team of volunteers, and I pay tribute to the members of RBP 1000 who deserve to be commended for their ingenuity and commitment. Due to their sterling efforts, the Sham Fight is rightly regarded as one of the flagship events of the summer and the parading season.”

This year, the event will have an added and new dimension, with the provision of a cultural field, showcasing Lambeg drumming, highland dancing and other activities for the many visitors to enjoy.

Chairman of The Royal 13th organising committee, and worshipful master of RBP 1000, Sandy Heak, said: “We know people keep coming back every year to sample the unique and family friendly atmosphere, so we are delighted to introduce the concept of a cultural field for the first time with the hope of further expansion.

“This additional facility will showcase the cultural heritage of Northern Ireland with visitors able to enjoy Lambeg workshops and highland dancing performances, among other activities and entertainment.

“We believe such a cultural experience will not only enhance our annual celebrations, but also create greater understanding of the traditions of the Loyal Order fraternity.”

The Sham Fight at the Demesne is the only remaining one of its kind in Ireland. At the top of the field where the re-enactment is staged, is the chestnut tree where King William tied his horse on the way to the Battle of the Boyne and where his troops rested.

King William is played by John Adair and King James by Colin Cairns. The main protagonists are accompanied by soldiers in period costume and a number of horses.

The Sham Fight will be preceded by a large parade, with up to 90 preceptories and as many bands taking part in the procession through the village. Approximately 4,000 members of the Royal Black Institution will step out, accompanied by a wide selection of music, including flute, pipe, accordion and brass bands.

The main procession will leave the assembly field on the Gilford Road at 11.15am and proceed through the village to the Demesne. Tens of thousands of spectators will line the one-mile route to witness the spectacle.

Poignantly earlier in the day, members of Scarva Royal Black Preceptory will lay a wreath at the village memorial to local members of the security forces who were murdered during the Troubles.

This year’s event will be held in partnership with the British Heart Foundation in Northern Ireland (BHF NI), raising funds for research into and awareness of heart disease.

Members of the Institution have a distinguished record for charitable outreach, raising nearly £700,000 for various good causes on a biennial basis since 2002. Earlier this year, the Loyal Order presented £107,000 to Macmillan Cancer Support.

The highly anticipated Sham Fight will take place at 1.30pm, prior to the religious service, which is scheduled to commence at 2pm.

The return parade is scheduled to leave the Demesne at 3pm, led by Portadown District.

Also on July 13, Lurgan District No. 2 will take part in their annual parade in Bangor.

The traditional procession will include 12 preceptories and nine bands. The main parade will proceed from Castle Park Avenue at 11.15am, making its way through the seaside town along Dufferin Avenue, Grays Hill, Queens Parade, Bridge Street, Main Street and Hamilton Road.

The principal speaker during the religious service will be Canon Will Murphy, Imperial Grand Chaplain.