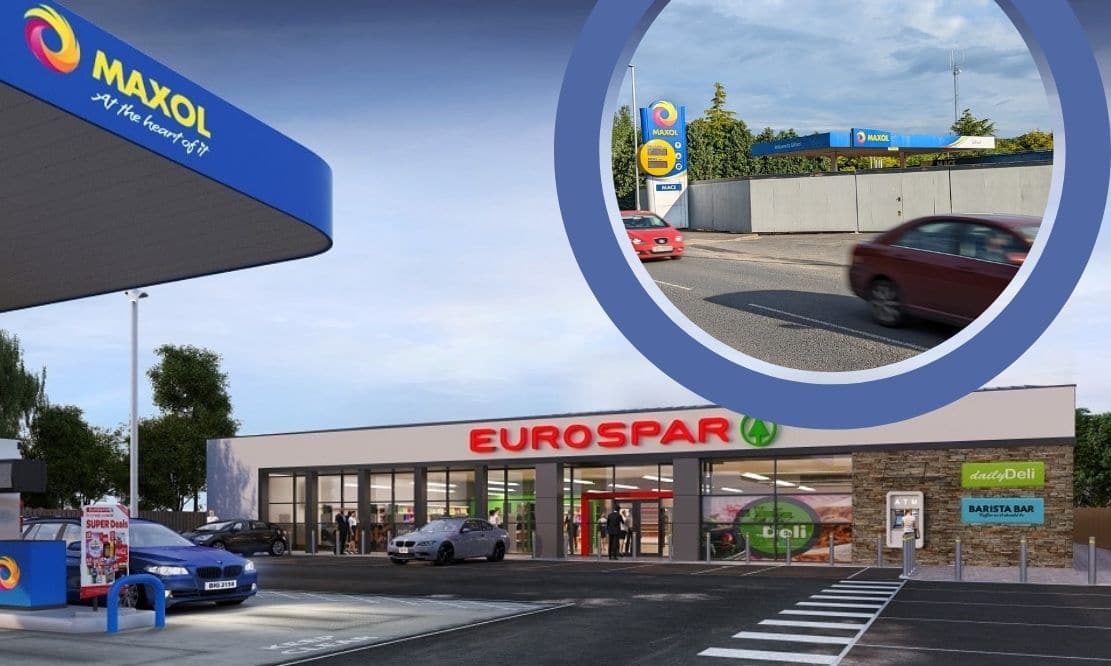 A new £2 million EuroSpar supermarket and filling station has been finally been given the go-ahead in Gilford – more than five years after plans were first drawn up.

Armagh City, Banbridge and Craigavon Borough Council’s planning committee has finally approved the application – which will create around 30 full and part-time jobs – this week.

The application, lodged by Whittaker and Watt Architects on behalf of Henderson Group Property sought permission to demolish an existing petrol filling station forecourt and convenience store at 1 and 4 Banbridge Road, Gilford.

Permission was also sought to construct a new petrol filling station forecourt and convenience store with associated retaining wall, access and parking including the change of use of existing commercial premises to a new car parking layout.

A report presented to members of the committee ahead of the meeting noted council’s planners opinion the application should be approved as the proposal complies with the strategic planning policy statement (SPPS) and all other relevant planning policies.

“Officers have assessed all other material matters, including those raised by representation and have determined that any material harm which may arise will be adequately and properly addressed by means of attaching planning conditions,” reads the report.

Discussion of the application started with a number of members of the committee excusing themselves from proceedings for several reasons.

Following this, those councillors that remained in the debate – Alderman Glenn Barr, Councillor Sam Nicholson, Alderman Kenneth Twyble and the Committee’s Chair, Alderman Gareth Wilson – heard from two MLAs, Jonathan Buckley and Doug Beattie, both of whom spoke in favour of the application.

Addressing the chamber, the DUP’s Jonathan Buckley MLA said “the lack of a service station of this nature, with its associated parking and fuel pumps is in my opinion, and indeed many of my constituents, having a real social and economic impact on the people of Gilford”.

“They simply cannot understand the delay we have had to date.”

UUP leader, Doug Beattie MLA said he had two questions about this application – is there a need for it and is this an appropriate proposal?

“If I take the second question first, the answer is absolutely yes, of course it is, this is a pre-existing site of a petrol station and convenience store previously, so it is absolutely appropriate,” he said.

“That takes us to the first question, is there a need for a petrol station and shop in Gilford and the answer to both is yes.”

Following this, the chamber heard from Stewart Beattie KC representing a “local trader and investor” in Gilford. He told the chamber his client had sought a meeting with planners to discuss the latest information about this application.

He said a meeting had been arranged initially for September 5 and at planning officer’s request, his client provided written material in advance of that meeting in good faith.

The meeting was subsequently cancelled and a new date, September 23, was offered for the meeting. However, that meeting never took place and the application was subsequently listed to appear before this committee with a recommendation to approve.

Mr Beattie KC said his instructing solicitors wrote to the planning office seeking an explanation and were told, by email, on September 30 that for “reasons of prudence” the meeting would not take place.

The barrister told the chamber “this Council has broken its promise” and claimed his client had been prejudiced by these matters.

“It is with very considerable disappointment my clients, and their experts, have instructed they do not wish to participate in these proceedings because of the unfairness that has been visited upon them,” he said.

Following an adjournment of almost 35 minutes for the committee to seek legal advice, the committee’s Chair, Alderman Wilson, said the committee takes “pride in its transparency” and invited both Mr Beattie KC and the barrister acting on behalf of the applicant, Stephen Shaw KC to “make their points” on these issues.

He asked Mr Beattie if he could explain what points his client would have been keen to discuss at the proposed meeting. However, Mr Beattie KC explained he would not do so.

“This forum is not a substitute for that and while I appreciate you may be sceptical you don’t offer meetings and and then just cancel them for reasons of prudence,” said Mr Beattie KC.

“That having happened, my clients acted to their detriment and what I am not going to do, and cannot be expected to do when my client has instructed me that this is unfair, is perfect the situation that has been created, by having some sort of discussion over what might have been said at the meeting with the committee.

“That is not a satisfactory way to deal with this. There was a representation made, a promise of meeting made that did not happen, papers were handed over in good faith in expectation of a further meeting and that is prejudical.

“As to what would have been discussed, I don’t know, I was never going to go to the meeting, the expert witnesses were and my instructing solicitor may have gone but because there was no meeting I am not going to speculate what might have been discussed.”

Mr Shaw KC told the chamber the task of the committee is to make a decision on the planning merits of the application.

“This is not the first time this application has come up for consideration, there is a very long history but it is important, as a starting point, to recognise that whatever meeting was in contemplation a little while ago, was not the first occasion or a primary occasion, it was at the end of a very long process,” he said.

“The proper context for this is there is a long running, very careful examination, of the planning merits by your officials that we commend them for today, and we applaud, and we are seeking to encourage you to go with.

“There is no right to a meeting as such, the meeting was asked for and not held with the reason give that it was not prudent. That echoes what we were told in a letter from Mr [Damien] Mulligan [Council’s head of planning] on September 27, when there was a decision not to meet with our representatives who wished to voice their concerns about how long this process had lasted.”

Following another adjournment for legal advice which lasted more than 15 minutes Mr Mulligan told the meeting officers did agree in principle to meet representatives of both the applicant and third party objector but in the end, “in the interest of fairness” officers decided not to meet either party.

Speaking on behalf of the application, Mr Shaw KC said that following “careful rigorous scrutiny of the scheme over a very lengthy period” his client was “pleased but not surprised that the planning merits of the scheme are now recognised by council officials”.

During the debate stage, Councillor Sam Nicholson said it was a strange scenario to be in as the committee was “only listening to one side, as the objector has taken the stance he does not want to engage with us tonight in relation to this”.

Despite this, he said he was of the view this application has been “round the block” and said “careful consideration” has been given to its merits.

Alderman Kenneth Twyble said he knows Gilford very well and knows of the “need for a petrol station” in the village and said it “needs to be returned” before telling the chamber he is “clear in his own mind about the case”.

Alderman Glenn Barr said it has been “a long enough” debate and said he too was happy the information in front of the committee would allow it to draw the “matter to a close”.

The proposal to approve was seconded by Councillor Nicholson who said there has been a “very careful, rigorous scrutiny of this application” before other members endorsed the proposal.