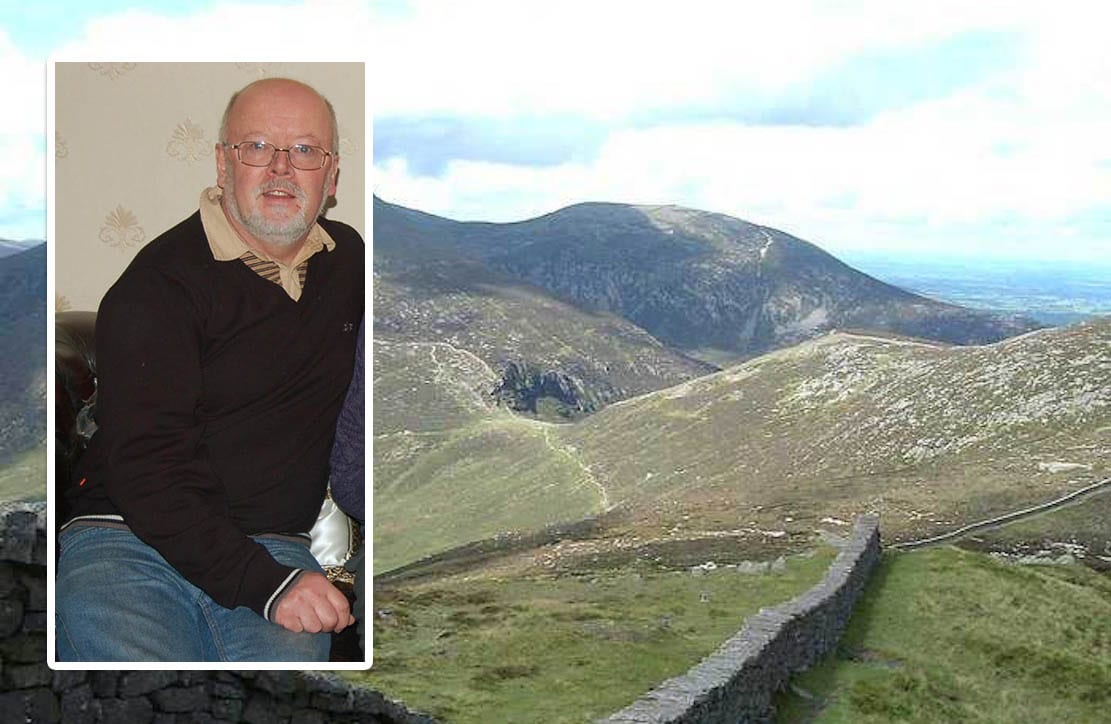 A south Armagh man who tragically fell to his death in the Mourne Mountains on Sunday has been named.

Sean Byrne (main picture), from Camlough was one of two men who passed away in separate incidents, yesterday afternoon.

The second was former RUC Chief Superintendent Robbie Robinson, who had served as a District Commander in Co Down.

“The news of our respected former Treasurer and esteemed Trustee’s death has devastated us all,” said a spokesperson for Craobh Rua Camlocha Hurling Club.

Adding: “He had a great love for our Club and he showed this over the years by the giving freely of his time and experience to help us develop and become rooted within our community.

“He possessed great gifts of commitment, integrity, calmness and care. He loved his family, his community, Gaelic sport and culture.

“No words we can say will lessen the shock and pain of his family as they struggle to come to terms with this news. However we will be there for them just as Seán had been here for us over the past thirty years.

“We convey our deepest sympathies to the families of both those killed whilst climbing yesterday in the Mourne Mountains.

He added: “Seán was a popular and highly respected family man, a friend to many of us.

“He had a great love for Craobh Rua Hurling Club and the local community.

“Seán was rest assured to be seen at any fund raising quiz or event that took place here in the village.

“He was a keen photographer and would be present at hurling, cycling, running and swimming events snapping away.

“The Byrne family had a long coal and oil business tradition and would be known to many throughout south Armagh.

“We can assure them that they are in our thoughts and prayers at this dark and devastating time. We as a community will give them what support we can.”

Mr Robinson, who was in his 60s, lived in Banbridge with his wife and their son.

“He was an absolute gentleman. He was always so pleasant, always with a smile on his face.

“I would have met him every Sunday morning at church and he always had a wave and a smile for you, and many a morning we would have had a laugh together.

“Robbie was always very active. He would have been walking in the mountains quite a bit and would have been a keen cyclist. He was very fit and very much an outdoor person.”

He added: “Everyone is in deep shock. People haven’t had a chance to take it in.

“Robbie was an absolute gentleman who was always smiling and had time for everyone.”

The deaths took place on Slieve Commedagh and on Wee Binnian around midday, the PSNI confirmed.

“Police and other emergency services responded, but unfortunately both men died at the scene.

“A third male was also rescued from the mountains with a suspected broken ankle following a fall close to the Saddle at around 2.30pm.”

Both men died after falling from crags, according to the Mourne Mountain Rescue Team.

A spokesperson for the team described how the day unfolded for those involved in the search and rescue.

“At 1210hrs the team received a call to respond to an incident involving a male walker who had fallen from a crag on Wee Binnian.

“The team responded but sadly the individual was pronounced deceased at scene by the team doctor. Rescue helicopter 116 from Dublin flew to the scene but due to conditions was unable to assist.

“Team members, along with local police recovered the individual to the care of undertakers.

“While this incident was being dealt with a second call was received, requesting response to a separate incident involving two walkers, one of whom had fallen from crags on the east side of Slieve Commedagh.

“The other walker had become cragfast in trying to reach and assist the casualty.

“A crew was dispatched to the scene and unfortunately found that the fall had again been fatal.

“Team members set up a rope rescue to bring his cragfast companion to safety and recovered the deceased with assistance from the PSNI SAR team.

“During the second incident, a third call was received to assist a male walker who had sustained a lower leg injury near the Donard/Commedagh coll.

“A team member was able to divert to the scene and stabilize the casualty before handing him over to the PSNI air support crew who transferred him by helicopter into the care of NIAS.

“A total of 21 members responded and the team stood down at 2115hrs.

“We would like to thank the PSNI, ICG, HMCG, NIAS and local landowners for their assistance.

“To have two fatal incidents in the course of a day is an anomalous situation and our thoughts and sympathies are with the families of the deceased.”

“This week the community of Camlough and indeed wider South Armagh has been plunged into sadness at Seán’s untimely death.

“Mr Byrne was a widely known and well respected member of our local community. He was deeply involved in sport, and was a Trustee and former Treasurer of the Craobh Rua Camlocha Hurling Club.

“Our thoughts and prayers are with his family and friends at this very difficult time. This is a very close community and I know everyone will rally around the family in the days, weeks and months ahead.”

He added: “Unfortunately Seán wasn’t the only one to lose his life in the Mournes on Sunday. Banbridge man Robbie Robinson also tragically lost his life. My thoughts and prayers are with his family and friends at this difficult time for his family also.’

“At the weekend the volunteers from Mourne Mountain Rescue Services along with Air Support battled the extreme conditions in an effort to help the fallers. We thank them for their service and for their efforts this weekend and indeed always.”

DUP MLA Carla Lockhart added: “Our thoughts and prayers first and foremost are with the two families who have been bereaved.

“No one can prepare for that knock at the door which informs them of the death of a loved one. Conditions on the mountain had deteriorated and sadly this led to the two deaths.

“I want to praise and thank the PSNI and NIAS for their immediate response but make special mention of the Mourne Mountain Rescue.

“These people give of their time voluntarily and are always on hand when they are needed. On this occasion they had to deal with two deaths and that will leave a lasting impression.

“To all those who responded I want to say thank you. The two families will be in my prayers for the days ahead as they come to terms with their loss.”