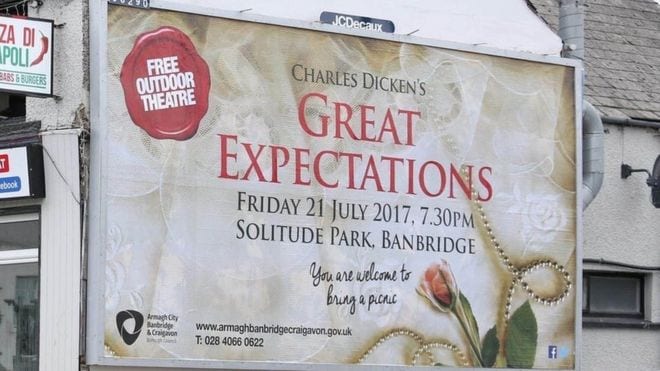 A grammatical mistake on an advertising billboard which cost the ratepayer £1,200 has been put down to “human error”.

Given the fact it was an event to celebrate a “literary giant”, the council decided that “it was the right thing to do”.

The free event was held on July 21 at Solitude Park in Banbridge.

However, the reprinting of the material cost around £1,200, which included £140 on correcting 48 sheets, £95 on delivering additional leaflets, £295 on reprinting advertising boards, £332 on flyers and posters and £290 on a window vinyl.

A spokesperson for the Council said: “To promote our outdoor theatre production of ‘Great Expectations’ by Charles Dickens, we produced a variety of advertising and publicity materials to maximise public awareness of this exciting free event.

“Unfortunately, due simply to human error, a misplaced apostrophe was not picked up.

“Discovering the error, we weighed up whether or not to replace the material and, given that the event was a celebration of such a literary giant and in line with our own commitment to best practice, decided that it was the right thing to do.

“We are delighted to report that the event was a huge success, with several thousand attendees enjoying the unique spectacle of ‘Great Expectations’ performed in the beautiful surroundings of Solitude Park, Banbridge.”