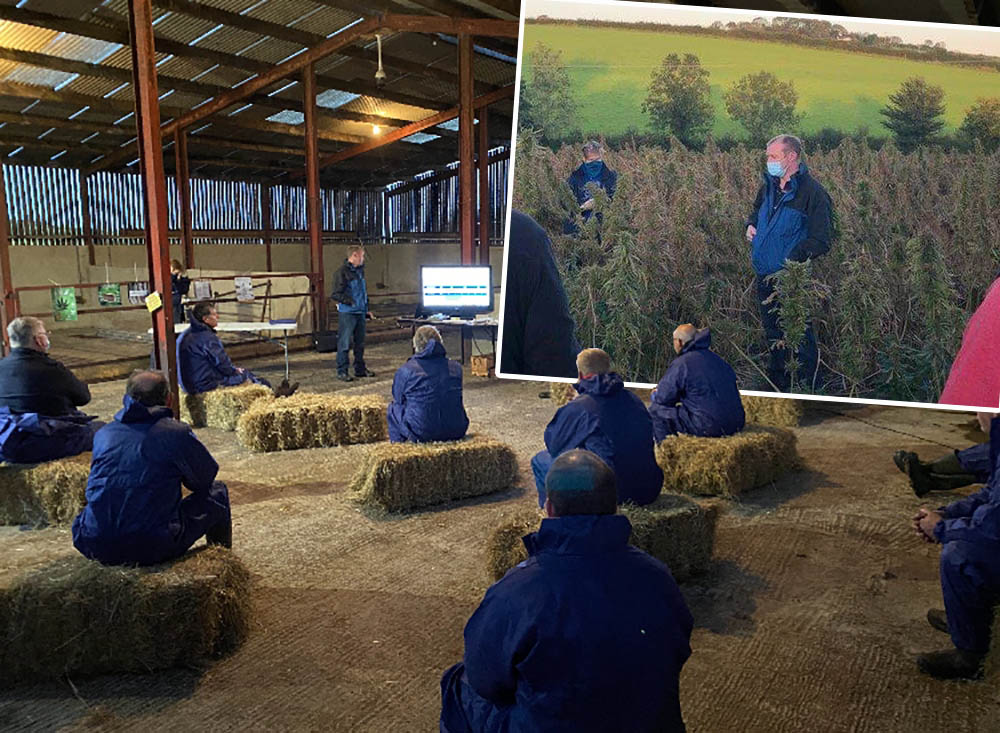 What has the car manufacturer Henry Ford, the lesser spotted but threatened barn owl and innovative farm practices on the Annett farm got in common?

Well in truth there is a little bit of Henry Ford inspired revolution taking place just outside Banbridge as one farmer is experimenting in the field of industrial hemp.

It should be noted that while hemp is a cousin of the cannabis plant, which may raise some eyebrows, industrial hemp that is licensed and grown in Northern Ireland has none of the dubious characteristics of its much vaunted cousin.

Hemp does have a long and distinguished history dating back thousands of years and more recently was a key material during World War Two, used in both the food and textile industries.

The uses for Hemp are multi factorial. Oil can be derived directly from the leaves, stems and flowers which can deliver benefits for our skin, hair and even our gums.

In addition many industrial giants across the construction, car manufacture and health sectors are actively exploring the potential benefits of the crop. Hemp is seen as a durable fibre with potential beneficial uses in the paper, feed, textile and nutrition industries. That is the big picture scenario on a global scale but in Banbridge the focus is on generating an alternative revenue.

Its passage to Banbridge came from a chance encounter between Banbridge farmer, William Annett, and a local chiropractor where hemp oil was a key ingredient in the treatment. William was exploring innovative ways of blending traditional farm enterprises with environmentally friendly alternatives and the potential of hemp caught his imagination. Innovation is to be welcomed and William has certainly displayed such a streak in exploring different land uses.

This works perfectly for William as he nestles next to an orchard in a rural landscape and the work practices involved are conducive to maintaining and preserving an ecosystem that allows for pollinators and best environmental practices.

A recent farm visit attended by the newly formed Environmental Farming Business Development Group were very interested to see and hear the experience that William has gained and the lessons learned. The group members attending had a wide range of farming backgrounds including dairy, beef, sheep, and arable, poultry, floristry and animal health. All those present shared the same aim of learning as well as sharing the challenges of making a living from the land while protecting the environment.

Both on site and in the farm shed, adhering to social distancing guidelines, the group heard directly about his experience to date. The local climate is conducive to the growing of hemp while the machinery involved right down to the combine harvester header are exactly what one would expect to find on a progressive arable farm enterprise.

The crop was established in late April when the pilot farmers across Northern Ireland collectively sourced and planted the seed after the last spring frosts had passed, and the plant very quickly germinated. Hemp can rapidly outgrow any competitive weeds thus eliminating the need for any chemical inputs; another benefit for the environment. The crop grew rapidly over the summer months and its large tap roots weathered the early summer drought with flying colours.

The group also observed the challenges of implementing a two metre riparian buffer margin around a watercourse on the farm and heard from William how conscious he is regarding bank erosion and water quality. His efforts to establish wild flower margins pending the outcome of his Tranche 4 Environmental Farming Scheme application were discussed along with a flurry of suggestions around the use of root wads along the river to help stabilise the bank and maintain the course.

At the conclusion of the informative and thought provoking evening those last to leave the venue had a glimmer of how nurture and nature meet when a barn owl landed beside the hemp field as dusk was setting. Among the most endangered species the barn owl is now in fact “red listed” in an effort to preserve the wise and noble creature.

A moment’s reflection was enough to confirm that the industrial hemp crop, the adjacent orchard and the river conservation seem to form the perfect blend of that much sought after, but sometimes elusive, coming together of farming practice and environmental conservation. The owl did not intrude, it simply observed and nodded in the affirmative.

No doubt Henry Ford would approve.